New York‘s “Gossipmonger” reports that Sicko director Michael Moore has “lost 30 pounds eating whole grains and sleeping more.” Okay, good to hear…but about a week and a half ago I was standing near the entrance of Cannes’ Majestic Hotel when Moore was getting into a van to be driven to Nice Airport, and my first thought was that he needed to do was cut down on the tonnage. Which I hope he does.

“The artful [Hollywood] journalist dodgers walk the line. They keep their best sources without burning them, give a little here, take a little there and get the true story across without making too many friends — or too many enemies.” — Variety columnist Anne Thompson on the departure of Sharon Waxman from the N.Y. Times Hollywood coverage beat, effective July 1st.
I’m sorry to see Sharon move on. I like her personally, enjoyed her pieces (that visit to a San Fernando Valley porn operation was hilarious), and wish her the best. I can understand Waxman feeling burned out and wanting to flex her journalistic muscles in other directions. (She’s going to write a book about “antiquities looting.”) Of course, political currents were a nudging factor in her departure.
“To my mind, Waxman’s days on that beat were numbered from the day Michael Cieply morphed from N.Y. Times movie editor to Hollywood correspondent. As her editor, Cieply could contain and protect Waxman. He’s an experienced Hollywood player who understands the entertainment beat’s intricate politics and knows how to massage a story’s language. On her own, Waxman tended to stomp through the Hollywood minefield, heedless of any explosions she might set off.”

More than a few regrets over being on the wrong side of the pond while the final Sopranos episodes unfold. Especially with the latest doings — Christophuh dead, Silvio shot and at death’s door, fat Bobby dead (blown away in a toy-train store)…the only top crew guy left standing is Paulie Walnuts. Plus Tony and family having bolted the McManse and gone into hiding. HE is back in NYC tomorrow (i.e., Tuesday) night, with a lot of view-on-demand catchup work to do.

New York‘s “Vulture” duo, Melissa Maerz and Dan Kois, are reporting that Lionsgate marketing exec and part-time photographer Tim Palen will be publishing Guts: The Art of Marketing Horror Films in July. (No mention of it on Amazon.com) Described as “a collection of his creepiest work,” the book will include a “pornographic, absolutely not-safe-for-work portrait” of Hostel 2 director Eli Roth.

“The rediscovery and rejuvenation of Richard Yates‘s 1961 novel Revolutionary Road is due in large part to its continuing emotional and moral resonance for an early 21st-century readership,” Jane Morris wrote some time ago on the Amazon.com.uk website. The film version, starring Leonardo DiCaprio and Kate Winslet under director Sam Mendes, will be released on 12.18.07 by DreamWorks. 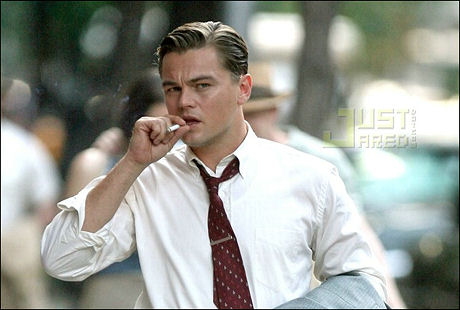 “April and Frank Wheeler are a young, ostensibly thriving couple living with their two children in a prosperous Connecticut suburb” — filming was done in Darien, Connecticut — “in the mid-1950s. However, like the characters in John Updike’s similarly themed Couples, the self-assured exterior masks a creeping frustration at their inability to feel fulfilled in their relationships or careers.
“Frank is mired in a well-paying but boring office job and April is a housewife still mourning the demise of her hoped-for acting career. Determined to identify themselves as superior to the mediocre sprawl of suburbanites who surround them, they decide to move to France where they will be better able to develop their true artistic sensibilities, free of the consumerist demands of capitalist America. As their relationship deteriorates into an endless cycle of squabbling, jealousy and recriminations, their trip and their dreams of self-fulfillment are thrown into jeopardy.
“Yates’s incisive, moving, and often very funny prose weaves a tale that is at once a fascinating period piece and a prescient anticipation of the way we live now. Many of the cultural motifs seem quaintly dated–the early-evening cocktails, Frank’s illicit lunch breaks with his secretary, the way Frank isn’t averse to knocking April around when she speaks out of turn–and yet the quiet desperation at thwarted dreams reverberates as much now as it did years ago. Like F. Scott Fitzgerald‘s The Great Gatsby, this novel conveys, with brilliant erudition, the exacting cost of chasing the American dream.”

Ulu Grosbard‘s extremely good and true Straight Time came out on DVD on 5.22, and it feels weird being in Italy (heading back to the U.S. tomorrow morning) and not being able to rent it, and not hearing or reading all that much about it online. Is everyone asleep back there? Except for Once and Knocked Up and I forget-what-other-films, the movie world is a relative desert right now, so the availability of Straight Time, Prince of the City and If… on DVD should be cause for a major heads-up. By the way, Los Angelenos will want to catch a special Straight Time screening and panel scheduled at the Los Angeles Film Festival on 6.23 at 6:30PM, at the Billy Wilder theatre in Westwood.

Live Free or Die Hard costar Justin Long has told Collider’s Steve Weintraub about how he plays the late George Harrison in Jake Kasdan‘s Walk Hard: The Dewey Cox Story, a kind of Elvis movie co-written by Judd Apatow.
Long also says that Jack Black will play Paul McCartney, Paul Rudd will portray John Lennon and Jason Schwartzman will embody Ringo Starr. The reason these guys aren’t listed on any semi-official cast lists is that they’ve basically done cameo walk-ons. Black did one day as Mccartney; the others did either the same or similar work time. The scene they shot is a goof on the Beatles trip to India in late ’67.

So far (i.e., Monday, 6.4.07 at 5:56 am Los Angeles time), 36% of the respondents on a Drudge Report poll are claiming that Barack Obama was the easy winner in last night’s Democratic candidate debate in New Hampshire. New Mexico Gov. Bill Richardson is second at 15%, and Hilary Clinton has a 13% rating. I don’t know what kind of political-philosophical leanings Drudge Report readers have, but it’s significant that Obama, who is always ranked second-place (behind Clinton) in general political opinion polls, has come out so far ahead in this instance.

“He’s 25 now. I met him when he was 16 years old. He’s one of these freaks of nature. He came out of his mother’s womb with a fully formed comic identity.” — Judd Apatow speaking about Knocked Up star Seth Rogen. 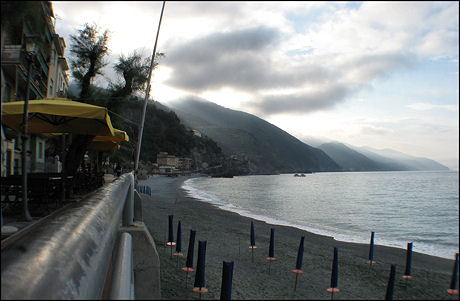 Film Ick‘s Brendon Connelly vs. Deadline Hollywood Daily’‘s Nikki Finke over Finke’s dismissal of Eli Roth‘s Hostel, Part II as “disgusting” without (apparently) having seen it.
Connelly is on the right side of the debate, of course. Hostel, Part II may indeed be vile, but it may have striking “whoa” moves at the same time. We all know what the torture-porn game is about and the core psychology driving it, but you have to give the devil (i.e., Roth) his due and watch the damn thing, or at least some of it.
Painful as it sometimes can be, you have to go to a screening (or a public performance) of a given film and sit through 20 to 30 minutes worth before venting an opinion. Obviously not about the entire film but about how those first 20 or 30 minutes were so painful to sit through that you either had to leave or shoot yourself, etc. Life is way, way too short to sit through a godawful movie. I am proud, proud, proud of my early walkouts.

Pirates of the Caribbean: At World’s End experienced one of the steepest post-Memorial Day opening drops in Hollywood history, plummeting 62 % for an estimated $43.2 million haul.
Box-Office Mojo’s Brandon Gray reports that the deeply loathed Jerry Bruckheimer-Gore Verbinski pic will “fall well short of” Pirates of the Caribbean: Dead Man’s Chest‘s $423.3 million tally by the end of its run. POTC: AWE has earned $216.5 million so far. At the same point, says Gray, POTC: DMC was down 54 % to $62.3 million for a $258.4 million total.
Judd Apatow’s Knocked Up took in roughly $29.3 million on approximately 3,700 screens at 2,871 theaters. It opened on the same date as last summer’s The Break-Up, which took in $39.2 million on the first weekend.