A reader I know who doesn’t want his name mentioned saw James Mangold‘s 3:10 to Yuma on 6.18. I’m running it mainly as a counterpoint to that recently posted AICN review that came out of the same research screening:
“I have to say that it was a very good film but nowhere near great or classic,” he begins. “There’s nothing remotely wrong with it — the story is solid, the performances were really good, but I was just expecting a little bit more. The whole movie seems to be building up to the end so a lot of the scenes in the middle dragged the film down a bit. I just wish the movie was a little more suspenseful and tense.
“That said, I was never bored and never wanted the film to end. The best part, for me, was Ben Foster, who plays one of the members of Russell Crowe‘s gang. He gives such a creepy performance you wish you could shoot him yourself. Both Crowe and Christian Bale give solid performances, but you expect that much from them. There relationship in the film reminded me a bit of Tom Cruise and Jamie Foxx‘s in Collateral.
“The movie doesn’t reinvent the western and probably won’t win any awards, but it’s entertaining enough. Fans of the genre should like it a lot. But if you haven’t seen the trailer yet, don’t watch it — it literally gives away 95% of the movie. I think lionsgate was forced to do this because they wanted to sell it as an action packed western, when most of the action doesn’t occur until the last fifteen minutes.”

These “Worst Scenes from the Worst Films Ever” clips went up two months ago — proof positive that HE is one of the hottest quickdraw sites on the net. (The getting-eaten-by-a-super-shark scenes are the best…obviously.)

I spent most of this morning tapping out thoughts about that high-expectation prestige movie that I saw yesterday afternoon. I also did a phone interview with a real-life guy who’s portrayed by a major actor in this film. I searched around online for everything I could find out, and I mulled and mulled and mulled.
It’s too early to pull the trigger, but I’m going to be a coy tease and say at least this, which is that yesterday afternoon’s film is absolutely one of the ’07 Big Ones — a movie that will definitely be on the top of the list of Best Picture contenders. I felt I was swimming in holy water five minutes into it. It’s a supremely sad broken-heart movie, a gripping procedural and a monumental political film that never once steps onto overt political turf.

7 Comments
McCarthy and his women

I went over to Book Soup last evening to talk with Variety critic Todd McCarthy about his new book, Fast Women: The Legendary Ladies fo Racing, which is about the world of pre-corporate American race-car competition in the 1950s and the women — Denise McCluggage and Evelyn Mull receive the lion’s share of McCarthy’s attention — who were a vibrant part of that scene. Here’s an mp3 of our chat, which I had to finish quickly in order to see Danny Boyle‘s Sunshine on the Fox lot at 7:30 pm….yeesh. 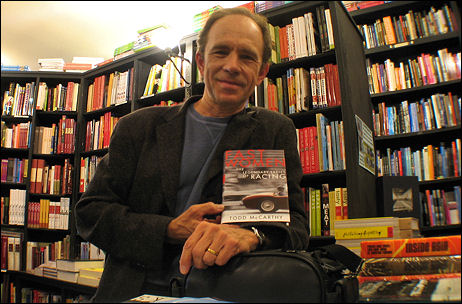 A restored version of William Wyler‘s The Big Country, a liberal-minded western about the pointlessness of dumb machismo and turf wars (and perhaps even a metaphor about the mentality behind the Cold War of the 1950s), is playing at the Academy on Friday night at 7:30 pm. This is a photo-chemical restoration funded by the Motion Picture Academy and the Film Foundation, with the hard work and heavy lifting done entirely by AMPAS preservationist Josef Lindner. 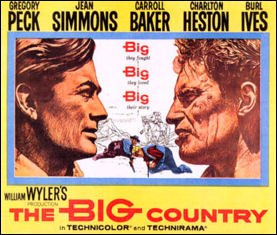 Country was shot in 35mm Technirama, which was an 8-perf process in which the negative went through the gate horizontally and was then optimized for 2.35 to 1 anamorphic. “It looks very nice, but it still has fading issues,” says Lindner. Fading issues? “Not generally but now and then, here and there,” he says. The restoration budget was the restoration budget, and apparently the cost of delivering a version that would look as full-out colorful and 100% dead perfect as the film did in 1958 was a little beyond the Academy’s means.
If you go by a description in the Technirama section of Widescreen Museum, Country‘s dp Franz Planer “gave the image a slightly desaturated look that conveyed the parched countryside in this film about a feud over water rights.” So maybe “slightly faded” is another way of describing the intended look of the thing.
In any event, protection masters have now been made and MGM/UA, which holds the video rights, can now create a much better looking DVD than the nickle-and- dime cheapie version they have on the market right now.

This is a textbook example of an “up” mood movie poster — Samuel L. Jackson and Josh Hartnett bathed in caramel sunlight, Jackson reaching for God’s grace, Hartnett and his kid smiling, etc. It’s a poster that says, “If you see our movie, you will feel as if you’ve taken an emotional quaalude.” No point in dissing this — feel-good sells have worked before and will work again — but Resurrecting The Champ is more measured and mature and matter-of-fact than this. It’s not into pushing highs, which I’m saying as a statement of respect. 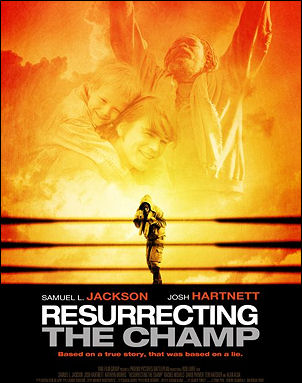 “I go to see the films because I like them. I like to be scared anyway. And I think you have a tendency to see things come in waves. If one thing is successful others follow in its wake. And the thing is, Hostel 2 is actually a better picture in every way. It’s very clever and Eli Roth is a tremendous talent, and has a tremendous eye as a director. The material makes a lot of people uneasy; it makes me uneasy.
“There’s another side of that too. The gore obscures, particularly in the minds of critics, some of the reasons why those movies are successful. The gore in movies like Last House on The Left was so new that it kind of slapped audiences in the face, ‘I can’t believe I saw that, let’s go see it again!’ Like driving past an accident.
“But people get desensitized to that in a hurry and you cease to get involved on a level where there are characters. It’s like watching people in a shooting gallery being knocked over one by one. You can’t go for gore for the sake of gore in movies anymore.” — Stephen King speaking to L.A. Times writer Mark Olsen.

Film Independent and the Los Angeles Film Festival is staging a poolside chat at Westwood’s W hotel next Tuesday night (6.26) from 7 to 8 pm called “Who Let The Blogs Out?” Possibly to be hosted by Variety columnist Anne Thompson and definitely to be attended by yours truly, the topic will be “the on-line merging of celebrity, industry news, and popular culture, and the rise of the blogger as the arbiter of information in modern day Los Angeles.”

There’s no telling if Deadline Hollywood Daily‘s Nikki Finke, Kevin Roderick, MCN’s David Poland, Defamer‘s Mark Lisanti or Perez Hilton will show, but the organizers are trying to reach these guys and/or get them to commit. It’ll be entertaining if Poland shows just to see his “I’m looking at you but I don’t see you because you don’t exist” look that he gives me whenever we cross paths.

Okay, I’ll roll with the $40 million weekend projection for Evan Almighty, but I say again it hasn’t been tracking all that fantabulously. By this I mean pretty well, but not necessarily big enough to indicate a slight or decent profit. Not for a movie that cost over $200 million and is costing the usual-usual to market.
Okay, the numbers have been climbing somewhat this week, and if those Christian families show up…aaah, leave it alone. Evan Almighty is the big media beat-up movie of the moment, but its first-weekend fate is in God’s hands now. I know it’ll fall big-time when Ratatouille comes out on 6.29.
I couldn’t make last night’s 7 pm screening due to being at Todd McCarthy‘s Book Soup book signing for Fast Women: The legendary Ladies of Racing, so I should really leave it alone and just pay to see it on Friday and suffer along with everyone else, like a good citizen.