Fantasy Moguls‘ Steve Mason is reporting that yesterday — Monday, July 9 — Paramount Pictures passed $1 billion in domestic ticket sales for 2007. This is apparently the earliest date that any studio has ever topped the billion dollar mark. And sometime this weekend, Paramount will surpass $1.046 billion for the year, breaking its annual record set in 1998, i.e., the year of Titanic.

In the ’80s Roland Joffe was a class-A director who made two prestige-level films — The Killing Fields and The Mission — and one pretty good one called Fat Man and Little Boy. His stock dropped in the ’90s with City of Joy (Patrick Swayze in India), The Scarlet Letter (a Demi Moore embarassment) and Goodbye Lover (a femme fatale drama with Patricia Arquette, Dermot Mulroney and Mary-Louise Parker). Then he showed up at the 2000 Cannes Film Festival with Vatel, a Gerard Depardieu period drama, and then disappeared for seven years. Now he’s finally back with Captivity, which looks from a distance like torture-porn. Joffe’s descent-from-grace story has to be coming out soon.

A.O. Scott‘s N.Y. Times review of Harry Potter and the Order of the Phoenix is up; ditto one from the L.A. Times‘ Kenneth Turan. Scott is thumbs-up, Turan is thumbs-down, and both are out a day and half before opening day. (Both reviews will be in the print editions tomorrow.)

“It’s probably more enticing to not quite know what is that they’re putting across. It’s always better when you can arouse imaginations and get them wondering without making things too explicit. That’s not the age and aesthetic of today. Everybody wants things right on the nose.” — a pseudo-knowitall talking to USA Today‘s Anthony Breznican about J.J. Abrams‘ Cloverfield trailer.

East Coasters are just about finished with it, but Californians have another couple of hours to get home and turn on Turner Classic Movies in order to watch Richard Schickel‘s Spielberg on Spielberg doc, which I suspect sight unseen is going to be one of the most exuberant acts of televised fellatio ever broadcast. A Spielberg career appraisal that fails to salute his truly exceptional films would be, of course, derelict, and you can count on Schickel begin his usual vigilant self in this regard. But will he have the cojones to speak the truth about Spielberg’s so-so, second-tier and flat-out-bad films — 1941, The Color Purple, Always, Hook, Amistad, A.I., Catch Me If You Can, The Terminal and Munich?

There’s an Impeach Bush and Cheney office set up in West Hollywood now (8124 W. 3rd St., Ste #216, Los Angeles CA 90048), and until last week I was thinking “okay, nice sentiment but you’re dreaming.” But then three things happened in rapid succession that changed my thinking.
First was the Scooter Libby commutation the weekend before last, and then being floored by the Bush-Cheney record of arrogance and stupidity as I watched No End in Sight last Friday night, and now there’s Bush refusing to allow his aides testify under oath before Congress over the Justice Department firings.
The man is smug, indifferent and blinded by rightist ideology — clearly one of the all-time worst U.S. presidents in the nation’s history. And yet the conventional thinking is that an impeachment drive is out of the question. The problem, sad to say, is that Democrats legislators aren’t made of sterner stuff. Bill Clinton came close to getting put out of office by impeachment for next to nothing — i.e, because he lied about getting a blowjob — but that didn’t stop the Republicans from pushing this issue for months and months and nearly bringing the executive branch to a standstill because of it.

Please, please look at the trailer for Charles Ferguson‘s No End in Sight (Magnolia, 7.27.07 in NYC — 8.3 or 8.10 in Los Angeles), and then go to the site and read the synopsis and reviews. Having seen it last Friday, I can say I’ve never been made to feel so real-world enraged by a movie in all my life. Ferguson’s merciless analysis of the Bush administration’s handling of the ever-worsening situation in Iraq beginning in May 2003 is truly sickening.
As of this writing, No End in Sight is an absolute contender for Best Feature Documentary. I had a somewhat thorough but not very detailed grasp of the situation in Iraq before seeing it. After seeing it I felt as if someone had leaned over and turned the lens and sharpened the focus. I’m hoping to speak with Ferguson later this week by phone, and then do a sitdown with him in Los Angeles later this month. I know full well that 97% of the moviegoers out there will do the typical vegetable thing — i.e, will never see it, never rent the DVD, never think about it. It would be nice if some would think about responding differently.
The website copy doesn’t lie: No End in Sight “is a jaw-dropping, insider’s tale of wholesale incompetence, recklessness and venality. Based on over 200 hours of footage, the film examines the manner in which the principal errors of U.S. policy — the use of insufficient troop levels, allowing the looting of Baghdad, the purging of professionals from the Iraqi government, and the disbanding of the Iraqi military — largely created the insurgency and chaos that engulf Iraq today.”
The most venal character the film is L. Paul Bremer, who was appointed by Donald Rumsfeld to be the head of the Coalition Provisional Authority in Baghdad. He exercised authority over Iraq’s civil administration from 5.11.03 to 6.28.04. Bremer’s decision to disband the Iraqi Army and remove Ba’ath party members from top government posts “helped create and worsen an atmosphere of discontent,” according to his Wikipedia page.

Sky News is reporting that some bad guys (the report isn’t specific) are waging a kind of online psychological war aimed at U.S. troops by posting a series of mock-up Hollywood film posters containing “a chilling message for U.S. troops in Iraq.” I would imagine that most U.S. soldiers over there will look at these images and go “haw!,” or certainly without breaking much of a sweat. If you ask me the zombies-in-Iraq-by- way-of-George Romero poster is the best. 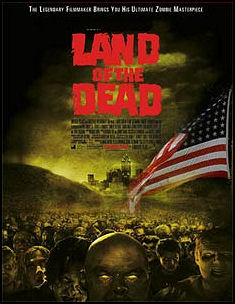 Leonardo DiCaprio‘s My Space page has just posted a video message about The 11th Hour (Warner Independent, 8.17), which he produced, co-wrote and served as one of the principal talking heads. Sound words, riveting message, and a film that definitely said it all but didn’t quite have that schwing when I saw it last May.


I don’t know if the trio behind The 11th Hour — DiCaprio and co-directors Nadia Conners and Leila Conners Petersen — have followed the suggestions I posted after seeing it at the Cannes Film Festival. Good and worthy as it is, I said it needed more in the way of personality and warmth and meditative passages.
“There’s no argument at all from this corner about the alarming things it says (and shows) about what amounts to a kind of mass global suicide,” I wrote, “but it’s a movie, and the fact is that it doesn’t breathe and engage the way a piece like this should. After 20 minutes or so it makes you feel like you’re being hammered. It needs to pull back and relax and…I don’t know, throw in some jokes or something. A little more heart and soul and meditation.
11th Hour “has exactly one laugh moment — a quote from Winston Churchill that says Americans “always do the right thing…unfortunately they only do the right thing after exhausting every last wrong possibility.” Or words to that effect.
“I hate saying this about a film I respect and that I want people to absorb for the content alone, but you can’t expect well-honed information and slam-bang visuals alone to do the trick. A movie needs to generate human warmth and aroma…some kind of emotional connection that really sinks in. As it is now, The 11th Hour is too dry and didactic, and it doesn’t even try to generate the amiable personality that An Inconvenient Truth had by way of the reborn Al Gore.”
I’m just saying this in order to help. It would be an excellent thing if everyone (and I mean everyone) saw this film and then sat down and thought hard about where to go and what to do.

Even for a pseudo-Factory Girl fanatic like myself, this Stu Van Airsdale crime scene analysis is just too complicated. What can’t he just go with the Charles Taylor party line and be done with it?

What is that rancid cotton-candy Aguilera or Spears-like pop song playing all through the trailer for No Reservations (Warner Bros., 7.27). Turns out it’s a Liz Phair track called “Count On My Love.” Just one listen and I hated it. Screechy and alley-catty with a piercing helium wail. 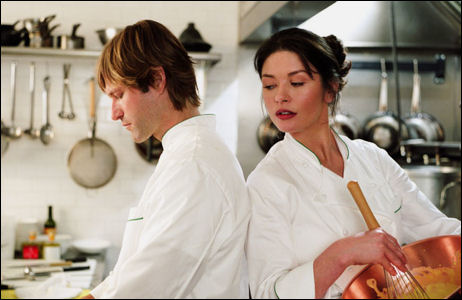 So now I’m asking myself why a film scored by the great Phillip Glass is sending an entirely different musical message than the one in the trailer? Is the clarinet solo music on the No Reservations website a Glass composition? It sends out a very soothing vibe and accomplishes the opposite effect of that godawful Liz Phair tune — it makes me want to see the movie.
Are Warner Bros. marketers trying to scare away the fans of Mostly Martha, the 2002 German film that No Reservations is a remake of, and attract the younger women who didn’t get all the jokes in The Devil Wears Prada? One thing’s for sure: when a movie sends out radically conflicting musical messages in different ad mediums, there’s some kind of conflict going on between the filmmakers and the marketers. 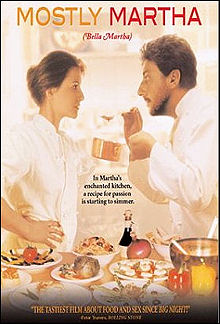 I’m told that some LA screenings of No Reservations have been set up, but no one I know has been invited to any. I don’t know if the film is good or bad or so-so, but Warner Bros. has almost everyone convinced that there’s some kind of problem.
And if this is so, the feeling among the natives (i.e., myself and the people I talk to) is how could this have happened with such great source material to start with? Sandra Nettlebeck‘s Mostly Martha is one of the all-time best adult romances, best foodie movies and best mother-daughter stories all in one. And how could this have happened with the assistance of Scott Hicks, a once-promising director who delivered the very moving Shine not that many years ago?
This may or may not apply to No Reservations, so let’s make it rhetorical: why is it that when Americans remake European films they always feel the need to gloss things up…to make them much broader and dumber and more lower-com- mon-denominator than the original? Are American audiences simply thicker and shallower than European auds? Is the European need for sugar stimulation lower than that of Americans?