Those damn gringos in the Paramount Home Video art department have made an error — culturally insensitive, clueless — on the cover for the Babel two-disc special edition that comes out on 9.25.07. DVD Beaver‘s Eddie Feng pointed this out in a 7.19 e-mail to Paramount Home Video’s Deborah Peters, to wit:

They couldn’t fit Alejandro Gonzalez Inarritu’s full name on the DVD cover art, so they simply shortened it up a bit. Yo…got a problem wit dat? The all-inclusive art on the Babel DVD

“Hey, Deborah — You should talk to someone who puts together artwork for your DVD covers, ” Feng began. The new Babel 2-disc cover states that the movie is directed by ‘Alejandro G. Inarritu.” This is a serious misprint.
“Spanish speakers use two last names; the first one is their father’s last name, and the second is their mother’s last name. If they use only one last name, then it’s just the father’s last name. Thus, Alejandro’s legal short name is Alejandro Gonzalez, not Alejandro Inarritu. Gonzalez is not his middle name, so it shouldn’t be abbreviated to an initial. If you want to use an initial, then the custom would be “Alejandro Gonzalez I.”
“Please look into making this change before Paramount is ridiculed by the millions of Spanish-speaking customers that you have here in the United States and abroad. — Eddie Feng, DVDBeaver.com.”
As Cheech Marin once said to me in an interview about ten years ago, “This city is called Los Angeles” — pronoucing it “Los-angeleeze” — and not “Los Anglos.”
Helmeted state trooper (points to Marin): “Hey, where are you from?”
Marin: “Where am I from?”
Trooper: “Yeah, where are you from?”
Marin (singing): “Born in East L.A. Man I was….born in East El-laahayaay.”

MTV.com has a series of video interview clips with Superbad‘s Jonah Hill and Michael Cera. The guys are quick, but then you knew that.

Steven Spielberg needs to “figure out what to do about Darfur,” Slate‘s Kim Masters wrote earlier today. “That may not seem to make sense at a glance but it does in light of his role as an artistic adviser to the Chinese for the ’08 Olympics. The Chinese have clout in Khartoum, and Spielberg, as fate would have it, has influence in China. Bizarrely, Spielberg may be one of the most powerful people in the world when it comes to pressuring the Chinese to lean on the Sudanese government. 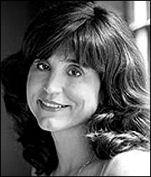 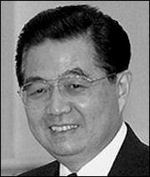 “Yes, George Clooney and Don Cheadle and their associates have done their part to push China to act. But Spielberg is in a unique position to embarrass the Chinese if he were to withdraw from his role. In early April, Spielberg wrote to Chinese President Hu Jintao asking for action. Whether the Chinese have responded at all is still unknown, but sources say Spielberg will shortly have more to say on the subject.”
We all know that Spielberg wouldn’t have said anything to China about its oblique funding of the Darfur genocide if Mia Farrow hadn’t written in a March Wall Street Journal op-ed that he could go down as “the Leni Riefenstahl of the Beijing games.” We also know that President Ju Jintao isn’t going to radically reverse his country’s Darfur policy because of whatever pressure Spielberg might bring to bear in a diplomatic vein.
There is only one thing to do, and that’s for Spielberg to (a) withdraw from participating in the games and (b) explain in the most forceful terms imaginable that no other self-respecting artist or filmmaker should participate unless China uses its influence in the Sudan (it has sizable interests in Sudan’s oil industry) to force the Sudanese to adhere to the May 2007 peace deal signed by Sudanese President Omar Hassan al-Bashir and Chad president Idriss Deby.
Wikipedia Background: Colin Thomas-Jensen, an expert on Chad and Darfur who works for an International Crisis Group think-tank, has grave doubts as to whether “this new deal will lead to any genuine thaw in relations or improvement in the security situation”. And the Chadian rebel Union of Forces for Democracy and Development (UFDD), which has fought a hit-and-run war against Chad President Deby’s forces in east Chad since 2006, stated that the Saudi-backed peace deal would not stop its military campaign.”

“Could Paramount Pictures lose Steven Spielberg and the DreamWorks studio it bought just 20 months ago for $1.53 billion?,” Business Week‘s Ron Grover asked in a 7.19 piece. “It’s entirely possible. People close to Spielberg say he is vexed that Paramount has treated his team shabbily and grabbed credit for DreamWorks productions. If Spielberg were to leave, says a person familiar with the situation, he could take several of his hitmakers and the DreamWorks name with him.” 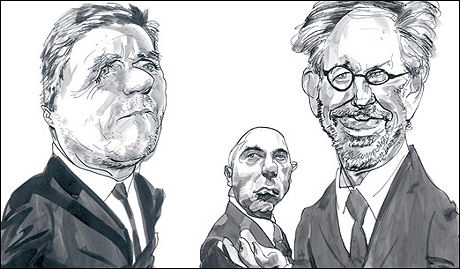 The N.Y. Post‘s “Page Six” team is reporting that the producers of Poor Things, a Lindsay Lohan flick about a couple of women who befriend and then kill homeless guys in order to collect their life insurance (i.e., a kind of avaricious 21st Century Arsenic and Old Lace), has pulled the plug. One stated reason is because “Lohan’s antics in Las Vegas over the weekend have scared the bond companies” — will she go back to boozing and passing out in cars? — and this has resulted in the funding for the film collapsing.
I’m hearing otherwise. A guy involved in Poor Things says fears of Lohan resuming her unstable off-set behavior wasn’t the thing. It was cancelled, he says, because the producers couldn’t raise enough foreign sales dough. However, Lohan’s name was the selling point that failed to generate sufficient interest, so it may have been her fault after all. If this guy is telling the truth, I mean.
A Lohan friend told “Page Six” that the actress “had nothing to do with that movie shutting down. It was a mess to begin with. They randomly fired Channing Tatum for Giovanni Ribisi, and then financing fell through because producers spent money like water. It was only supposed to cost $4 million; Lindsay was being paid nothing for that role.”

In a 7.20 piece about a three-venue retrospective in Manhattan called “The Mistress and the Muse: The Films of Norman Mailer,” N.Y. Times critic A.O. Scott confesses to a lurid fascination for the famous fight scene between Mailer and actor Rip Torn in Maidstone, an experimental film that Mailer directed in the late ’60s and which was given some kind of release in 1970.

The fight scene is one of the finest ever captured on film because it’s the most clumsy and embarassing. The aggression — biting, strangling, wrestling, growling — has a crude, flailing quality. The emotional current between Mailer and Torn is part childish and part animalistic, and altogether bizarre. This is what real fights in the real world look like, and I’m trying to think of any instance in which Hollywood has choreographed a fight scene anything like it.
In Maidstone, says Scott, “Mailer describes what he is doing — whether he’s speaking as himself or as Kingsley is not clear, and perhaps moot — as pursuing ‘an attack on the nature of reality,’ a slogan that could fit much of the art of the time.
“In any case, reality took its revenge, or called Mailer’s bluff, in the person of Rip Torn, an actor in the film who assaulted Mailer with a hammer as D.A. Pennebaker’s camera rolled and the novelist’s children screamed in terror. Real blood was shed — Mailer nearly bit off his assailant’s ear — and schoolyard obscenities were exchanged as if they were ontological brickbats.”
The film “captures something essential in Mailer — his reckless bravado, his willingness to court ridiculousness and the loss of control. Very few artists today, in any medium, exhibit this kind of crazy passion, and that’s too bad.” 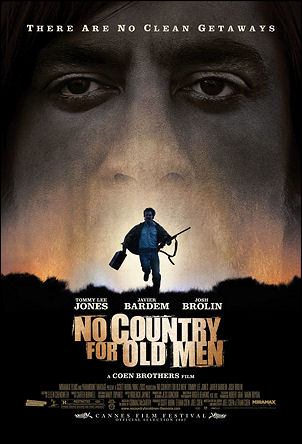 If I were in charge of creating the one-sheet for No Country for Old Men, I would go this way also. Thriller, run for your life, rifle, scary guy, etc. But I would create an alternate poster also — one that links the threat element to the tone of sadness and old-guy regret in the Cormac McCarthy novel, that underlying current of “wow, what’s happening to this country?”
July 20, 2007 12:25 pmby Jeffrey Wells
5 Comments
Relers on critic fracas

“The Chicago Film Critics Association has attracted scads of attention and even more sympathy this week for its boycott of films released by 20th Century Fox,” the Reeler‘s Stu Van Airsdale has written.
“The notoriously press-hating studio pushed back its previews of The Simpsons Movie to all-media screenings a few nights before the July 27 release; this was the last straw for the group led by Chicago Daily Herald critic Dann Gire, who sent word to Fox publicists that he and his colleagues would no longer contribute features or profiles about Fox films.
“Reviews, evidently, are exempt. The Los Angeles Times and Radar Online, among others, laid out the ‘problem’ over the last few days: Fox’s hostility to online media, where coverage and reviews leak at a rate that studio reps feel compromise their control, is no longer acceptable, particularly when that hostility extends to print critics, whose convenient sense of outrage defers only to their enduring sense of entitlement.”

How much of the current 20th Century Fox-vs.-internet critic hoo-hah is about simple communication skills, or a lack thereof? The thorniest relationship problems have a way of disappearing like that when this or that combatant decides to apply a little charm and openness and friendly back-pats. And yet I’ve long noticed a curious reluctance on the part of certain Fox publicists to being responsive and friendly (as opposed to be polite or “correct”) and talking frankly about things — the upper-crusters believe they’re too good to actually talk to writers who don’t work for Newsweek or the N.Y. Times — and returning phone calls.
These tendencies, I’ve found time in the past, are usually rooted in the personality of this or that senior executive. Frosty butch-boss publicists are unfortunately a fact of life in this town. You have to get over them or get around them or placate them or something, but they’re not going to go away. I could name five or six of the worst ones right now, but what would that get me? It’s usually best to just ignore them and do your work, and then six months down the road you’ve forgotten what the fight was about and so have they and it’s back to business as usual.
What’s happed in the Fox situation is that hissy-fitters have poisoned the well by refusing to return calls or be truthful (I was apparently lied to about Chicago Film Critics Assn. boycott being a non-starter) or communicate quickly about this or that, and many journalists have become irate about this and now there’s a “situation.” Needlessly. And yet once these things start, it’s hard putting out the fires.
Right now everyone hates Big Fox (although Fox Searchlight is totally cool …they’re not in this in my book) and online critics all over the country are voicing complaints, writing pieces about these complaints and pledging solidarity with the Chicago Film Critics Assn. boycott on features about Big Fox and Fox Searchlight films. “Twentieth Century Fox is on the edge of an internet publicity crisis,” L.A. Times reporter Gina Piccalo has written.
This will all go away sooner or later. It always does. Besides, who cares about Babylon AD, Starship Dave, Alvin & The Chipmunks, Alien vs Predator 2? These are all instant dumpers in my mind. The only one that looks good is Doug Liman‘s Jumper…maybe.

“Rupert has confirmed to me that we will have Page 3 girls…but in a concession, they will be dot drawings” — a Wall Street Journal staffer indulging in gallows humor under the shadow of Rupert Murdoch‘s looming purchase of the newspaper, as related in a 7.19.07 N.Y. Times story by Richard Perez-Pena. 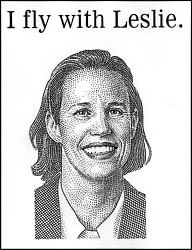 Leslie Hill, a member of the Bancroft family who has opposed selling the Wall Street Journal to Rupert Murdoch, is depicted in a poster hanging in the paper’s offices.
July 20, 2007 12:08 amby Jeffrey Wells