There are a few straight-from-the-shoulder statements, one or two feints and some very careful posturings in John Anderson‘s 8.21 N.Y. Times piece about Todd Haynes‘ I’m Not There. But it’s all in the service of a good cause, which is to modify the thinking of those who are going, “Wow, I’m Not There is opening at the Film Forum? Isn’t that almost the same as opening it at the Nuart? 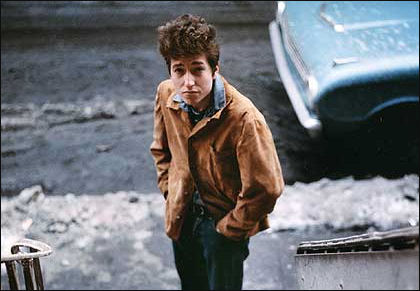 Some highlights: (a) Harvey Weinstein‘s decision to open this mystery-of-Bob Dylan film in only two Manhattan theatres — Film Forum and some other venue — and two in Los Angeles on 11.21 has made the release plan “something of a curiosity,” Anderson notes, since it’s getting “the kind of debut that might be afforded a Mexican documentary.”

(b) “With a movie like this you have to build it,” Harvey tells John. “I don’t think you can go out on 500 screens. The reason for Film Forum is you go where the best word of mouth is on the movie. I like the movie; I think it’s adventurous.” (Positive energy! Safety lines and hiking boots!) The audience is going to have to work– work in a good way.” (We can work it out? No, that’s the Beatles.)

(c) “I have a tendency to start small and go big. If we threw this movie out wide, I don’t know what it would do. I think we have to start somewhere. I’m going to play every major city in the United States with this movie. I’ll play 100 cities, at least.” 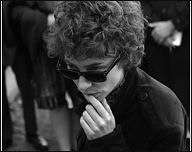 (d) Harvey adds, “I may be jumping the gun, but if Cate Blanchett [one of the six “Dylan’s] doesn’t get nominated, I’ll shoot myself.”

(e) The film, says Anderson, “sometimes looks like A Hard Day’s Night, elsewhere like McCabe and Mrs. Miller” and has been “shot in styles that correspond to each Dylan epoch, imbuing Dylan’s life with mythic American qualities.” Hey, sounds cool.

(f) I’m Not There, Anderson interprets, is “not purely about making money but about an obligation to have important movies distributed. “That’s the story of my life,” says Harvey. “That’s exactly what I believe in. I’m Not There and some of the tougher stuff — it’s not going to be The Nanny Diaries, you know.” (Did I interpret that right?) “But I’ve been very fortunate that what I’ve believed in has worked, and even when it doesn’t work, we make money in other areas to cover that. It is my responsibility and, more importantly, it’s my passion.” 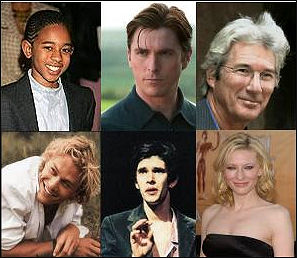 This is the old Harvey talking, and that’s finally a heartening thing. (Patrick Goldstein will be pleased.) After all is said and spun, it’s reason enough to be there for I’m Not There.

The L.A. bookings will be at the Landmark and the Arclight.

“In my twenties, I hung out at a Boston dive bar with another young film critic (let’s call him, oh, Onan Gliberperson) drinking pint after pint of Bass Ale and playing Donkey Kong well into the night.” — from David Edelstein‘s review of of The King of Kong: A Fistful of Quarters in the current New York magazine.

Of all the films described in Entertainment Weekly‘s Fall Preview issue, only one made me go “uh-oh” — Zac Helm‘s Mr. Magorium’s Wonder Emporium (20th Century Fox, 11.16). It’s that look on Dustin Hoffman‘s face, mainly. On top of a guarded feeling I’ve had about Helm since seeing Stranger Than Fiction, which he wrote, last year. Obviously not aimed at guys like myself, but is anyone up for another Charlie and the Chocolate Factory-type deal? Natalie Portman mitigates somewhat. 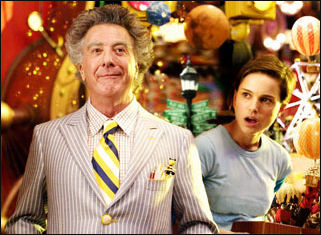 5 Comments
Many Dallaires, many devils

It’s a little unusual that Roger Spottiswoode‘s Shake Hands With the Devil, a drama about Lt. General Romeo Dallaire‘s horrific saga as a commander of UNAMIR, the U.N. peacekeeping force, during the 1994 Rwandan massacre, is using the same title as Peter Raymont‘s exact- same-subject documentary, which played at Sundance ’05 and made its way around festivals and select theatrical bookings later that year.

It’ll also be the second time that Dallaire’s Rwandan experience has been portrayed in a feature — Nick Nolte‘s character in Tony George‘s Hotel Rwanda was based on him. Both the doc and the Spottiswoode film are based on Dallaire’s “Shake Hands With the Devil: The Failure of Humanity in Rwanda,” a book published in 2003.

I missed this Nikki Finke update earlier today: Superbad finished the weekend with $33 million, not $31.2 million or $31.4 million (per Josh Friedman and Len Klady, respectively), for the weekend. An “exceptional hold,” down only about 2% from Saturday, etc.

Superbad is now a strong candidate to earn $100 million. It’s a safe bet to earn a little north of $10 million between today and Thursday, and with all the so-so movies debuting next weekend it could do another $22 to $23 million (perhaps a bit higher), which would give it a cume as high as $67 or $68 million by next Sunday night.

“And in the dream I knew that he was goin’ on ahead and that he was fixin’ to make a fire somewhere out there in all that dark and all that cold, and I knew that whenever I got there he’d be there. And then I woke up.” An older man’s description of a dream about his deceased father, spoken at the end of a very good film (one I’m not going to name) that has stayed with me for weeks and weeks, and which sinks in deeper every time I think of it.

“If Alfred Hitchcock‘s tombstone bore the word ‘suspense,’ what would we engrave on Michelangelo Antonioni‘s? ‘Alienation,’ probably, yet that is a word forever applied to the films, not spoken within them. You may disagree with his vision of the sexes fighting to make connections that endure, as opposed to mere spasms of desire (‘avventura’ means not just an adventure but a fling), but there is no denying the sharp, concrete form in which that vision was set. 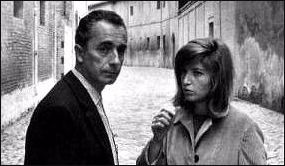 “And so the paradoxes accrue: sex solves nothing for Antonioni, yet somehow his films, blending tactility with froideur, remain a tease and a turn-on, and, for someone insistent on human solitude, he was awfully skilled at handling group situations — look at the beach party in The Girlfriends, or the search party climbing rocks in L’Avventura. He was an urbanist, yet few can match his eye for landscape or his nose for weather.” — from Anthony Lane‘s essay, “Lone Sailors,” in the 8.27 New Yorker.

Of the forthcoming 8.24 openers, Philip G. Atwell‘s War (Lionsgate), the Jet Li-Jason Statham martial-arts thriller, and Robert Pulcini and Shari Springer Berman‘s The Nanny Diaries (Weinstein Co.) are tracking the best. War has better awareness and definite interest, and will probably be the #1 newbie. And the 9.7 duke-out between 3:10 to Yuma and Shoot ‘Em Up is still neck and neck, with the latter enjoying a very slight edge.

The new bells-and-whistles website for Paul Haggis‘s In The Valley of Elah (Warner Independent, 9.14) went up today, along with a new one-sheet. The copy line says, “Sometimes finding the truth is easier than facing it.” 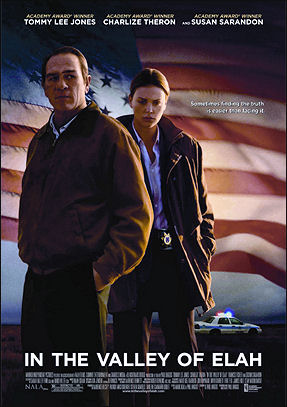 The 30th anniversary of the death of Elvis Presley came and went last Thursday without much stir on this end. And for good reason — the metaphor of his film career is more than a little painful to contemplate. For a guy who began making movies with the dream of emulating the pathos of James Dean, Presley’s celluloid history is probably the saddest in motion picture history. 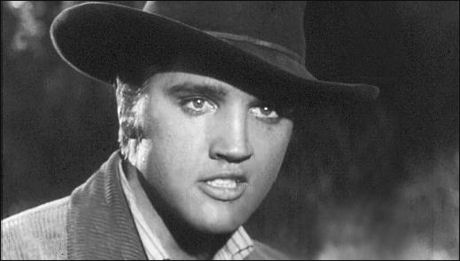 He made 27 stinkers in a row after Don Siegel‘s Flaming Star, his last reasonably decent programmer. I was going to say something about the three or four that are half-palatable — Robert D. Webb‘s Love Me Tender, Richard Thorpe’s Jailhouse Rock, Michael Curtiz‘s King Creole and Flaming Star. But even these are mixed- bag affairs.

27 depressingly slick and shallow films in a row is just staggering — a metaphor for the most appalling commercial sell-out in history.

In Matt Zoller Seitz‘s N.Y. Times review of The King of Kong: A Fistful of Quarters (which I still haven’t seen), he reports that “New Line has commissioned ]director Seth] Gordon to remake this story with actors.” And Gordon has told MTV.com that he’d like to see Johnny Depp play the doc’s real- life bad guy Billy Mitchell.

This brings to mind an observation by Variety‘s Ronnie Scheib that “Hollywood may find it difficult to cast two big-name stars willing to play it as broadly as the real-life hero and villain of this tale. Nor would many self-respecting scriptwriters dare to match the sheer improbability of these actual happenings.”

The doc, in any event, has tallied exceptional Rotten Tomatoes and Metacritic ratings — 97% and 85%, respectively. On top of those stirring per-screen averages last weekend.

Two days ago AICN’s Drew McWeeny/Moriarty posted a reader pan of Jonathan Hensleigh‘s Welcome to the Jungle, a Blair Witch-y kids-vs-cannibals shocker that I saw and favorably reviewed last November. As kids-in-peril movies go, it struck me as an unusually spooky, unnerving, cut-above thing — an experience that “creeped me out in a way I’m not likely to forget.”

I therefore don’t get why it’s going straight to video — Movies Unlimited and Amazon are posting an 11.13.07 release.

I was particularly aroused by “the raw non-staginess of it, the realistic atmosphere, the non-actorish acting, the hand-held photography, and the seemingly authentic [Fiji/New Guinea] locales. You can taste the moisture and the earthy-leafy jungleness all through it, but especially in the second half. Which jacks up the fear factor once the uh-oh stuff happens.”