“To me, naturalism is the death of drama. Lee Strasberg came along and the Method fucked everything up. I find people like Celia Johnson are my favorite actors. I was brought up on films like Brief Encounter, and for me they expressed enormous truth. Marlon Brando does not have the monopoly on truth!” — Atonement director Joe Wright, as quoted in the trivia/bio section of his IMDB page.

“The revelation that Owen Wilson may be afflicted with a physiological vulnerability to the downward pull — to the sort of self- annihilating impulse best described in William Styron‘s Darkness Visible — simultaneously fascinates us and causes us to avert our gaze,” writes Daphne Merkin in Sunday’s [9.16] N.Y. Times.

“However you parse Wilson’s desperate act, it is clear that in an instant-fix, cure-all culture — one in which we habitually reduce fraught real-life dramas into smart-alecky quips on late-night talk shows — we want instant-fix, cure-all answers. Addiction and recovery sagas are by now more boring than heartrending, but they go down smoothly and are media-pleasing.

“[And yet] the romance of melancholy — a style of self-presentation marked by an appealing air of ennui — has been with us since Hamlet. It is perhaps best expressed in the opening of Chekhov‘s The Seagull, when Masha, asked why she always wears black, replies, ‘I am in mourning for my life.’ But a poetic conception that tethers creativity to a despondent temperament is also misleading, discounting as it does how unproductively crippling the malady can be.

“Depression — the real hard stuff — is not chic, and it doesn’t sell tickets. It is a clinical illness urgently requiring treatment, usually hit-or-miss medication that tinkers with serotonin or dopamine levels. I am referring to the sort of condition that subverts lives, making it difficult to talk to people and impossible to leave the house. At its worst, it can spiral into the sort of suicidal ideation that requires hospitalization, or into suicide.”

A spanking new DVD of Phil Kaufman‘s The Great Northfield Minnesota Raid (’72) — a not-great but well-worth-watching western about the biggest fiasco to befall the James-Younger gang — will be for sale on 9.25. It’s a vibrant example of Kaufman when he was really and truly Kaufman (i.e., pre-Right Stuff, pre-Henry and June, pre-Quills, etc.). A great cast — Cliff Robertson (Cole Younger), Robert Duvall (Jesse James), Luke Askew, R.G. Armstrong, Dana Elcar, Donald Moffat — and only 91 minutes long. 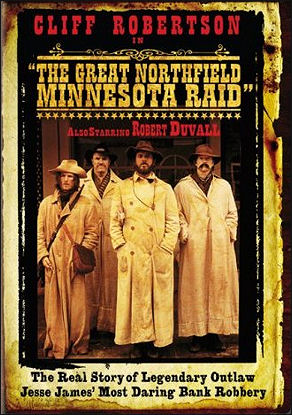 The Times Online‘s Kate Muir informs that Michael Clayton costar Tilda Swinton, while playing an American executive so gripped by vice-like ambition and desperation that she hires a killing to save her career, “was attracted to the miserable, lonely underwear scene.

“Alone in her hotel room, Swinton’s character, Karen Crowder, sits before the dressing-table mirror rehearsing a corporate speech. She’s in her bra, and a middle-aged droop of flesh sags beneath the strap on her back.

“‘That image struck me very early on when I was reading the script,’ Swinton recalls fondly. ‘It was one of the things that made me want to do the film — it made her seem vulnerable. She needed to have a certain kind of body, which I built with the help of rather a lot of pie.'”

I’ve never been so relieved that I don’t like pie as I am right now. Quentin Tarantino has written about eating pie in his scripts (Natural Born Killers, True Romance), and you can see today that pie (among other things) has had its way with him. Has anyone noticed how the so-called Key Lime pie that Woody Harrelson orders in NBK isn’t Key Lime pie at all, but a kind of bullshit Dunkin’ Donuts lime-jello thing?

According to the Toronto Globe and Mail‘s Gayle McDonald, a “perfectly coiffed” female TV reporter got up at the Michael Clayton press conference to “ask” a long, meandering non-question of George Clooney. It was a hormonal swoon put to words, and she finished it off by actually describing Clooney as a “cunning linguist.”

In today’s (9.15) Toronto Globe and Mail, columnist Margaret Wente asks the brilliant Camille Paglia about Sen. Hilary Clinton, and what comes out is so dead-on it’s close to breathtaking. Others have said the same or similar things, but none, I feel, have put them quite so well. The thrust (as contained in the headline) is that “Hilary can’t win, and shouldn’t.” There’s no free access so I’ll just transcribe: 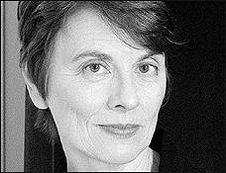 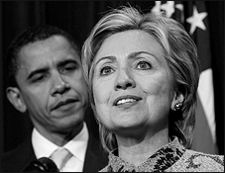 “Hilary is having trouble with educated women of her generation. We seem to be the hardest sell for her right now because we’ve observed her, admired her, embraced her — and then become disillusioned. There’s a sense that she doesn’t possess core values. One feels that she’s uncentered in some odd way. And the chaos of her domestic life is not reassuring.

“[She’s] an over-clever, over-conceptualized political person who has trouble being an ordinary person.

“For someone with so much international exposure, she’s not great on the stage. She’s well prepared with her sound bites, but when she has to play outside of her sphere of preparation, she seems taken by surprise. When someone asked her, ‘Do you think homosexuality is immoral?’ she just shunted it off. She said, ‘I’ll leave that for others to decide.’ She’s essentially a policy wonk. She has no vision.

“She was able to succeed as a carpetbagger in New York because she’s the very image of the corporate-legal meritocracy in Manhattan. I cannot stand the elitism and snobbery of this lawyer-heavy super-class. Hilary and her friends are symptomatic of that class. She can glide through those corridors very well, but one feels she has no real pleasures. There’s something about Hilary that’s anhedonic** — the inability to take pleasure in the moment.

“Everything in her is this beady-eyed scheming for the future, combined with this mass of resentments for the past, [towards] the people who have done she and her husband wrong.

“She has a powerful machine. But many, many other candidates will be draining off support. The Democrats around me all have their fingers crossed that [Barack] Obama can develop complexity and stature on the road. This is our hope right now. We want to turn the page. We don’t want to go backward into the Clinton years, which is what will happen if she’s nominated.”

David Cronenberg‘s Eastern Promises was announced as the winner today of the People’s Choice Award at the 2007 Toronto International Film Festival. In other words, the locals voted for a local. Guy Maddin won the Best Canadian feature for My Winnipeg . The Indiewire guys are running a complete list of winners.

DVD Savant (a.k.a. Glenn Erickson) is saying that the Deliverance deluxe DVD that comes out on Tuesday, 9.18, “replaces a much older release with an improved enhanced transfer that flatters the camerawork of Vilmos Zsigmond.” [9.16 shocker: Erickson’s assessment is now suspect. See fire-alarm update at end of this article.] 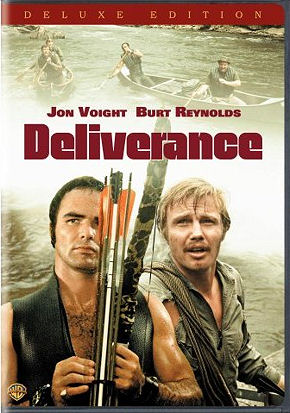 “I remember the stunning 70mm six-track audio during the film’s exclusive run at the Cinerama Dome, and the disc’s 5.1 audio recreates the same dynamics.

“John Boorman and all four leading actors add their anecdotes and opinions to Laurent Bouzereau‘s multi-part 35th Anniversary retrospective docu,” Erickson adds, “which covers every aspect of the film including the story behind that amazing dueling banjos scene. Boorman also provides his thoughts on a full commentary.”

Nothing gets me interested in a new DVD version of an older film like the words “improved enhanced transfer,” even knowing that the real way to see much-better looking versions of old films is to watch them via Blu Ray or HD-DVD. But I don’t own a Blu Ray or HD DVD player, much less a high-definition flat-panel TV of any size (an investment that would set me back a good two grand or so…no?), so I’m really kind of a Luddite.

Fire-alarm update: Either Erickson deliberately softballed, or he’s color-blind, or he was blind drunk when he wrote that the new Deliverance DVD represents “an improved enhanced transfer.” The proof can be found on this DVD Beaver page in which Gary Tooze compares frame-capture stills between the new Deliverance DVD and the ’01 version.

Just click on the link and compare. The apparent degradation by way of the less-sharply-focused, coffee-and-muddy-water images on the new DVD aren’t just obvious — they’re glaring. Warner Bros. Home Video technicians have some answering to do

Tooze says he’s “somewhat disappointed by the new Deluxe SD transfer…what looks odd to me are the colors and detail. It can look very green at times but skin tones are less red than in the original.”

The key visual element in the original release prints was a detailed but desaturated (almost flirting with monochrome) color. I would say the new DVD (based on the DVD Beaver captures) looks murkier and browner. The stills seem to also prove that the older version had much sharper detail — the dirt smudges on poor Ned Beatty‘s back in one of the shots were obviously rendered with more detail in the ’01 DVD.

“Mid ’70s punk music was basically about two words — ‘fuck you.’ But sooner or later you knew a band was going to come along and say something different, and that was Joy Division. Punk said ‘fuck you’ — Joy Division said ‘we’re fucked.'” — a comment heard near the halfway point of Grant Gee‘s Joy Division, which the Weinstein Co. acquired for distribution last Thursday.

It seems facile to say, as two HE readers have, that big-name female actresses should think about steering clear of Joel Silver projects following this weekend’s shortfall performance of The Brave One.

Jodie Foster‘s vigilante film, nicely directed by Neil Jordan, is an emotionally developed, decently written effort. This in itself place it heads and shoulders above Silver stinkers like Gothika (in which Halle Berry starred and suffered), The Reaping (Hilary Swank vs. Biblical plagues) and The Invasion (which failure of which underlined Nicole Kidman‘s lack of commercial potency).

Still, if you were an agent repping a major female actress and she was offered the lead in a Silver film, wouldn’t you give it a bit more thought now than you would have six months or a year ago?

Now I’m hearing that The Brave One won’t even make $15 million this weekend, which was a shortfall in itself. A competing studio’s projection says it’s only going to do $13,761,000….way short of that $20 million ballpark indicated by last week’s tracking. What slowed it down? Some of the reviews were fairly rough, but aren’t reviews supposed to be meaningless these days? Perhaps not with slightly older women, the Brave One‘s targeted demo. I’m guessing (not having canvassed or called around) that the young-male action crowd wasn’t that into it.

Here’s an IGN link to a quickie teaser for Francis Coppola‘s Youth Without Youth (Sony Classics, 12.14). Tim Roth, a 2.35 to 1 aspect ratio, a hot lady in black underwear, and Bruno Ganz‘s voice saying “we’re running out of time.” The teaser is preceded by a flashy, aurally abrasive spot for Volkswagen. 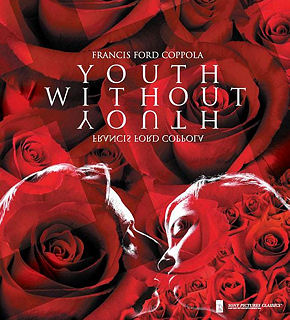