Support on Patreon Follow @wellshwood
29 Comments
“Leatherheads” is being bumped

George Clooney‘s Leatherheads, a romantic comedy set in the world of 1920s football, had been set to open on 12.7, but Universal is pushing it back to the spring. April, actually. The Universal guy who told me about this says that extra shooting is currently being planned. He’s also been told “there’ll be new actors hired as well.” Remember, now — it’s not real unless you read it in Variety! No word on why it’s been bumped, but with “new actors” being hired it ‘s not hard to put two and two together. 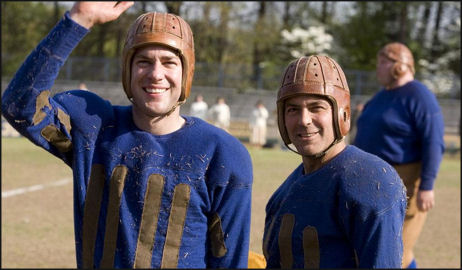 I could run a list of ten things I like or at least admire about The Darjeeling Limited (which I may do tomorrow — could a slightly positive backlash be manifesting?), but there’s nothing but good vibrations on the soundtrack, and I almost never mention CDs in this column in any context. (Unless it’s a new Springsteen album.) 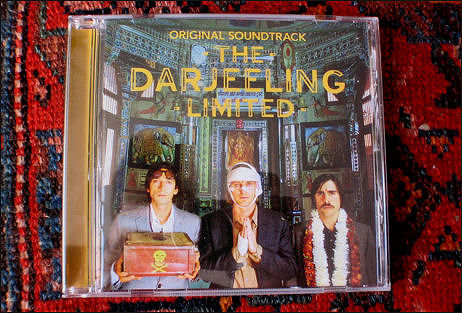 The Best Picture, Best Actor and Best Actress prediction calls of the Gurus 2.0 are, for the most part, just as timid and safe and soft-bellied as the choices made the first-string Gurus. Okay, so In The Valley of Elah ranks a little higher and Zodiac got three Best Picture votes instead of one…big deal.

I know — it’s unfair to refer to Gurus 2.0 as second-stringers when what they are, basically, are “the other guys.” Is there another way to put it, something less dismissive? Thirteen smart critics and bloggers who’ve been labelled as…what, first-stringers who came second? There doesn’t seem any way around terms like “second choices,” “the farm team,” “the Bad News Bears” The term 2.0 implies advancement, but that’s a gloss, a con. Poland describes them as “serious” pundits who are “not quite as, uh, overexposed.”

Look for my “pure” Oscar nominee rundown box — I’m calling it IF THERE WAS A GOD… — sometime tomorrow, or at the latest by Friday. Nominees decided upon with no regard whatsoever for what the Academy might decide down the road.

Every once in a blue moon, David Poland gets it right about an end-of-the-year awards contender. American Gangster (which I went for big-time a week ot so ago) is one of those rare lucky recipients. Not quite “the undeniable classic [he] felt throughout was trying to emerge,” Poland says, and yet “a classic tale of the American dream on drugs…one of the very best gangster epics of all time…the work of a truly skilled filmmaker, some excellent actors, a great story, and a ’70s spirit of filmmaking that is a pleasure to see on the big screen in 2007.”

Ignore the observation about how Russell Crowe‘s detective character going through a custody suit interferes with the flow and the rich ingredients. The movie is constantly showing parallels between Crowe’s Richie Roberts and Denzel Washington‘s Frank Lucas — their private backwater moments as well as their professional dedications and drives. I felt that coming to understand that they’re not all that different and even kind of similar was the main point of Steve Zallian‘s script, which means that comparing this and that aspect of their family situations naturally follows.

Notice also how Poland subconsciously shows his animus for In The Valley of Elah by ignoring Josh Brolin‘s performance in that film while calling him “the comeback player of the year” who also scored big in No Country For Old Men? Three right-on performances in a trio of first-rate films released in the space of four months — talk about good career karma. (Let’s not muck things up by mentioning Brolin’s apperance in Planet Terror.)

With Halloween starting to approach, a reader asked an hour ago about my running a list of favorite horror films. Instant stopper. The term “horror film” has, of course, become a euphemism for slash-chop-gore, and most people need to be in a state of acute hormonal tumescence to be a fan of this. My idea of a cool high-end-end horror film is Juan Antonio Bayona‘s The Orphanage — a movie that mainlines fear into your spinal cord. (Especially that hide-and-advance scene when the kids make their appearance.) 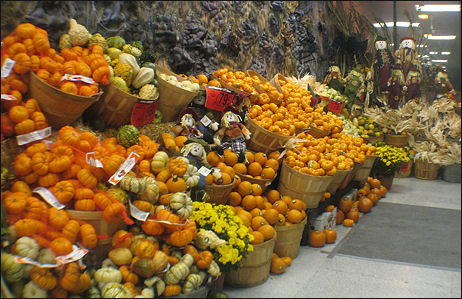 Pumpkin display at the West Hollywood Pavillions on Santa Monica and Robertson Blvds.

Most of today’s horror-film fans, providers of testimony to our social and aesthetic devolution, will probably consider The Orphanage too restrained for their tastes. Their loss, cinema’s lament. The scariest things are the hints and omens and realizations that drop into your brain like water and spread like dye. They don’t seem like very much at first, but they sound a chord that quietly vibrates and then seeps right into the marrow.

Great horror moments, therefore, are worth savoring. For me, the word “horror” doesn’t seem to apply as much as “deep creep-out.” Four classics in my book…

(1) That four-second-long insert shot in Rosemary’s Baby of a diary or notepad written by a former tenant at the “Branford” — a very old woman — who’s recently passed away. As Mia Farrow looks down and reads we are shown an incomplete sentence — “I can no longer tolerate…” And right away the hook goes in. You know without being told that the thing she could no longer tolerate is probably the thing that snuffed out her life.

(2) That two-second moment when skeleton teeth and eyes are super-imposed upon Tony Perkins‘ face in the second to lastl shot in Psycho (the final shot being the one of the car being pulled out of the swamp).

(3) That entire prelude at the beginning of The Exorcist, and particularly(a) the face of that woman riding in the speeding horse-drawn carriage that almost runs down Max Von Sydow, and (b) those two dogs savagely growling and snapping at each other near the archeological dig.

(4) That moment in The Birds when the drunk at the bar says, “It’s the end of the world!” If Rod Taylor or Jessica Tandy or Tippi Hedren or even Veronica Cartwright had suggested such a thing, the audience would laugh (or perhaps even be offended by such twaddle). But because a pathetic drunk blurts it out, it sinks in.

I spilled the beans about Kris Tapley‘s Oscar-season Variety blog last Sunday, but Variety editors needed two days of contract-affirming, conference-calling and lotus-position meditation before officially confirming it last night. The blog will be called Red Carpet District. The story says Tapley will continue to tap out In Contention stuff also….really? With a lot less fervor and regularity, I would think.

Click on this Dylan online promo (i.e., intended to persuade you to buy the Dylan Collector’s Edition CD that came out yesterday) — it lets you type your own thoughts onto the flash cards. I just did it myself — the Hollywood Elsewhere philosophy of hourly composition and soul-baring. 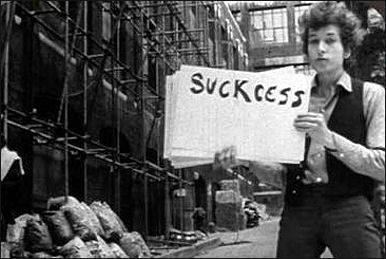 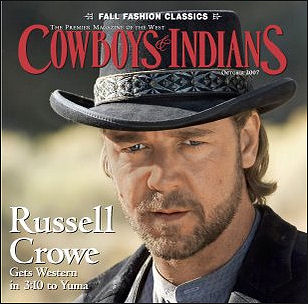 Rich 60-ish men huffing and puffing about power and territoriality is boring, but Paramount has given the DreamWorks trio an olive branch — a DreamWorks-Paramount label called DW/Par, which doesn’t sound as good as Dreamamount — in order to keep Steven Spielberg, David Geffen and Jeffrey Katzenberg from abandoning their Paramount deal over resentment that they haven’t been given sufficient credit for generating a string of B.O. successes this year, blah, blah. The new label is is a symbol of Paramount’s resolve to correct that oversight.

4 Comments
Slow on the pickup

Jim Sheridan told me that Natalie Portman is playing the wife in Brothers, his remake of Susanne Bier’s Danish-language ’04 film, when I ran into him last Saturday at a CVS pharmacy in West Hollywood, and I ran the news the following day (Sun.). But it became a repeatable, quotable story only when Variety‘s Tatiana Siegel posts her story about same at 8 pm last night. Uh-huh.