Charlie Wilson’s War (Universal, 12.25) is a very good-but-not-great political dramedy with a very solid and settled Tom Hanks, an agreeably arch and brittle Julia Roberts (in the finest sense of that term) and a brilliant Phillip Seymour Hoffman…give this man a Best Supporting Actor Oscar nomination and no jacking around…thank you! 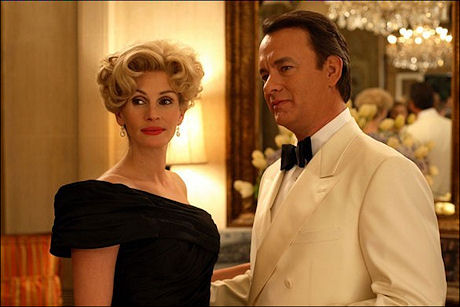 It’s not a monumental achievement but that’s okay…it really is. It’s a film aimed at the over-40 set and that’s cool also. All right, yes…it feels a little too pat and tidy and perhaps a wee bit smug, but that’s fine also. There is room for this kind of thing in our moviegoing culture. Charlie-o is not a Best Picture contender but then we knew that last week when Time‘s Richard Corliss called it — the unkindest cut! — “likable.”

I liked Charlie Wilson’s War. Everyone did at tonight’s Arclight screening. If you can kick back, chill down and enjoy what’s awfully well-crafted and efficient about this film (which isn’t hard), you’ll be fine too.

Is it a great socio-political comedy in the realm of Rules of the Game? Nope, but director Mike Nichols stopped trying to be Jean Renoir or anyone on that level decades ago so what are we talking about? Nichols doesn’t open his veins and die for our sins here. CWW is not about great risk or passion. Nichols is not coming from a hungry, agitated, do-or-die place. But there is edge and attitude in this film — certainly irony upon irony. And it does stay with you. 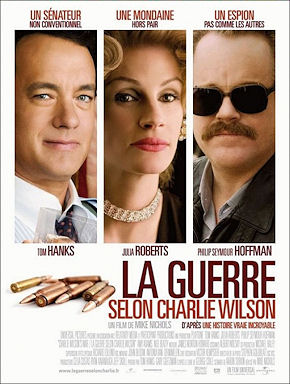 This is a film that says “no good deed goes unpunished in the Middle East, especially with that tendency of the ball to keep bouncing.” It also says “let’s hear it for corrupt, seen-it-all jowly guys who like booze on the rocks– they can turn around and do some good from time to time. Or at least, they did once. Or one guy did anyway.” It also says, “Phillip Seymour Hoffman is a God among men.”

Trust me when I say there were no neg-head vibes in the Arclight lobby when everyone filed out of this evening’s screening. Charlie Wilson’s War is a very smart, agreeable, complex-but-digestible, sure-to-be-popular adult political drama supplanted with babes, boobs and a belly dancer. It’s a Washingtonian Middle Eastern “sand” movie that might actually find an audience by way of Tom Hanks‘ charm, an abundance of talent all around and a sense of bottom-line discipline to the thing. Maybe.

Charlie Wilson’s War has four excellent things going for it: (a) Aaron Sorkin‘s deftly phrased and densely plotted script, which results in (b) a highly intriguing first act and a crackerjack second act that constantly amuses, intrigues and leaves you hungry for more, which in turn results in (c) a sense of being treated to a very economical tale that runs only 97 minutes and, finally, (d) Hoffman’s Oscar-calibre performance as a coarse and cynical CIA operative who can’t not be blunt and corrosive, even when it comes to propositioning a Texas millionairess (i.e., Roberts) over drinks. 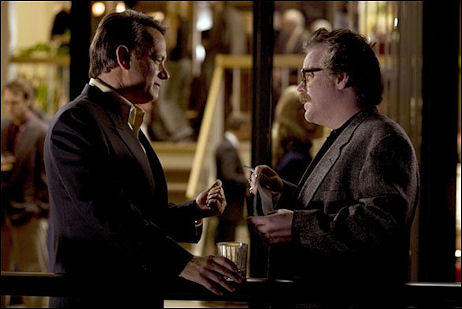 These four things (and they are, in a sense, separate, although they obviously support each other) make Charlie Wilson’s War more than worth seeing, and certainly Oscar-worthy as far as Sorkin’s script (the category would be Best Adapted Screenplay) and Hoffman’s performance as Gust Avrakotos, which has to be a lock for Best Supporting Actor nom. Well, it is that — I was being cautious there for a second, but screw it. Hoffman is beautiful, he can do no wrong and he never will do wrong.

I’ll say more tomorrow. I can’t write any more because it’s 11:43 pm and I have to get up very early in order to get to the IFP Spirit Awards nomination breakfast, which starts at 8 ayem…good God! Rewrites and refinements to come in the late morning. 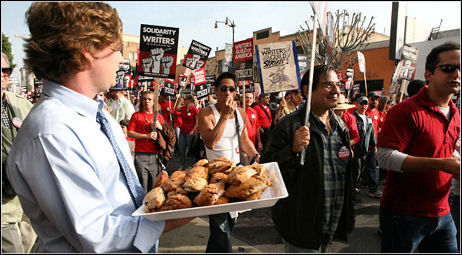 If you ask me, an action flick about Jesus Christ having an evil twin brother is the sort of thing that only Alejandro Jodorowsky could have done justice to, and only if he’d made such a film in his late ’60s-early ’70s heyday. The fact that Reuters reporter Tony Tharakan filed a story about director Robert Sigl and producer Mario Stefan announcing an interest in tyring to make such a film (it’s to be called The 13th Disciple) is one thing, but why Reuters ran it is another.

Charlie Wilson’s War will have its first elite media look-see screening tonight in Los Angeles. Universal reps are “pretty confident” about it so “nobody’s expecting an embargo.” I don’t see what the big deal is about being the first to respond, although there’s always one or two eager beavers who drive right home and put something up by 11 pm or 12 midnight.

And The Winner Is columnist Scott Feinberg (no relation to Harvey Fierstein) has posted a fairly strong shoot-down of David Poland‘s report that the Weinstein Co. will be promoting Cate Blanchett I’m Not There performance for Best Actress…not! “I can now confirm that Blanchett’s performance will remain under awards consideration for Best Supporting Actress, not Best Actress,” he reported at 6:46 pm east coast time.

“A senior official at The Weinstein Company has made this unmistakably clear,” Feinberg writes. Blanchett “is still supporting as she always has been.”

I haven’t made any calls this afternoon to Weinstein Co., but my guess is that the Weinsteiners floated the Best Actress notion as a trial balloon. They fed it to Poland to see what the chattering class would say, and when the consensus came back that that at least a portion of Academy dullards have been uncharmed and unmoved by I’m Not There and (as I put it this morning) that “a bird in hand is worth two in the bush,” they realized that while the Best Actress field is certainly on the weak side, it’s better to stick with Best Supporting and be next-to-assured that Blanchett will win with this and that critics group and at least be nominated by the Academy.

Brian Stelter has profiled Deadline Hollywood Daily‘s Nikki Finke in an 11.26 N.Y. Times piece because of the huge daily numbers she’s been getting due to her bang-bang Maxwell’s Silver Hammer Writers Strike coverage. Since the strike began Finke “has published 142 posts about it, [has] worked almost around the clock for three weeks, and fallen asleep at the computer four times. She estimated she had received 2,000 e-mail messages a day.”

Finke’s heart is obviously pro-WGA but so what? Good accurate reporting is essential but not enough. If you don’t lay something personal on the line, you’re not earning your page views.

“Finke has repeatedly assailed coverage by other outlets, particularly Variety, for, she maintains, running articles slanted toward the studios’ interests,” Stelter writes.

“‘They have been reporting stories that are fantastical,’ Finke said in an interview. ‘What they are doing is kind of old-fashioned fear mongering.” Stelter writes that “dozens of readers responded to her post, saying they were canceling their Variety subscriptions.

Variety editor Tim Gray said his colleagues are used to criticism. “There is constant noise from bloggers,” he acknowledged, “but we just tend to our business and check our facts.”

“Finke’s criticism of Variety has opened her to accusations that she is siding with the writers. She strongly disagrees, and said she has repeatedly reached out to the studios to include their points of view. As a columnist, Finke expressed opposition to a strike, writing on 10.16 that posting on a labor action is something ‘I wouldn’t wish on my worst enemy.’

When the strike is over (and if that thing I was told about Pearl Harbor day is half-accurate, it won’t be very long), Finke is probably going to experience a huge emotional comedown. Something along the lines of the feeling that Kirk Douglas explains to Lana Turner in The Bad and the Beautiful: “When I finish a picture, Georgia, a feeling of emptiness comes over me. It’s bad…its gets worse every time. All I know is, I have to be alone.”

New Line’s “For Your Consideration” site is trumpeting three ’07 releases — The Golden Compass, Hairspray and The Last Mimzy. In a normal year the obvious third-ranked contender would be Gavin Hood‘s Rendition, which hasn’t much of a shot at anything but has some decent performances to its credit. Peter Sarsgaard and Meryl Streep are stand-outs, and Esquire recently hailed Jake Gyllenhall‘s lead perf as a conflicted CIA guy. But it’s all been tossed aside so that a vanity project can enjoy a nominal day in the sun. 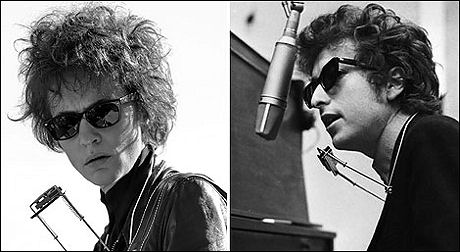