A must-view site called Iraq War Coalition Fatalities offers a rapid-fire pinpoint visualization of all the coalition combat deaths in Iraq since March 2003. Using figures from icasualties.org, it was thrown together by a guy named Tim (tim@obleek.com) who doesn’t give his last name. The animation runs at ten frames a second — one frame per day — with a single black dot indicating the geographical location of each death. Each dot starts as a white flash and then a larger red flash, which then turns to black for 30 days before fading into gray. It’s apparently working from a tally of 3882 coalition deaths (the vast majority being U.S. soldiers), although the chart stops in early October 2007. 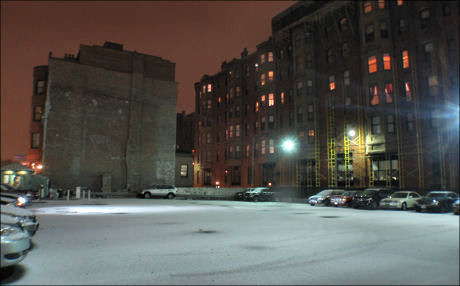 There’s nothing like a football field-sized patch of emptiness within a snow-covered parking lot in the middle of a big cold city to refresh your general attitude — Sunday, 12.2.07, 8:25 pm. 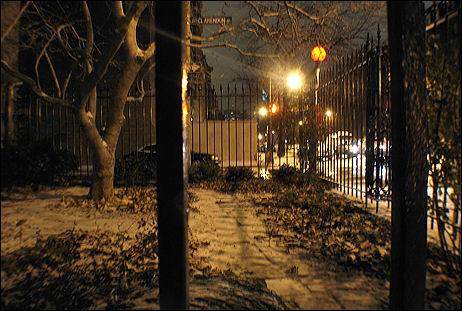 SW corner of Clarendon and Beacon, right in front of the pad. 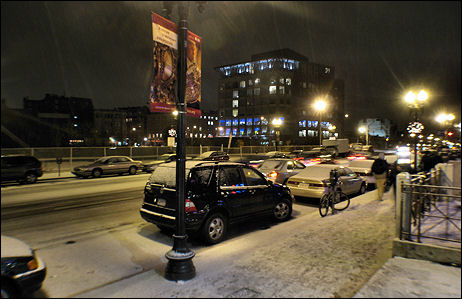 In his 12.2 op-ed piece called “Who’s Afraid of Barack Obama?,” N.Y. Times columnist Frank Rich suggests that “the standard narrative of Campaign 2008” is being turned “on its head” by Obama’s surge in recent weeks, and from that hypothesizes that if Obama “were to best [Hillary] Clinton for the Democratic nomination, he may prove harder for the Republicans to rally against and defeat than the all-powerful, battle-tested Clinton machine.

“The unspoken truth is that the Clinton machine is not being battle-tested at all by the Democratic primary process. When Mrs. Clinton accused John Edwards of ‘throwing mud’ and ‘personally’ attacking her in a sharp policy exchange in one debate, the press didnÃ¢â‚¬â„¢t challenge the absurd hyperbole of her claim.

“In reality, neither Mr. Edwards nor any other Democratic competitor will ever hit her with the real, personal mud being stockpiled by the right. But if sheÃ¢â‚¬â„¢s getting a bye now, she will not from the Republican standard-bearer, whoever he may be. Clinton-bashing is the last shared article of faith (and last area of indisputable G.O.P. competence) that could yet unite the fractured and dispirited conservative electorate.

“The Republicans know this and are so psychologically invested in refighting the Clinton wars that theyÃ¢â‚¬â„¢re giddy. Karl RoveÃ¢â‚¬â„¢s first column for Newsweek last week, ‘How to Beat Hillary (Next) November,’ proceeded from the premise that her nomination was a done deal. In the G.O.P. debates through last Thursday, the candidates mentioned the Clintons some 65 times. Barack ObamaÃ¢â‚¬â„¢s name has not been said once.

“But much like the Clinton campaign itself, the Republicans have fallen into a trap by continuing to cling to the Hillary-is-inevitable trope. They have not allowed themselves to think the unthinkable — that they might need a Plan B to go up against a candidate who is not she. ItÃ¢â‚¬â„¢s far from clear that they would remotely know how to construct a Plan B to counter Mr. Obama.”

People can’t get a fix on the ’07 Best Picture race because they can’t reconcile the two camps — i.e., those who want to nominate reassuring, light-quaalude- high, comfort-blanket movies and those pushing the high-end, full-throttle, not-as- comforting art films (which actually are comforters if you accept the notion that great or intensely stimulating art is the most profoundly serene drug of all).

The blistering tough-nut contenders are No Country for Old Men, Sweeney Todd, Zodiac, Before The Devil Knows You’re Dead, There Will Be Blood, I’m Not There, Control and (if you want to be generous and and/or respectful of a very touching and well-made fathers-and-sons drama) In The Valley of Elah.

The comfort-blanket contenders are Atonement, Juno, The Kite Runner, Charlie Wilson’s War, The Great Debaters and, in a certain way, Michael Clayton. (I’m starting to believe that Tony Gilroy‘s film may become a Best Picture nominee for its smoothly applied craft. As much as I admired and enjoyed it, Clayton is basically an upscale John Grisham film with a redemption theme and a little Howard Beale thrown in. It’s very well made and yet familiar — it’s a first-rate Sydney Pollack film from the early ’90s — and therefore a comforter.)

There are some out there who are actually talking about Enchanted being a possible Best Picture contender. No comment necessary.

By my standards, the only two films that straddle the two categories are American Gangster — a sprawling, satisfying ’70s crime film — and The Diving Bell and the Butterfly, a movie not just about solitary confinement but enslavement by a debilitating affliction, and yet so beautifully made that it has persuaded thousands not to mind being confined inside the body of a man who can do nothing but blink his left eye. (I knew I was seeing something exceptional, and at the same instant that I didn’t want to watch it for two hours because of the climate of terrible confinement.)

Knowing the Academy as I do, it’ll probably work out to three comforters vs. two tough-nut, high-art entries. Or it could break down to a four-to-one ratio favoring the softies. Like the Envelope Buzzmeter chart is predicting right now, for instance — Atonement, American Gangster, No Country for Old Men, Juno and The Kite Runner. It would be a perversion of Movie God justice for this to happen, but a hard-bitten realist needs to prepare for the inevitable downers-around-the-corner.

If Once had any Best Picture heat it would be called a soother also, but it’s the kind of comfort-blanket flick that has immense integrity and deserves everyone’s allegiance.

The only favored non-comforter right now is No Country for Old Men — I know it, HE readers know it, David Carr knows it. I am respectful of Atonement and wouldn’t flinch too badly if it won. The other three contenders besides this and Atonement should be Sweeney Todd, Zodiac and Before The Devil Knows You’re Dead, but this won’t happen because of the softie mentality.

If I were Benito Mussolini I would round up the softies in minivans in the middle of the night and send them off to reeducation camps in the Mojave Desert, and it would honestly be for their own good. I would drill them in the morning with calisthenics, subject them to film and film-debate classes and serve them hot healthy meals. And after their release from Movie Reducation Stalag 17 they’d never again consider certain far-from-masterful films like Juno or Enchanted or Charlie Wilson’s War for Best Picture.

I usually run box-office figures on Saturday morning, but I was out of business with my cell phone yesterday due to my street-level Boston apartment being in a perfectly infuriating AT&T “dead zone.”

No Country for Old Men added theatres, took in 4,468,000…$4000 a print. Joel and Ehtan Coen’s film is looking at a $40 milllion tally during its initial run & another $10 million or so once the awards and nominations start coming in. My numbers guy says “it’s basically an urban uptown picture that will do very little business in the boonies.”

Why is that, I asked? People in Redville aren’t smart enough to appreciate a first-rate arthouse thriller? “Hinterland audiences don’t want to know from arthouse,” he said. “Arthouse shmarthouse…they just want to be entertained.” If by clapping my hands I could permanently vacuum this attitude out of humans and send it into the hottest caverns of hell and keep it there, I would clap my hands.

Strictly on a hired-gun basis, Martin Scorsese has directed a nine-minute Hitchcock homage-cum-wine advertisement called The Key to Reserva. It stars Simon Baker (The Devil Wears Prada) and is somewhere between not half bad and fairly good — witty, amusing, well-shot. Then again, Brian DePalma used to make entire films in this vein in the ’70s and ’80s.

The funniest part is a preface in which Scorsese explains to an interviewer (who strongly resembles Ted Griffin, the Ocean’s 11 and Matchstick Men screenwriter) that the short is based upon three pages of a script for a Hitchcock film that was never shot. The hyper, over-caffeinated Scorsese is half natural-Marty and half-“character.” Scorsese could play this guy in a weekly reality series about a hyper, over-caffeinated filmmaker going through various creative adventures, and I wouldn’t miss a segment.

A reader has compared The Key to Reserva to Wes Anderson‘s American Express commercial from a couple of years back. I prefer Anderson’s because it’s about its own here-and-now (i.e., here-and-then) thing. Then again, I love the mania that led to Scorsese dressing an Eva Marie Saint-like actress in the exact same evening dress that Saint wears in North by Northwest.

Reserva is a Spanish wine produced by the Friexenet company, one of the giant Cava houses in Catalonia, Spain, that produces natural sparkling wine.