Sean Penn has been named jury president for next May’s Cannes Film Festival, which will run from 5.14 to 5.25. What does this signify? Nothing. The Cannes people got in touch, Penn said yeah, off to France and whoop-dee-doo.

The top five films in the Village Voice/L.A. Weekly Film Poll: There Will Be Blood, No Country for Old Men, Zodiac, 4 Months, 3 Weeks and 2 Days and I’m Not There.

“Speaking of polemics, I know I’m not the only one among us who loathes The Diving Bell and the Butterfly, aka My Left Eyelid, aka Awakenings for the smart set. Yes, I’m talking to you, Scott. I’d dis the thing myself, but I’d probably have to watch it again to do so properly, and we all have our limits — mine came about two minutes into the interminable, pretentious, Brakhage-for-dummies POV shtick at the outset of Butterfly.” — Village Voice critic Nathan Lee in a 1.2.08 posting for the Slate Movie Club.

Forget Jorge Camara‘s statement of hope. The WGA has told the Hollywood Foreign Press Assn. “in no uncertain terms to forget about any chance of an interim deal that would allow NBC to air the Golden Globes,” reports Variety‘s Dave McNary.
“The WGA has great respect and admiration for the Hollywood Foreign Press Assn., but we are engaged in a crucial struggle that will protect our income and intellectual property rights for generations to come,” the guild statement read. “We will continue to do everything in our power to bring industry negotiations to a fair conclusion. In the meantime, we are grateful for the ongoing support of the Hollywood talent community.”

One of Chris Rock‘s best bits at a recent sold-out Madison Square Garden show “involved a sideways reference to his personal life. While discussing Senator Hillary Rodham Clinton‘s presidential campaign, he mocked the notion that she had presidential experience, explaining that marriage doesn’t confer professional expertise. By way of example, he mentioned his own marriage. ‘I’ve been with my wife for 10 years now,’ he said. ‘If she got onstage right now, y’all wouldn’t laugh at all.'” — from a 1.2.08 N.Y. Times review by Kalefa Sanneh. 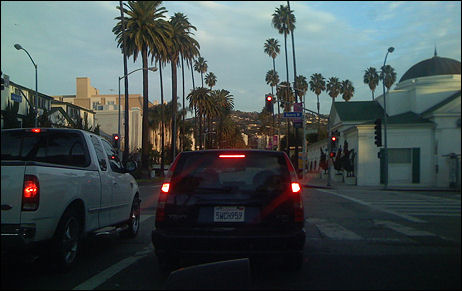 “The big story of 2007 really, in critical discussion, is the Trilogy Of Critical Onanism (in order of jerk-off) — The Assassination of Jesse James By The Coward Robert Ford, Zodiac and There Will Be Blood.” — from David Poland‘s 1.2.08 Hot Button column (even though the page identifies itself as “The Hot Button — January 2, 2007”).
I could be snide and call this the flip-side of the Poland Curse. If you believe in the legend that any film strongly pushed by Poland for Best Picture contention is all but doomed, you might also conclude that any film he calls masturbatory probably has considerable merit.
Of course, presumption isn’t needed in this instance. Minus these three films 2007 would have been a much leaner feast. Zodiac is my choice for the Best Film of the Year, and currently sits on so many Top Ten lists that it seems silly to debate Poland’s jab.
That one lantern-lit night shot in Jesse James — i.e., the train coming ’round the bend with the James gang is waiting to stick it up — is so drop-dead breathtaking that it justifies the entire film’s place in the ’07 pantheon. (As well as cinches Roger Deakins‘ Best Cinematographjy Oscar.)
It took me a second viewing to realize that the sickness running through There Will Be Blood — a malevolence that climaxes with the bowling-pin finale — has a stick-to-the-ribs quality that grows more scalding and pernicious the more you re-view and re-think it.

Cristian Mungiu‘s 4 Months, 3 Weeks & 2 Days “manages to deal with abortion without advocating any stance other than compassion,” writes Times Online critic Kevin Maher. “It illustrates what happens when a woman’s right to choose her biological destiny is removed, and yet it also shows a picture of abortion that would please the most adamant pro-lifer.”

And yet, as I wrote last summer, the likelihood of any American right-to-lifers seeing this movie is next to nil. Their commitment to stopping abortion is sincere, but it pales next to their xenophobia. I suspect that most conservative Americans would rather jump into a raging volcano than see 4 Months, 3 Weeks & 2 Days.
The right-to-choose and pro-life viewpoints in Mungiu’s film “cancel each other out, leaving a moving portrait of two lonely women who bond in an unforgiving regime,” Maher writes.
“It’s very difficult to explain why the film moves so many people,’ says Mungiu, who shot the movie in 2006 for 600,000 euros. ‘But I honestly believe that it has a soul. As soon as we finished editing it we knew that we had something strong, emotional and balanced. It is a film that speaks about something important without ever being preachy.” 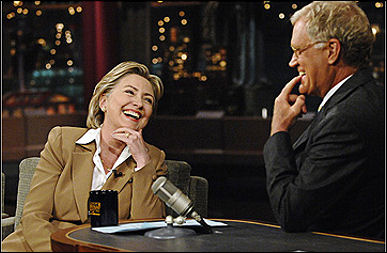 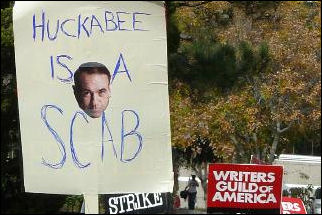 Just when some of us were getting all alarmed about the Golden Globes being a celebrity-free disaster due to NBC’s declared intention to broadcast the 1.13 event without or without a strike agreement (because a lack of one would have guaranteed that most of the talent wouldn’t show up), along comes an announcement, posted on Deadline Hollywood Daily, from Hollywood Foreign Press Association president Jorge Camara, to wit:
“On Saturday morning, December 29, 2007, [HFPA] attorneys began discussions with the Writers Guild of America to enter into an interim agreement similar to that entered into by the WGA and Worldwide Pants, which permits writers guild members to go back to work writing for The Late Show With David Letterman. We feel that the Late Show With David Letterman agreement is very reasonable, and hope and expect the WGA will agree to the same terms and ultimately permit the Golden Globe Awards to be broadcast as scheduled, without picket lines, on Sunday, January 13.”

Deadline Hollywood Daily‘s Nikki Finke is reporting that “there’s a secret meeting of some top screenwriters — the really, really successful ones known as the A-listers — coming up this weekend and their intention is to band together and make a powerful coalition that will force the WGA leadership to accept whatever deal the DGA makes with the AMPTP. Many of these big movie scribes are hyphenates who carry cards for both the writers guild and the directors guild.”

Given the longish length of Zodiac (the Director’s Cut DVD runs 162 minutes) and the general theme of obsessiveness and meta-detail, it seemed fitting that this morning’s phoner with director David Fincher should run longer than usual and go into a little more technical detail than normal. We talked for 49 minutes and the time just flew. 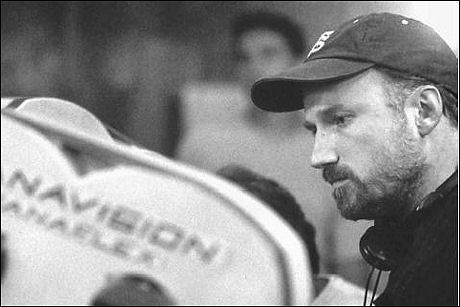 We began by discussing Fincher’s The Curious Case of Benjamin Button (Paramount, 11.28), which he hasn’t test-screened or even come close to finishing. To go by yesterday’s posting (which came second-hand from a below-the-liner who allegedly worked on it), this adaptation of F. Scott Fitzgerald‘s 1922 short story may be more emotionally affecting than the Fincher usual-usual, which has always been on the dark, visually audacious side.
I told Fincher my only problem thus far is with the name “Benjamin Button,” which sounds like something out of Hans Christian Andersen. Fincher doubts if the title means anything to anyone these days, and doesn’t hold the Fitzgerald association in terribly high regard. “He probably wrote the story for drinking money,” he says.
We moved on to (a) digital photography and the revolutionary qualities that after-dusk images now possess; (b) a reported tendency on his part to ask certain actors (or at least Zodiac costar Jake Gyllenhaal) to perform numerous takes of a given scene until it’s right; (c) the bizarre cuts that were made to Zodiac due to test-screening reactions (like the 45-second black-screen time-passage sequence), (d) the fact that Zodiac is currently listed as the 4th best film of ’07 on the Movie City News critics’ chart (even though this liking hasn’t translated to any Best Picture awards), and so on. 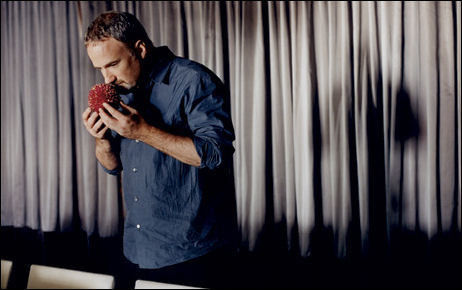 The money quote comes right at the beginning when Fincher asks me, “Where do I send the check?” Again, the interview in all of its raging 49-minute glory.