By calling the next James Bond film Quantum of Solace, the producers are announcing their intention to stay with the dark-flirting, psychological-emotional realism that began with Casino Royale. It will be no big deal at all to write a main credits song for this — just ignore the title. Who cares if the singer literally belts out the words “quantum of solace”? Better this than something in the vein of Goldeneye or Octopussy or whatever. It’s a title that says “if you’re looking for a check-your-brain-at-the-door thriller, look elsewhere.”

I wasn’t sure about who was in the cast of Scott Frank‘s The Lookout when I first saw it early last year, so when the cute redhead showed up I was initially persuaded I was watching Amy Adams. It was actually Isla Fisher, whom I’d first noticed in ’05’s The Wedding Crashers.

I’m not trying to make a big deal out of this, but they’re both redheads, they both project that bubbly-chirpy thing, they’re roughly the same age (Adams was born in ’74, Fisher in ’76), the same size (Fisher is 5′ 3″, Adams is 5′ 5″) and they definitely resemble each other. And they were both born overseas (Adams in Italy, Fisher in Muscat, Oman). That’s all, nothing more, just saying.
Fisher hasn’t lucked out with a big breakout role like Adams did with Enchanted but she’s (apparently) the female lead in Definitely, Maybe and she’s engaged to Sacha Baron Cohen. (Their daughter, Olive, was born last October.)

I got the hell out of Dodge — i.e., Park City — yesterday afternoon at 5:30 pm, slept a few hours, piddled around and then drove early this afternoon to rain-soaked Santa Barbara. Cats and dogs, cats and dogs…and I didn’t bring an umbrella. Flu gone, cough lingering…and the solution to all woes and precipitations is to hike eight or nine blocks in this scatalogical downpour from the Santa Barbara Hotel upto the Arlington theatre for the SBFF’s opening-night presentation: Adam Brooks‘ Definitely, Maybe (Universal, 2.14). 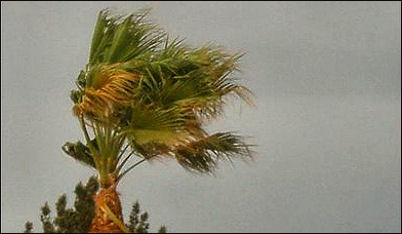 Maybe but Most Likely Not is my honest response as I sit in my hotel room at 6:20 pm. (The film will begin a little after 8 pm.)
I’ve been told that Definitely Maybe, a romantic whatever that costars Ryan Reynolds, Abigail Breslin, Isla Fisher, Derek Luke, Elizabeth Banks and Rachel Weisz, is surprisingly okay. But how to ignore the fact that the director is Adam Brooks, the man who gave us Bridget Jones: The Edge of Reason? And Wimbledon? (I never saw The Invisible Circus.)
Would you want to go outside and slosh around and get your feet wet and maybe usher in a return of the viral furies in order to see a Valentine’s Day attraction aimed at the girls who move their lips as they read…not Jane, which went out of business last summer….what glossy monthlies do smug, self-absorbed young women read these days?
The press kit synopsis states that Reynolds’ character, a 30-something Mahattan dad in the midst of a divorce named Will, is surprised when his 10 year-old daughter, Maya (Breslin), starts to question him about his life before marriage. Maya wants to know absolutely everything about how her parents met and fell in love.” Fine so far, but wait…where’s mom? Why hasn’t she had similar previous conversations with Maya? Who is mom? Is she dead? The press kit won’t say. 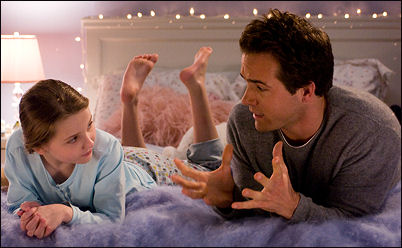 Beginning with his arrival in New York in 1992 to work on “the” presidential campaign (the press kit doesn’t hint at political leanings), Will “recounts the history of his romantic relationships with three very different women.”
He “hopelessly attempts a gentler version of his story for his daughter and changes the names so Maya has to guess who is the woman her dad finally married,” the press kit says. What? Maya is 10 years old, Will is in the midst of a divorce (presumably from one of the “three very different women”), and he’s kept his soon-to-be-ex-wife’s identity a secret from their own daughter? I could ask all kinds of inane questions, but one of the following is certain: Definitely, Maybe has a revoltingly coy premise/plot, or the Universal press-kit writer is making it sound that way.
Yeah, yeah: get out the galoshes and the raincoat and go see the damn thing. 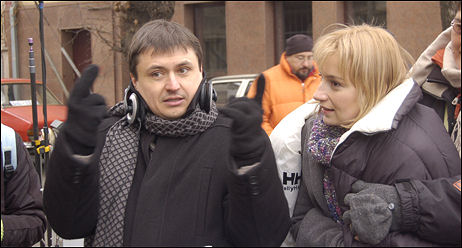