In keeping with yesterday’s Ted and Caroline Kennedy endorsements, Barack Obama would do well in Thursday’s Los Angeles debate to deliver a Hillary rip that’s as good as this classic JFK slam against Richard Nixon — something blunt and funny that makes a real bulls-eye point.

A clue about why director Mark Romanek walked away from that $100 million Wolfman shoot, from a very reliable source: “Among other things, the Wolfman script wasn’t ready before the strike began.”

Earlier today N.Y. Times Oscar columnist David Carr (a.k.a., “the Bagger”) came up with a few fresh titles based on the No Country for Old Men acronym (NCFOM). My favorite is No Coin Flip Ordains Mercy. It took me four minutes to come up with my own: Nihilist Crazy Fulfills Oscar Majesty. Others?

“The Guild voters have not been their usual reliable selves in predicting Oscar trends this year, but the membership overlap with the academy is just too overwhelming to ignore the winds that seem to be blowing for the Coens.
“Referring to the critical landslide No Country for Old Men has received as well as the multiple critics awards for SAG’s best actor, Daniel Day-Lewis, and best actress, Julie Christie, one wag said, ‘The critics groups [seemed] to hijack the Oscars this year with their own picks.’ If this is the way the Oscars also are headed, it would be hard to argue the substantial influence critics are having on the race this season — more than ever.” — from Envelope columnist Pete Hammond‘s latest bang-out (dated 1.28).

The less money you have to work with, the more visually creative you’re forced to be. (And vice versa.) And yet Mark Romanek (One-Hour Photo) recently walked off Universal’s The Wolfman (i.e., the Benicio del Toro vehicle) because, according to a Nikki Finke item, “He’s a purist, an artiste, an exquisite craftsman, but he just had a budget schedule” — a reported $100 million — “he couldn’t accomodate…he just blew the opportunity of a lifetime.” This doesn’t add up at all. Nobody’s consumed by that much hubris…are they?

Salon’s Andrew O’Hehir (whose last name I’ve never learned how to pronounce…do you say it like Chicago’s O’Hare airport?) has an indie-film column on Salon.com called “Beyond the Multiplex”, and today he has an interview with 4 Months, 3 Weeks & 2 Days director Cristian Mungiu, along with an mp3 interview that won’t load.

Why couldn’t I stop myself from chuckling while reading this 1.29 N.Y. Post story (by Jamie Schram and Dan Mangan) about some douchebag who scammed and hoodwinked several people (including Tom Cruise) by pretending to be Kim Ledger, the grief-struck father of Heath Ledger? Using the cloak of tragedy to exploit people’s emotions (and to attempt to scam free death-swag) is beyond foul, and yet a good con man will never let a thing like decency stand in the way. It’s so outrageous it’s almost a movie — The Wake Crasher.

Not to nitpick, but N.Y. Times DVD columnist Dave Kehr has gotten it slightly wrong in his review of the new double-disc El Cid DVD by claiming it was “filmed in Super Technirama, a 70-millimeter widescreen process.” Anthony Mann‘s epic was actually filmed (as was Spartacus) on a 35mm, 8-perf, horizontal-through-the-gate process that was then blown up into 70mm. The correct term would be that it was shown or “presented” in Super Technirama 70.
Otherwise, Kehr does a nice job of explaining the various financial motives and political back-currents behind the making of El Cid, and the resultant metaphors that one could fairly apply to the finished film.

10 Comments
Bardem, Durling at the Arlington

The best interview of the ’08 Santa Barbara Film Festival — easily the warmest and most charming — happened last night between No Country for Old Men star Javier Bardem (wearing an exquisite dark-blue suit) and SBFF director Roger Durling. Half confessional and half goof-off session, it was marked by laughter, honesty, astute insights and openly longed-for bathroom breaks. 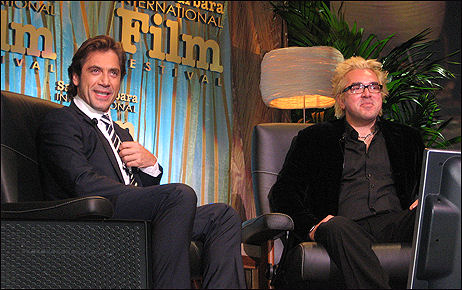 Perhaps relaxed by their Latin connection, Durling’s questions were simple but down to it, allowing Bardem to roll every which way and be his uncannily articulate self (especially for someone whose English skills were marginal four years ago). Calling it “a total loosey-goosey pleasure” sounds like a suck-up sentiment, but that’s what it was. 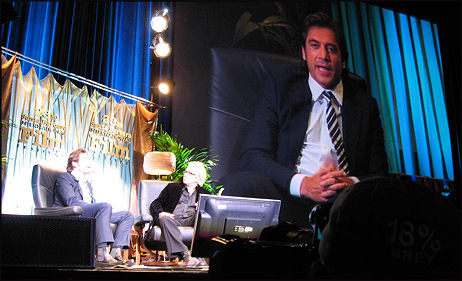 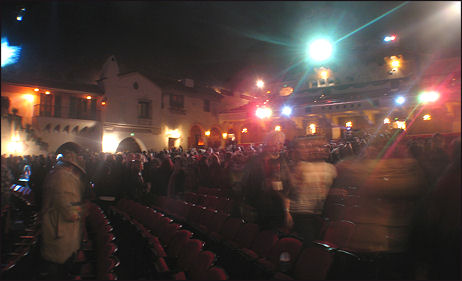 For those who’ve never visited Santa Barbara’s Arlington Theatre, it may be hard to comprehend that this is a photo of the actual interior and not some outdoor town square in Barcelona or Vera Cruz, Mexico
January 29, 2008 9:22 amby Jeffrey Wells
63 Comments
Cautiously standing

“When Bush warned the Iranian government that ‘America will confront those who threaten our troops, we will stand by our allies, and we will defend our vital interests in the Persian Gulf,’ Obama jumped up to applaud. Clinton leaned across Sen. Joseph Biden (D-Del.), seated to her left, to look in Obama’s direction before slowly standing.” — from an account of last night’s State of the Union speech by The Hill‘s Alexander Bolton.

Hats off, older women and Hispanics, for coalescing solidly behind Hillary Clinton coast to coast, and thereby all but ensuring the death of a beautiful dream and (bonus!) the triumph of a frosty and divisive harridan whose candidacy will unite the right by inflaming it, and whose presidency will bring back a corrosive revival of the Hate Wars of the ’90s. Precisely what this country needs.
A Newsweek report explains that Hispanic voters are guided partly by ignorance (a fall ’07 survey found that a quarter of Hispanics had “never even heard” of Obama) and racial animosities (i.e., longstanding competitive struggles with African- American communities “over resources, representation in politics, education”).
The myopia pervading the ranks of middle-class women has come into clear relief over the last several weeks. Rather than turn the page and usher in the possibility of a new era and a new attitude, they want a woman in the White House…period. The likelihood that Hillary forces will go down to defeat waving the flag of sisterly solidarity or, if she wins, revive the rightist rage of the ’90s matters not to them. The possibility of symbolic gender triumph is all. They will not see.
Santa Barbara social columnist Craig Smith told me last night that every over-40 woman he knows in the area is square behind Hillary — no ifs, ands or buts. Consider, also, the emotionally fevered “with us or against us!” sentiment in this anti-Ted Kennedy statement issued yesterday by NOW (Nat’l Organization of Women).
Politico‘s Jeff Ressner spoke with poet-rocker Patti Smith during Sundance and even she — Patti Smith! — was skeptical about Obama. “I’m still waiting to hear an emotional connection to him,” she told Ressner. “I haven’t felt it, and I don’t know why.” I think I do. Forget it. Game pretty much over.