Support on Patreon Follow @wellshwood
3 Comments
Yes We Can again

For those who missed this when it first went up last week. Yes, you shouldn’t have.

During a discussion last night on Keith Olbermann‘s MSNBC show, an outspoken female commentator (30s, longish dark hair, didn’t write her name down) invoked the legendary words of Tom Hanks‘ Jimmy Dugan character in a discussion of Hillary Clinton‘s repeat performance at Yale University of the old “misting up the day before a big primary” routine that worked so well for her in New Hampshire.

Dugan, of course, was the snarly, tobacco-chewing manager of a female baseball team in A League of Their Own who said, “There’s no crying in baseball!” And this was echoed by the commentator’s words: “There’s no crying in politics! I was with her the first time but not again. You can cry to get out of paying a traffic ticket when a cop pulls you over, but not the day before Super Tuesday.”

Here’s a short political manifesto written by a Brookline-residing mom, titled “Why Caroline Kennedy and I are for Obama” and sent to me a few minutes ago: Her thinking is summed up in four words: “It’s about our kids.” It’s the most moving and concisely stated vote-for-Obama plea I’ve read since the primary season began.
“Remember when we were young idealists, 18 years old, voting for the first time? Who was your first? The first candidate I voted for was Jimmy Carter. I felt empowered, like my vote mattered, like together, we could change the course of history.
“That’s the last time I voted for the winning candidate. In the Reagan years I became increasingly disillusioned and felt completely out of touch with the rest of the country. I never liked Bill Clinton, although I liked his policies. He seemed sleazy to me, and has since revealed his base tendencies. But all that is beside the point.
“Our kids, Caroline and mine, are now of voting age and this will be their first presidential election.
“We brought these kids into a world where global warming, off-shoring, the shrinking of the American dream, housing priced out of their reach and failure of the safety net of Social Security and Medicare will be their reality.
“It’s our duty now to listen to them. This is their future and Obama is their candidate.
“He has shown that he can enlist the young en masse.
“In Caroline Kennedy’s words: ‘Senator Obama is inspiring my children, my parents’ grandchildren, with that sense of possibility.”
“We’ve left a mess for our kids: they’ll never be able to own a home, they’ll never have job security and they’ll never be able to retire. Give your kids the President they want.”

Of all the actors Vanity Fair could have picked to stand in for Cary Grant in a restaging of the classic crop-duster scene in Alfred Hitchcock‘s North by Northwest, they chose (who else?) Seth Rogen. They even had the original makers of the sleek gray suit that Grant wears in the 1959 film, Norton & Sons of London’s Savile Row, to weave a near-duplicate for the somewhat out-of-shape star of Knocked Up and The Pineapple Express. This and other Hitchcock recreations are part of a special article in the Hollywood issue. 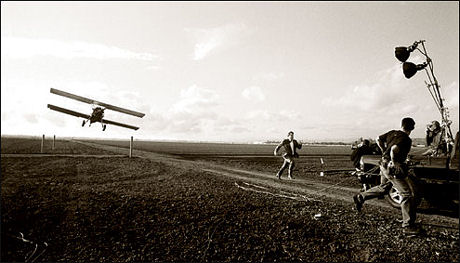 An excellent pro-Obama argument by author Michael Chabon (Gentlemen of the Road, The Mysteries of Pittsburgh), based on the idea of saying “no” to fear or what he calls “the phobocracy.” 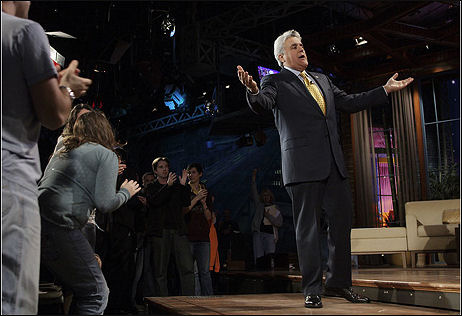 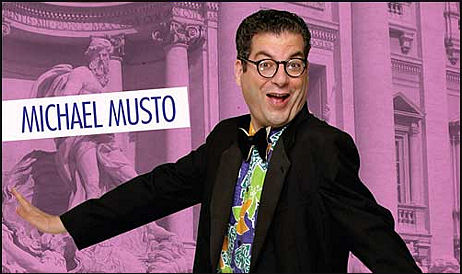 With Fox honcho Peter Chernin reportedly telling pals that the WGA strike is “over,” it feels good — secure, comforting, bucks-up — knowing that the splashy, tedious, quality-ignoring Oscar show will almost certainly happen on 2.24. And it feels good to contemplate once again the Vanity Fair Hollywood issue group-shot cover, as we all do every time this year. 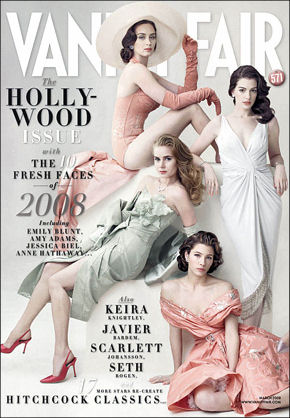 One sure way to get hit by a shitstorm is to qualify that statement made last weekend on a Fox News political talk show by conservative pundit Bill Kristol, to wit: “Look, the only people for Hillary Clinton are the Democratic establishment and white women…it would be crazy for the Democratic party to follow the establishment that’s led them to defeat year after year…white women are a problem but, you know, we all live with that.”
The last part of this statement is obviously sloppy and offensive and misogynist, but (okay, bring it on) older white women are Clinton’s biggest supporters. More than any other Democratic voting bloc, they’re the ones standing in the way of the Obama wave because they feel so in league with Hillary and are so in love with the symbolism of a woman occupying the Oval Office, regardless of the massive Hillary negatives (unifying the right, voters not wanting to return to the psychodrama of the ’90s, etc.) and the polls showing she could very possibly lose to John McCain next November.
But you can’t say this without being accused of crude thinking or offending all these women voters and thereby deepening their Hillary support. The only truly safe and inoffensive thing to say about older white women voters supporting Hillary is….they don’t exist. Except they do. Kristol was wrong, yes, but not entirely so.

25 Comments
Return of “I drink your milkshake!” 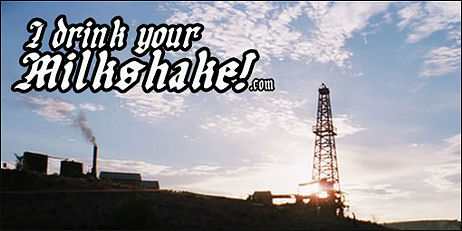 In a 2.3.08 N.Y. Times column about irrational Hillary haters, inspired by Jason Horowitz‘s GQ piece about same in the January issue, Stanley Fish notes two rational reasons for being against the New York Senator: (1) Believing that “her personality [is] unsuited to the tasks of inspiring and uniting the American people,” and (2) believing “that if this is truly a change election, she is not the one to bring about real change.”

Then he mentions “the next level” — i.e., “personal vituperation unconnected to, and often unconcerned with, the facts.” One permutation is the obsession among some with the “strangeness” of Clinton’s eyes. (Horowitz’s piece says that “analysis of [her] eyes is a favorite motif among her most rabid adversaries.”) I always stand by reasons #1and #2, but the deep-down truth is that her eyes bother me also. They bring back an almost primal reconnection with the eyes of a particular eighth-grade teacher who used to get on my case and give me detention and bring levels of misery into my 13 year-old life that I didn’t know existed.
It’s deeply unfair and hurtful, really, to bring up a facial feature as a sticking point, but it’s also fair to say that your basic attitude and spiritual essence starts to work its way into your features once you pass 40. Because it does.

That TV ad for Juno with Mott the Hoople‘s “All The Young Dudes” on the soundtrack is driving me insane. It’s playing over and over and over on the tube, and I’m hating the big Juno “sell” because it’s not selling the movie but a huggy-sensitive ad agency version of it. I may be the only person having this reaction, but the ad is exerting an almost Norbit-like effect. If I hear the words “the best thing you can do is to find a person who loves you for exactly who you are” one more time…