After seeing Alan Ball‘s Towelhead (formerly Nothing Is Private) in Toronto last September, I wrote that “there’s no question about it being smart, thoughtful and high-grade. It’s not 100% flawless (I had two or three speed-bump issues) but it’s certainly a sturdy, complex character drama that’s 100% deserving of respect. It’s obviously one of the most original, daring films about adolescent sexuality ever delivered by a quasi-mainstreamer. It’s also a sharp look at racism (and not just the American-bred kind) and a sobering portrait of the rifts and tensions between American and Middle-Eastern mindsets.”

Somebody help me out here because this is weird. Warner Bros. has two dependent distribution arms, Warner Independent and Picturehouse, under its wing, and Defamer‘s Stu Van Airsdale is reporting that Picturehouse, seen by most veterans of the trench as the more shrewdly guided, successful and geared-up of the two, may soon be shut down? What?
A story posted this evening by Variety‘s Anne Thompson said that Picturehouse chief Bob Berney and Warner Independent prexy Polly Cohen are “likely” to accept a bicoastal power-sharing arrangement that will preside over a merged operation — Warner Indiepicturehouse.
“We have yet to hear where Berney will wind up,” Van Airsdale writes, “though a popular rumor has him sharing power at Warners’ other struggling boutique outpost, Warner Independent Pictures, with current WIP boss Polly Cohen.” I commented last night that this sounds like a post-Ides of March power-sharing deal between Octavian and Marc Antony. I’ve been told all along that Berney has been squeamish about the deal that Warner Bros. has wanted him to go with.
Van Airsdale has also reported another scenario with Berney “starting fresh at a new company underwritten with hedge fund cash, [which] would suit him well with Cannes on the horizon and Warners’ decreasing overall interest in the volatile indie marketplace. Warner Bros. would gladly get out anytime, but we hear they’re willing to move ahead with Berney if he’s interested.”

Nobody can be called a near-lock for a Best Actor nomination at this stage of the game. With the start of awards season being a good four months away, it’s way too early to even speculate. Except, arguably, when it comes to Richard Jenkins‘ work in The Visitor. A quiet, heart-melting lead performance by one of the finest character actors in the business, Jenkins’ Walter Vale is one of those career-lifting roles that SAG members tend to warm to, remember and single out. 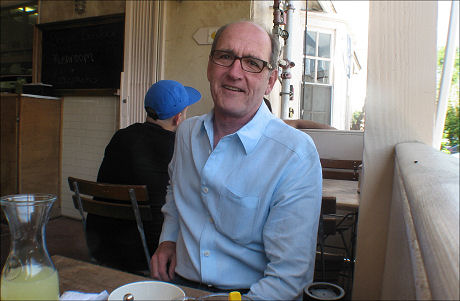 Especially when the actor in question has been stand-out superb in a long run of supporting roles over the last 20-plus years. For me Jenkins began to come into his own in the mid ’90s with two lawman parts — a police detective in Mike Nichols‘ Wolf (’94) and a gay FBI agent in David O. Russell‘s Flirting With Disaster (’96). I think Jenkins’ career took off with one scene in particular — when his agent reacts to a dose of LSD that’s been put into his food. It’s the single most hilarious drug-related scene in modern cinema.
That was twelve years ago, and for my money Jenkins has hit long doubles or triples with eight performances since, not counting his work in The Visitor. I’m thinking of the psychiatrist in There’s Something About Mary, the sheriff in Scott Hicks‘ Snow Falling on Cedars, some kind of offical or investigator in Sydney Pollack‘s Random Hearts, an EPA agent in Me, Myself & Irene, an aging racist murderer in am FX feature called Sins of the Father, a divorce attorney in Intolerable Cruelty, an uncredited but hilarious part in I Heart Huckabees, and 10 episodes as Nathaniel Fisher in HBO’s Six Feet Under.
The Visitor‘s Vale is a morose 50ish college professor who goes through a spiritual wake-up by helping out a couple of illegal immigrants, and then falling in love with the Palestinian mother of one of them, a young man who teaches him how to play a native drum.
His next three features are a British horror-thriller called The Broken, Adam McKay‘s comedic Step Brothers(Sony, 7.25) with Will Ferrell and John C. Reilly, and the Coen brothers‘ Burn After Reading (Focus, 9.12).
Jenkins is doing interviews to plug the recent theatrical expansion of The Visitor, which is now playing in some 300 situations. We met at lunch time at Le Pain Quotidien and spoke for over an hour. Here are two portions of that chat, totalling maybe 15 minutes — selection #1 and selection #2. We’re tallking about Burn After Reading as the first mp3 begins. We get into the Flirtiing LSD scene in the second portion. 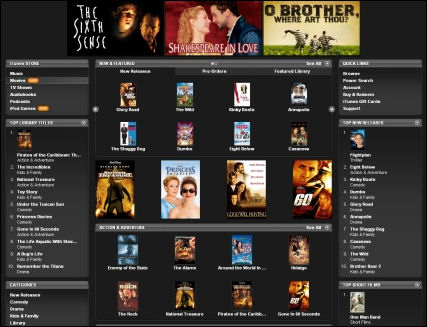 Reviled ABC news guy Charles Gibson (who, along with George Stephanopoulos, degraded the level of discussion during the Pennsylvania presidential primary debate), interviews author Arianna Huffington about her book, “Right is Wrong,” which explains how the lunatic right has taken over the conversation on values and patriotism.

Youth-pandering summer movies have been a cultural sludge pit for a long time. Not so much over their emphasis on brute sensation and animal hormones leading to a degradation and devaluation of whatever sensitivity and spirituality may be in the air (although that’s always been a problem), as much as the levels of talent and inspiration being too often lacking. There just aren’t enough Superbads or Dark Knights or Indy 4‘s to go around.
As much as this trend has pained me over the years, I was mostly amused when I read L.A. Times critic Kenneth Turan complaining about this because the fall-of-the-Roman-empire, mongrel-celebrating aspect of mainstream American movie culture seems to be just hitting him
“The reality is that, except for the ghettoized adult window in the fall, this dumber-is-better attitude is threatening to take over all of the major studios’ output,” he writes. “Not to put too fine a point on it, but the summer is killing American movie culture.
“With corporate owners demanding predictable profits, the studios have understandably narrowed their focus to the kinds of undemanding entertainments favored by the 25-and-younger audience that dominates theatrical attendance. And they are not just doing it during the summer, they’re doing it almost year-round.
“In all likelihood that tendency is even contributing to the nationwide loss of film-critic jobs that’s been so commented on of late. With so many films coming out that don’t really demand serious examination, and an aging readership that is going to fewer and fewer movies, newspaper editors in cities where (unlike Los Angeles, New York and a few other places) films are not an intrinsic part of local culture are probably figuring that it’s not worth the expense of paying anyone to examine them.
“And if critics go, the mechanism for encouraging audiences to go to good small films, for creating a demand for alternatives to what critic Richard Schickel has called Hollywood’s ‘big clanking machines’ goes with them. Is there any way out?”
Answer: Critics aren’t “going.” The power is simply migrating away from old-media critics with cushy salaries and abundant perks who dispense lordly judgments as if from a pulpit. Readers are more and more into conversing and arguing online (like they do on this site) than the practice of receiving wisdom from on-high print poobahs. Simple.

The Clinton team’s hammer-home message of Barack Obama being a :paragon of elitism” vs. Hillary Clinton’s touted rep as a holder of “testicular fortitude” is, of course, absurd. But tell that to your average Indiana or North Carolina Enquirer-reading prole. This is bad. This is less bad. This is good.

Yesterday’s sitdown with Fox News’ Bill O’Reilly was the most appealing interview Hillary Clinton had given in some time. O’Reilly’s pugnaciousness somehow makes her ogre-ish essence seem less malevolent. “It’s a personality contest, ” “Ya gotta be tough,” “Teddy Roosevelt was a great president,” etc.