Defamer‘s Summer Bad-Buzz Watch article, which went up late yesterday morning, focuses, of course, on the Big Three — Get Smart, The Love Guru and The Happening. Whatever, blah-blah, standard sniper-fire stuff. 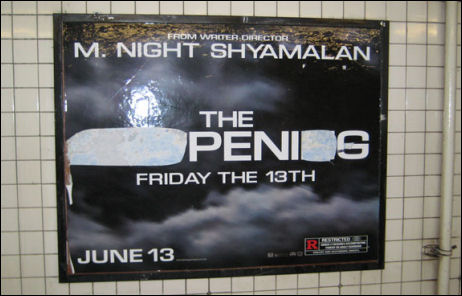 What’s funny or mildly amusing about this New York subway poster defacing lying just to the north of this graph? Nothing. It’s asinine. But what it tells you, I believe, is that the elite malcontents out there have picked up on the Happening vibe and are quietly massing against Shyamalan. The fact that 20th Century Fox hasn’t scheduled any press screenings (not just here but in hinterland burghs) tells you something.
I don’t trust what I’ve heard about Get Smart — too blunt, too simplistic — so I’m keeping mum.
I’ve heard that The Love Guru is pretty bad, yes, but doesn’t the concept, Mike Myers‘ makeup/appearance and the ad art make this point more clearly than any loose-talk item?

Last night on CNN, commentator Jeffrey Toobin noted that Barack Obama‘s victory margin “is without dispute — he has won the nomination…so without the deranged narcissism of the Clintons, I don’t understand why [this isn’t officially over].” Asked by his chuckling, mock-shocked colleagues what he really meant, Toobin said, “Well, what does that mean…it’s ‘her night’? He just won!”
GOP strategist Alex Castellanos, also appearing on CNN, said that in Clinton’s almost blustery, non-conceding “no decisions tonight” speech last night “she did everything but offer Obama the vice presidency.”
But “what other decision can she make?,” MSNBC’s First Read essay asked this morning. “Her speech, which came after the networks declared Obama the presumptive nominee, seemed akin to the losing football team remaining on the field after the game is already over and celebrating with its fans.
“A close friend and adviser said, ‘We were going flat-out until last night. We poured everything into winning South Dakota. Now she needs some time to decompress.’ Another said: “She knows she has maximum leverage right now.” The Clintons clearly believe that Obama needs her supporters — and that they can continue this dance for at least a few more days, despite pressure from party leaders to get it done.”
Decompress? In other words, instead of doing what any student of politics would consider to be the traditional, respectful thing — i..e, her conceding the nomination to Obama — she’s focusing instead on trying to chill down so she can personally feel looser and more relaxed? Is she going to double up on foot massages?
Hillary Clinton’s raging egomania is literally sickening. She’s a fiend. She will crawl out the landing gear of Obama’s jet when it lands in Denver and tear Lance Henrickson in half. (Thanks to HE reader Crow T. Robot. Thanks also to Bosco Bear.)
Which makes it all the more difficult to admit that as loathsome and despicable as Clinton is, it would still be the smart thing for Obama to ask her to be his Vice-President.
John F. Kennedy didn’t betray his “let’s get this country moving again” campaign mantra by making Lyndon Johnson, a vulgar, old-school wheeler-dealer, his running mate — he chose Johnson in order to win. Clinton is an absolute monster, but she believes in the right things and Obama, I suspect, will need a scrappy pit bull to help slap some deals together. You can’t be too high-minded in a scummy business like politics.
Clinton will bring along the middle-aged Appalachian-industrial Midwest rube vote (or certainly a greater portion of these good and gentle folks than Obama would otherwise get on his own), and she’ll certainly attract the millions of older, less-educated women who’ve been standing with her since last January and before. She is obnoxious with talons. She is Darkness Personified and nothing but trouble, but she believes in and wants to achieve the goals that Obama is committed to. The poor guy needs to hold his nose, shake hands with the devil and win the damn election, and move on from there.
That said, she is clearly trying to force Oabama’s hand in this thing, and if he decides to turn her down and go with someone else as Vice-President, Obama will be admired for having made a tough and principled decision. For HRC is truly sociopathic — one of the ugliest right-thinking liberals of all time.
As Politico‘s Roger Simon wrote this morning, Clinton’s “fighting words [last night] only increased the need for Obama to show that he can be strong, tough and in charge. Clinton’s unwillingness to recognize Obama as the victor only increased the need for Obama to act like a president and not like a doormat. And denying her a vice presidential slot may be a way of doing that.” 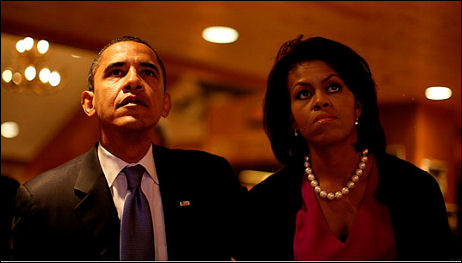