Tech Crunch’s Michael Arrington is reporting that “AOL is making across the board budget cuts on its blogging properties, we’re hearing from multiple sources. The cuts range up to 25% of each properties total budget, which falls mostly on personnel costs — bloggers are simply being told to take a couple of weeks off for now, and there may or may not be work for them later in August.” This situation is apparently affecting our good friends at Cinematical to some extent. Editor/critic Kim Voynar says “we’re still operating, we’re undergoing an editorial readjustment, things will be back to normal in a week.”

Thanks very much to amctv.com’s Christine Fall for tributing Hollywood Elsewhere as site of the week in a piece that went up earlier this afternoon. All flattery is welcome. Every little bit helps. Even when there’s no link to the term “site of the week” on the front page. If you go to the main site you have to click on the words “Future of Classic,” which means nothing recgonizable to me.

Grand New Party co-author and presumed Republican party stalwart Reihan Salam did a talking-head stint today on MSNBC’s Road to the White House, hosted by David Gregory. Salam is obviously whip-smart, but he has a disapproving scowl that kicks in when he hears something he doesn’t agree with. I’m sorry but he reminded me right away of James Arness in Christian Nyby‘s The Thing (From Another World) with a little touch of Rex Ingram, the genie from The Thief of Baghdad. A bit like an alien studying humans for signs of weakness. 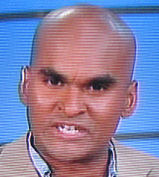 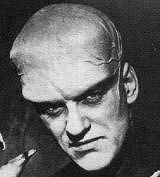 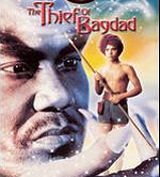 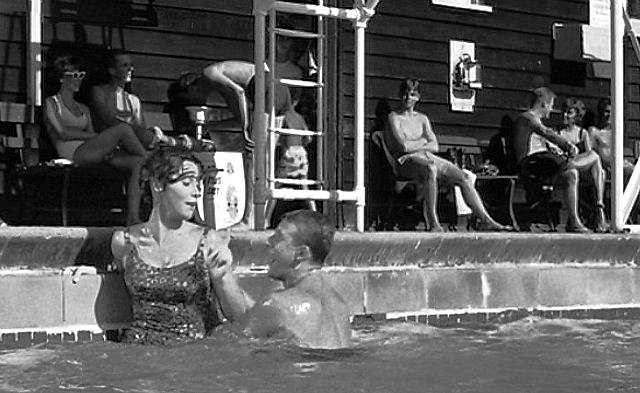 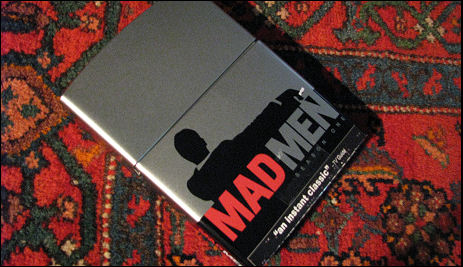 This photo doesn’t convey it well, but the Madmen DVD box set is shaped and even opens like a ’60s-style Zippo cigarette lighter.
July 24, 2008 11:40 amby Jeffrey Wells
26 Comments
Track

In discussing last night’s release of the new NBC/Wall Street Journal poll, which reported concerns and doubts among Barack Obama‘s qualifications and leadership chops, one MSNBC guest commenter said that “most Americans are just starting to get to know” Obama and that Obama “really hasn’t made the sale yet.” When the subject turned to a possible bump from the Middle Eastern/ European tour, another said “most Americans don’t even know [Obama] is over there now.”
Are Americans living in concrete bunkers located 150 feet underground? I’m constantly shaking my head about the fact that news commentators never acknowledge — aren’t permitted to acknowledge — how deliberately clueless “most” Americans seem to be about political matters. The primary campaign has been going for nearly a year and your typical low-information dolt is still saying “I don’t know who Barack Obama is.”
Said it before, said it again — get rid of the deadweight/dumbass element by making prospective voters take a simple 25-question quiz (in the vein of a driver’s license test) before being allowed to vote. Nothing too difficult or strenuous. Just basic stuff about world events and the price of rice. If they flunk it, they’d be given a chance to take the test again within, let’s say, 7 days. If they flunk that, no vote until the next election cycle.
A democracy can’t function effectively within a society grappling with significant levels of voter ignorance. Voters have to be educated and aware and interested in the process, or the system won’t work.
If I had the power, I would disenfranchise the deadweight classes so fast their heads would spin. At the same time those two American Teen guys would be out of the picture and relegated to the sidelines until they decide to make an effort.

The somewhat pretentious-sounding Vietnam movie being made in Tropic Thunder — the one starring the characters played by Ben Stiller, Robert Downey, Jr., Jack Black, et. al. — is called Rain of Madness, which has an obvious Joseph Conrad-ian ring. Here’s a promotional website that includes a trailer and (I think, have been told, haven’t found) a kind of mockumentary about the making of it.