ABC News and the Washington Post‘s Pete Yost have jumped into the John Edwards extramarital-affair-and-fathering-a-baby story, and Edwards has admitted to an affair with, according to Yost’s report, a “42 year-old woman,” although her name is Rielle Hunter. The ABC story, written by Rhonda Schwartz and Brian Ross, names Hunter and says her age is 44.
Edwards, however, is denying he’s the father of her child. He “told ABC News that he lied repeatedly about the affair with a 42-year-old woman but said that he didn’t love her” and “said he has not taken a paternity test but knows he isn’t the father because of the timing of the affair and the birth.”
I can understand an operator like Edwards lying about the paternity issue (if in fact he is lying, which many believe is the case) but to say in so many words that he doesn’t “love” Hunter strikes me as an inelegant and dismissive way to put it. It’s something a cad would say in this kind of situation. A guy proclaiming that he doesn’t “love” a woman he’s had relations with (and possibly fathered a child with) implies he doesn’t consider her worthy of a serious relationship and that he’s basically been seeing her for sex. That’s a pretty flagrant putdown.
Slate‘s Rachel Larimore has written that while she “may be proved wrong,” she’s not buying Edwards’ claim that he’s not the father. “He and Andrew Young, the ‘admitted’ father, both had an affair with Hunter? Possible, but yuck. And if Young is not the father, and Edwards is not the father, then who the heck is Young covering for? And why was Edwards visiting Hunter and the baby at 2:45 in the morning?”
Edwards won’t be going within 500 miles of the Denver Democratic convention later this month. And don’t expect every mainstream media publication to admit that this story was broken by the National Enquirer.

Some are saying that Quartermaine’s Terms was and still is the best play by Simon Gray, whose compulsive smoking and drinking finally killed him yesterday in London, at age 71. But I always had a thing for Otherwise Engaged, a very sharp and funny character study of a British publisher that I saw twice on the Manhattan stage in the mid ’70s — once with original star Alan Bates, and then with Dick Cavett, who wasn’t half bad. 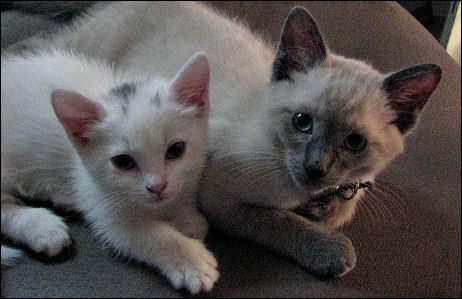 “From Robert Downey Jr.‘s purposely racist embodiment of African-American anachronisms to Jack Black‘s scatological humor, everything in Tropic Thunder qualifies as satire, not spoof. It’s an important distinction. Pauline Kael once noted that ‘unlike satire, spoofing has no serious objectives; it doesn’t attack anything that anyone could take seriously; it has no cleansing power.’

“Thus, the movie opens with inane fake trailers to introduce its fictional stars, surpassing the ones in Grindhouse for espousing actual ideas. Director-cowriter and star Ben Stiller offers a catharsis for everyone overburdened by bombastic storytelling, but even when the movie becomes playfully self-reflexive, it remains a keenly layered narrative.
“He returns to the movie-within-a-movie-within-a-movie metafilter so many times that the gimmick forces you to pay close attention and believe in the events as they transpire, without sacrificing the absurd edge of the equation. Jumping back and forth between Grossman’s office and the jungle, Tropic Thunder recalls the comical dread of Dr. Strangelove, where Stanley Kubrick cut between the war room and a nuke-wielding B-52. This one could have the subtitle How I Learned to Stop Worrying and Love the Blockbuster.” — from Eric Kohn‘s review on premiere.com, posted yesterday. 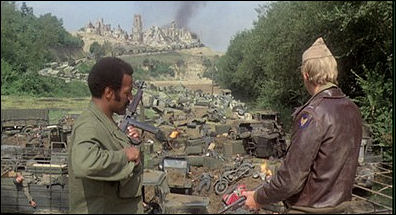 I had picked up on maybe four or five of these, but seeing them all together… whoa. Not that this will have the slightest effect on the thinking of the McCain crowd or even the fence-sitters, for that matter.

The other night Pineapple Express star-co-writer Seth Rogen told Jon Stewart that he’s “26, but I look 50. I’ll probably die in three years. I had back hair at nine. I had ear hair at 13.” Another guy who doesn’t look his age is Philip Seymour Hoffman, 41, who was looking more or less his age in Capote but looked about 59 (white hair, beard, the usual paunch) when he was in Cannes last May to promote Synecdoche, New York. There needs to be at least one other guy in his 20s or 30s or early 40s who looks a good 15 years older. Just one more.

HE reader Nick Zayas informs that Hulu just put up Joseph Sargent‘s The Taking of Pelham 1-2-3. The whole thing, in other words, is now free and streamable in reasonably decent quality. With “limited commercial interruption,” of course. 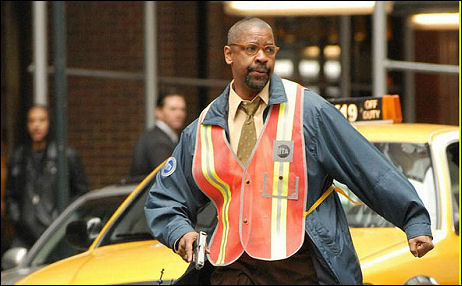 A grayed-up, middle-agey Denzel Washginton during shooting of Tony Scott’s The Taking of Pelham 1-2-3. (Photo stolen from JustJared.)

The new Tony Scott version with Denzel Washington (in the Walter Matthau role) and John Travolta (“as” Robert Shaw and another villain) won’t be out until 7.31.09.

Fantasy Moguls’ Steve Mason is reporting that Pineapple Express took in only $6.25 million on Thursday, which represented a 50% drop from its first-day tally of $12.1 million. David Gordon Green‘s stoner comedy “may” take in $27 million over the weekend and reach $45 million by Sunday night.

As it must to all men, death came earlier this evening to legendary manager, producer, book author and mover & shaker Bernie Brillstein. A good man with a rich sense of humor (particularly those darkly ironic aspects), Brillstein helped me out with stories when I was writing for Entertainment Weekly and the L.A. Times Syndicate in the ’90s. Here‘s Nikki Finke‘s recollection piece. 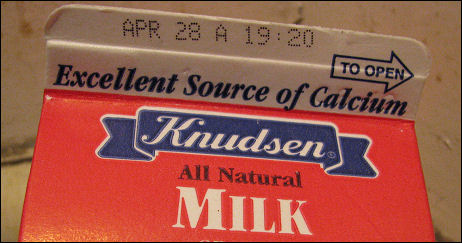 The cleaning guys pulled this out of the back of the refrigerator today, unopened.
August 8, 2008 12:41 amby Jeffrey Wells