Rielle Hunter‘s declaration that “she will not pursue DNA testing to establish the paternity of her 5-month-old daughter” despite former senator John Edwards having offered to participate in such a test is, of course, enormously fortunate for Edwards. The Washington Post‘s Lois Romano and Howard Kurtz reported this last night.
Today’s wrinkle is that Hunter’s sister Melissa has told ABC News that “I would challenge” Edwards to take a DNA paternity test because “somebody must stand up and defend my sister…I wish that those involved would refrain from bad-mouthing [her].”

Guess this main-title score. And this one.

Examine fivethirtyeight.com and tell me if you’ve come across a more thorough-seeming scientific data site about the coming election. Site creator-manager Nate Silver told MSNBC’s Keith Olbermann yesterday that the margin of error is high right now (7%) but that things will start to sharpen and clarify a bit more after the conventions and particularly after the first debate. Nonetheless, fivethirtyeight.com is now forecasting Obama over McCain with 294.7 to 243.3 electoral votes. 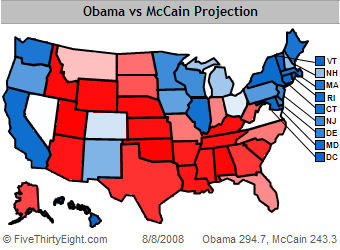 And HuffPost-er Mark Nickolas on “Why The Media Badly Needs A History Lesson.”

Philippe Petit‘s high-wire walk between the World Trade Center towers, the subject of the brilliant Man on Wire, happened on August 7, 1974. It was obviously quite the event, but for whatever reason I didn’t recall there being much news coverage of it. And yet I do remember an enormous amount of news coverage of George Willig‘s single-handed scaling of the south tower on May 25, 1977.

A toymaker and rock-climber from Queens, the 27 year-old Willig had built a special climbing device that utilized the vertical window-washing channels in the corner of the south tower. He began his climb at 6:30 am that morning, and made it to the top three and a half hours later. When he was a little more than halfway up the cops came down on a window-washing scaffold and tried to get him to abandon the climb, but Willig refused. He was arrested when he finished, but public acclaim was so enthusiastic — the N.Y. Daily News headline hailed the “Human Fly!” — that authorities only fined him $1.10, or one cent for every floor.
I was in the midst of producing a Save the Whales benefit concert in Wilton, Connecticut. I was as blown away by Willig’s stunt as everyone else, and so I decided to contact him and invite him to make an appearance at the concert, which was held in a large amphitheatre-like area on property owned by David and Linda Black, the parents of my ex-girlfriend, Sophie Black (who later became a respected poet). Willig didn’t say yes or no, but I announced in the Whale concert posters that “the Human Fly” would attend anyway. If he didn’t show I figured I’d just get on the mike and say “them’s the breaks.”
To my surprise, Willig and a couple of friends turned up on the day of the concert — a warm sunny day sometime in mid to late July of ’77 — and took a bow before a totally cheering crowd. It was quite a moment. David Black introduced him by saying Willig “believed in something — he believed in himself.”
Flash forward 31 years and everything that’s going on now including my huge enthusiasm for Man on Wire, which naturally reminded me of Willig. I read on his Wikipedia page that he lived in Los Angeles in the ’90s. It turns out he’s still living here, in either Woodland Hills or Canoga Park (according to online listings), and working as a commercial remodeller or something.
A week ago I thought it might be a cool thing to chat with Willig for old time’s sake. Maybe meet him for coffee, or maybe see Man on Wire with him, or maybe lend him a screener of it and talk to him about his reaction. Something like that. But I called three times (speaking at one point to a woman who answered the phone) and he didn’t respond. Presumably he wants to be left alone, doesn’t want to go there again, whatever…fine.
3:05 pm Update: Willig just called. He hasn’t yet seen Man on Wire but is hoping to, he says — perhaps this weekend. He actually knows Philippe Petit, who sent Willig “a congratulatory telegram or card or something the day after I climbed the tower.” And then they met at a dinner that night or the night after, at the invitation of ABC News. Willig speaks to Petit “every seven to ten years,” he says. “We’re on different tracks although we have this bonding thing…I feel fortunate to have a brother in a sense.”
Willig gave me the number of Michael Cardacino, a childhood friend who was there taking pictures as Willig made his ascent. Cardacino picked up the phone after I spoke to Willig and said he’d send me a scanned photo or two tomorrow.
Willig told me there’s actually another World Trade Center stunt guy “whom nobody remembers…Owen Quinn, who jumped off the top of one of the towers in ’75 and parachuted down and got away.” He lives in Moriches, New York.
Willig is a general contractor, and is currently working on building a house — his own — in Topanga Canyon.

Sadly, both of these guys are now dead and gone, and Bad Santa was only…what, five years ago? I love Bernie Mac‘s neutral expression as he listens to John Ritter‘s story about Billy Bob Thornton and some woman in a department store dressing room, and (although it’s not shown in this clip) the way he casually considers the reported port of entry. I was okay with Mac’s role in the three Ocean’s movies, and I wept for the guy when he appeared in Charlie’s Angels: Full Throttle (’03). Who dies at age 50 from pneumonia?

I’m already bored silly by the Olympic footage from Smog City. The opening ceremonies were nice, but I feel nothing from it right now. Guys rowing down a big river, girls playing volleyball, guys playing badminton…baaah! I can spot smoggy air when I see it, being a longtime Los Angeleno, and you can see it everywhere in the Beijing footage. And you can feel the vibes from the repressive status-quo Orwells running the show over there. I don’t need it or want it. Sensuous kittens, the Charles Laughton-slash-Night of the Hunter outtake thing at the Hammer this evening, column-writing, lifting weights, finally watching the Mad Men season box set, riding the motorcycle, etc.

It’s not “official,” but I’m hearing that In Contention‘s Kris Tapley has been nudged out of the Variety blog lineup for the coming Oscar Season. Tapley’s Red Carpet District blog for Variety was a seasonal that launched early last fall and ended six months ago, but Variety isn’t asking him to return. I wrote Variety‘s Dana Harris this morning to check but no reply so far.

Tapley hasn’t been eighty-sixed due to dissatisfaction with his work. RCD was a very sharp and comprehensive daily read for many of us, and I’m not unmindful of the fact that Tapley linked to Hollywood Elsewhere all the time. The issue, as one source puts it, is that Variety has “too many blogs” (Anne Thompson‘s, Michael Jones‘ “The Circuit,” Pamela McLintock‘s box-office blog, etc.) and the bloggy ad dollars can only cover so much ground.
One could interpret the phrase “too many blogs” as another way of saying that “Peter Bart‘s blog is now part of the mix and somebody had to go to make room,” but that’s just a personal view or suspicion. Bart has so far been an occasional poster at best, and almost certainly won’t be delivering half the extensive Oscar season coverage (legwork, updates, exclusives) that Tapley generated during the last go-around. But of course Thompson does a humungous amount of Oscar- season reporting and pulse-readings so it’s not like Tapley was the only one humping it.
This basically means the situation is back to square one as it was during the ’06 and ’07 season, when In Contention was a basic and necessary read along with the other six or seven Oscar-season blogs.

Fantasy Moguls’ Steve Mason is reporting a Dark Knight surge yesterday that over took Pineapple Express , beating the stoner comedy $7.8 million to $7.65 million — marginal — but with projected weekend tallies of $26.5 million vs. $22.9 million, respectively. This will be the fourth weekend in a row that Chris Nolan‘s film has been #1.
I asked about buying a large-sized Heath Ledger Joker doll the other day, and the guy at the counter said the demand was so overwhelming that sales guys for the manufacturer were actively discouraging retailers from placing any more orders. Has an American manufacturer ever anticipated an extraordinary demand for a faddish product? Manufacturers should have instantly realized after Ledger’s death that they needed to double or triple up on production. Did they do this? Of course not.