Six years old, and one of Spike Jonze‘s best spots ever. The lamp’s heart is breaking, the woman doesn’t get it and then she does. But that guy who narrates at the end with the Swedish-Danish accent…vat is it you say? You love red lamp too, yah?

Screw future revenues, No End in Sight director Charles Ferguson is saying. I’m loaded anyway, and what matters to me now is to get some fence-sitters out there to consider the message of my film (i.e., “did the Bushies screw things up in Iraq after the invasion or what?”) as they decide how to vote on November 4th.
Which is why as of Monday, September 1st, No End in Sight will be the first widely released feature film to screen in its entirety for free on YouTube. The highly-praised doc will be featured on its own YouTube channel and available to anyone with a computer and high-speed internet connection, as well as via the YouTube service on broadband-connected TiVo Series3 or TiVo HD DVRs, blah blah. Good thing, this.

Bill’s two best lines: (a) “Actually, that makes 18 million of us” and (b) “They actually want us to reward them for the last eight years by giving them four more. Let’s send them a message that will echo from the Rockies all across America: Thanks, but no thanks.”

Paul Schrader‘s Adam Resurrected has been selected to be shown at the Telluride Film Festival, which sorta kicks off tomorrow night but more precisely on Friday morning. I don’t believe that Tom Luddy or Gary Meyer would invite this film to their festival if it (a) didn’t have merit and value, and (b) if it was any kind of relative of Jerry Lewis‘s The Day The Clown Cried (’71), which has been the rap against it in the columns. Better to reserve comment until people see it this weekend.
It’s been explained that Schrader’s film, based on Yoram Kaniuk‘s novel, is about Adam Stein, an inmate and former circus clown living in an asylum in Israel and looking back on his having agreed to entertain Jews during WWII as they were led to their deaths in the camps.
I’m told Jeff Goldlblum is quite good as Stein; William Dafoe plays Commandant Klein.

Richard Dreyfuss, who will probably kill as Dick Cheney in Oliver Stone‘s W, speaking earlier this afternoon during an MSNBC interview from Denver. “I think the last eight years have destroyed 200 years of respect [for this country]. I think the Republican Party is corrupt through and through. They have been in office too long. They are too adept at thievery and moving the Constitution into places it was never meant to go. I think they have an extraordinary ability to divide rather than unite.” Has Walter Sobchak left the room? I think he has…cool. 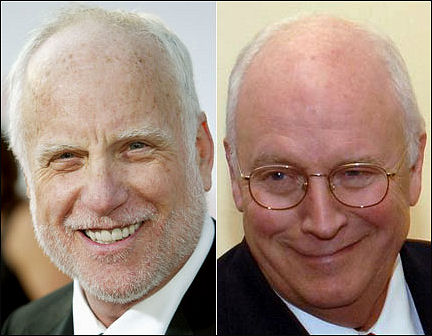 “John Edwards admitted to the affair [with Rielle Hunter] but said he’s not the father of her child — Ann Coulter is. Republicans, of course, are outraged. ‘A sex scandal? With a woman?'” — from a Bill Maher video rant (“What I’ve Learned This Summer”), apparently taped for the “Real Time” re-debut this Friday on HBO.

“An anti-spy thriller in which nothing is at stake, no one acts with intelligence and everything ends badly. Those who relish it might treat it as the second coming of The Big Lebowski; those who don’t might wonder at a story in which no character has a level head. ” — Hollywood Reporter critic Kirk Honeycutt, whose review was posted in today’s edition (concurrent with Wednesday night’s Venice Film Festival showing). 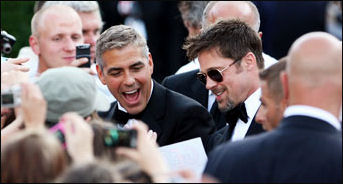 I read this Sarah Lyall N.Y. Times piece about drunken Brits in Crete two or three days ago, and I haven’t been able to forget the article’s money term — “alfreso oral sex contest.” Routine Joe Francis stuff on DVD, but reading it in the Times makes it seem almost….historic? On top of perverse, I mean.
Konstantinos Lagoudakis, the mayor of Malia, a northern coastal town on Crete, described the vacationing British youths as follows: “They scream, they sing, they fall down, they take their clothes off, they cross-dress, they vomit. It is only the British people — not the Germans or the French.”

“You make that sound, Keith…I can do the same to you, okay? That’s what I thought…all right? And I said it.” — Chris Matthews to Keith Olbermann during yesterday’s discussion about the Hillary Clinton speech (which hadn’t been delivered at that point).

This morning a Huffington Post person described it thusly:
“Discussing Hillary Clinton’s upcoming speech, Matthews began talking about women ‘s reactions to Hillary. His producers, likely wary of any more cries of sexism against the host and the network, presumably tried to get him to wrap, as he said, ‘I’ll wrap in a second, I’ll wrap in a second.’
“Olbermann then tried to attribute Matthews’ point about women voters to Rachel Maddow, to which Matthews said, ‘Good ideas can be shared.’
“Then, when introducing Steny Hoyer, Olbermann mocked Matthews for ‘[going] off at the mouth’ and made a hand gesture implying that Matthews talked forever.
“‘You make that sound, Keith,’ Matthews said. ‘”I can do the same to you, okay? That’s what I thought…all right? That’s what I thought. And I said it.'”

An excerpt from a panel discussion about the views of the rural anti-Obama contingent expected to vote in the coming election. No, seriously — name the actor and the movie. No hints. Okay, one — the film is famous and respected.

I’ll always love Steven Soderbergh‘s Che. I’ll be seeing it again at the Toronto Film Festival, which starts eight days hence. I’ll be re-reviewing it when it opens theatrically. I’ll buy the DVD some day. But the people behind the 100% non-existent press reach-out for Che have an odd Toronto attitude. By any basic rulebook, producers Laura Bickford and Benicio del Toro and French financier/sales agent Wild Bunch should be pushing their movie in Toronto, and they’re really not doing that. Certainly not as we speak. 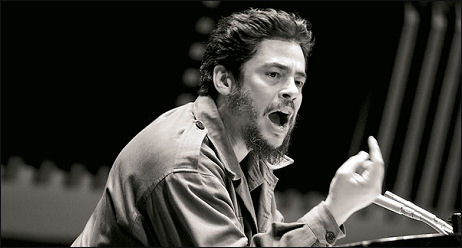 Right now, every moderately-funded film going to Toronto has hired a p.r. outfit and is doing what it can right now to stir press interest and get some festival traction…except Che. It’s beyond bizarre. It’s like they have some kind of death wish.
Soderbergh’s fine, historic and domestically un-sold film is showing in Toronto at the end of next week and nobody, it seems, is repping it p.r.-wise, nobody can tell me anything about how to set up chats or even photo ops with del Toro or Soderbergh in Toronto, and nobody — not Benicio’s publicist Robin Baum, not the folks at 42 West, not the Toronto Film Festival press office — seems to know who’s minding the store or what the plan might be.
Every year dozens of mediocre movies go to Toronto with p.r. companies fully hired, interviews being scheduled, parties scheduled and so on. And yet Che, a brilliant, ahead-of-the-curve, thinking-person’s epic, is doing nothing along these lines.
I really love Che. I think it’s rich, wonderfully believable, profound. I’ve written about Peter Buchman‘s scripts early on, about the Cannes showings, etc. Trying to do what I can to spread the word because I believe and I care and I want to see it get at least a decent reception when it opens in whatever form or format. And yet Bickford and Wild Bunch and del Toro have shown all the approachability and reaching-out that one might expect from Columbian drug dealers looking to hide news of their latest shipment.
What’s going on, for God’s sake? 42 West may finally be signed, apparently, and a Canadian publicist may have been approached or hired for Canadian press but who waits until only a few days before the start of the Toronto Film Festival to hire a publicist? 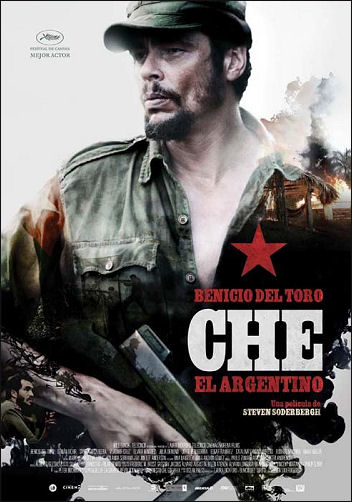 It’s as if the Che team got together a few weeks ago and said, “Okay, what can we do to make it seem as if we have a serious leave-us-alone attitude problem? No p.r. reps hired — check. No reaching out to press — check. No scheduled one-on-ones, photos ops or round-tables — check. No parties — check. No communication to press through intermediaries of any kind — check.”
The Che gang pulled the same thing before Cannes — no p.r., no reach-outs, leave us alone, etc. Who operates like this? Who makes a near-great movie, submits it to a major festival and does everything they can to create a muted reception?
I hope Che wins more film-critic fans during the Toronto Film Festival. I hope it opens commercially some day. Or if not theatrically, I hope at least it will get shown on HBO. I’ll be seeing it a second time in Toronto because I want to re-immerse. But I’ve pretty much given up as far as trying to help. If the Che forces want to say “well, we were just about to make a Toronto move but Jeffrey Wells flew off the handle,” fine. Because I haven’t flown off the handle. I’ve called, e-mailed, reached out and waited for a reply with the patience of Job for many, many weeks.
I’ve had it. I quit. Life is short and I don’t care any more.