6 Comments
Return of a Classic

For all those intending to see Steven Soderbergh‘s Che at either the Toronto or New York film festivals, here‘s a chance to see Richard Fleischer‘s Che! (1969), a famously loathed exploitation pic from 20th Century Fox with Omar Sharif as Che Guevara and Jack Palance as Fidel Castro. For free, I mean. 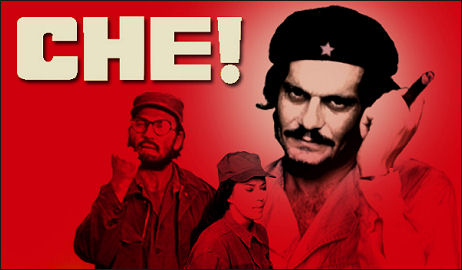 Sample line of Che dialogue, spoken by Sharif: “The peasant is like a wild flower in the forest, and the revolutionary like a bee. Neither can survive or propogate without the other. There is one essential difference between us and bees, however. In this hive, I will not tolerate drones!”

“While there was no sign that her formal nomination this week was in jeopardy, the questions swirling around [Sarah] Palin on the first day of the Republican National Convention, already disrupted by Hurricane Gustav, brought anxiety to Republicans who worried that Democrats would use the selection of Ms. Palin to question John McCain‘s judgment and his ability to make crucial decisions.
“‘They didn’t seriously consider [Palin] until four or five days from the time she was picked, before she was asked, maybe the Thursday or Friday before,’ said a Republican close to the campaign. ‘This was really kind of rushed at the end, because John didn’t get what he wanted. He wanted to do Joe Liberman or Tom Ridge.'” — from Elizabeth Bumiller‘s 9.1 N.Y. Times article, “Disclosures on Palin Raise Questions on Vetting Process.”
And look at all the stories dogging Palin on her special Huffington Post page.

Here‘s to the late, great Barnard Hughes, whenever or however you may find him.

Jett’s first London photo arrived a few minutes ago. He’s just starting a term at Syracuse University’s London annex, two or three blocks southeast of Russell Square. My first comment/reply after I first saw it: “You were in the Paul McCartney position (i.e., third in line), so you should have done it barefoot and carried a cigarette!” 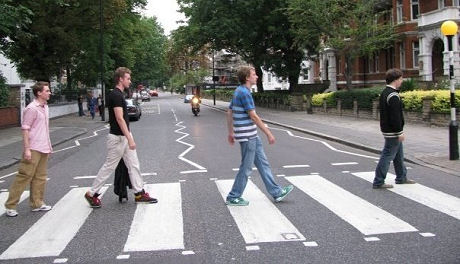 From the looks of this dead caribou, it looks like crackshot Sarah Palin shot him right in the mouth, or at least in the neck. I wish my two boys were toddlers again so I could teach them about the joy of killing large grazing animals. If you can’t slay wild beasts and then string ’em up and gut their warm bellies with a hunting knife, what kind of stand-up, free-thinking American are you? 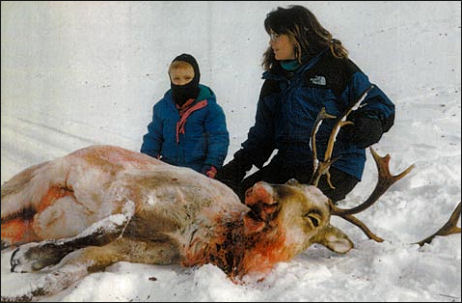 It looks like the big guy bled in a few places before leaving the realm. Did Palin take him down with a single shot, or did she riddle him with automatic fire from an AR-15, just to make sure?

The guy playing the bald, bespectacled movie-poster designer is fairly convincing, except for the breakdown part at the end.

Enough with the all-Gustav, all-the-time coverage from the cable news channels. It’s not Katrina, New Orleans has been spared a second disaster and there’s no real story except for video of water splashing over the levee walls on the Grand Canal. It’s just a big ferocious storm that’s causing some minor flooding and blowing over a lot of trees. If Katrina had never happened the news channels would be breaking into regular programming with occasional updates and bulletins when necessary…at most.
“Storm weakens to a Category 1 hurricane as it moves over Louisiana,” says the current MSNBC headline. “Water sloshes over some levees, but officials expect them to hold.” It’s over, drop it, back to Sarah Palin.

There’s a story up today about Russell Crowe, 44, thinking about accepting a second-banana role as Dr. Watson in Guy Ritchie‘s Sherlock Holmes, subordinate to star Robert Downey, Jr. If true, it simply means that Crowe has moved into that 40-plus phase in which a top-dog actor figures (a) “if I like the part, I like the part” and (b) “I don’t have to be the big star every time out.”
Jack Nicholson went through the same thing in the early ’80s (when he was also in his mid 40s) when he took supporting roles in Reds and Terms of Endearment.
A few minutes ago I mistyped the title of the Ritchie film as Sherlock Homie — and the instant I did that it hit me that this would be a much better vehicle for Richie and Warner Bros. than a Baker Street period piece with the hat and the pipe. We all know Ritchie isn’t going to respect the trappings of the original Arthur Conan Doyle character, so why even go there? But a brilliant modern-day London detective with perhaps an old-fashioned sense of reserve and decorum going up against the malignant criminal animals who’ve appeared in previous Ritchie films? That I would pay to see! Especially with Downey.
I’m not talking about a comedy or satire but a simple conceptual updating. Today’s under-25 mongrel moviegoing culture doesn’t want to know from 19th Century London. They don’t want to know about anything except eating popcorn, copping feels and scratching their balls during the trailers.
Making Sherlock Homie would also get Warner Bros. out of the duelling Sherlock Holmes movie situation it now finds itself in with Columbia, producer Judd Apatow, Sasha Baron Cohen and Will Ferrell.
I wrote Daily Mail columnst Baz Bamigboye whether he’s heard about the Russell Crowe casting, and he replied as follows: “I have no clue. If I have any energy left I might pop into Guy Ritchie’s film party later tonight and ask him.”

“Driven by fantastic energy and a torrent of vivid images of India old and new, Slumdog Millionaire is a blast,” says Variety‘s Todd McCarthy, finally posting from Telluride this morning at 9:49 am after catching pic on Saturday. “Danny Boyle‘s film uses the dilemma of a poor teenager suspected of cheating on the local version of ‘Who Wants to Be a Millionaire’ to tell a story of social mobility that is positively Dickensian in its attention to detail and the extremes of poverty and wealth within a culture.
“Originally a Warner Independent title, the picture has just been acquired by Fox Searchlight for release in the U.S., where it will open at Thanksgiving, although Warner Bros. retains an interest. Tasty item looks to catch on in a big way with young, adventurous and merely curious viewers in wide specialized release.”
Yeah, but as “btwnproductions” sardonically wrote last night, Slumdog Millionaire seems “kind of foreign.” Don’t kid yourself that red-state audiences won’t be muttering this sentiment to each other once the Slumdog roll-out begins.
Still nothing from L.A. Weekly critic Scott Foundas.