“Based on a Western novel by Robert B. Parker, the Appaloosa story is so old it’s practically got tumbleweeds blowing through it,” writes Newark Star-Ledger critic Stephen J. Whitty in a 9.6 profile of director-star Ed Harris. “Small town, terrorized by a lawless land baron, hires two gunmen to clean things up. There are a couple of gunfights, a raid on a train and, for good measure, a piano-playing lady who may or may not have a heart of gold.
“Except that, although it does have a couple of strong sequences, most of the action in Appaloosa is fast and fatal — less like the drawn-out sequences of a Sergio Leone film, and more like those `50s samurai flicks in which an entire room is left skewered in seconds. And much of the drama comes from the characters themselves.”

Four nights ago in Los Angeles, before the start of a press screening of The Women, I spoke with some guys ((three guys and a girl, to be precise) from a well-read movie site. The Toronto Film Festival came up, and they told me straight off they wouldn’t be going. One of them half-joked that “we might go if they showed more super-hero movies there.” Funny line, chuckles all around.
But I found myself thinking the next day about the xenophobic mentality of super-hero, super-CG fan boys. Half-joking means you’re being half-serious, of course, and what’s the difference between saying the above and some conservative movie critic saying he/she would be more inclined to go Toronto if they were to show more films about God, faith and Christianity? Talk about living in a segregated, heavy-fortified world.

In a Political Animal entry dated 9.6, Hilzoy says that “one thing that struck me [about John McCain‘s acceptance speech two nights ago] was the irony of a candidate who relentlessly positions himself as a selfless servant of the nation (‘I wasn’t my own man anymore — I was my country’s’), and then allocates such a large share of his convention speech to talking about himself.
“I can understand the need for Sarah Palin to dedicate time in her speech to introduce herself to the nation, given that she was an unknown quantity on the political scene at that point (notwithstanding the frenzy of Google searches over the last seven days). But at 72, after a long career in Washington, after a widely-televised campaign, and at the end of a convention in which an entire day had been dedicated to answering the ‘who is John McCain?’ question, it seems a little unusual for McCain to use his most precious block of national TV airtime to essentially read aloud from his memoirs, saying comparatively little about the country or about his platform.
“Here is an admittedly simplistic way of looking at it based on analysis of the full transcript of the speech found on his campaign website. There were a total of 271 sentences in the speech, not including the ‘thankyouthankyouthankyouallsomuchthankyou’ before he started and the ‘joinmejoinmefightwithmejoinmefightwithme’ bit in the final minute or so.
“Of those 271 sentences, a remarkable 147 (54%) were devoted to telling us about John McCain himself: his past accomplishments (‘I fought crooked deals in the Pentagon’), his qualifications for the job (‘I know how the world works’), his family and childhood (‘When I was five years old, a car pulled up in front of our house…’), his time as a POW (‘On an October morning, in the Gulf of Tonkin…’), his patriotism (‘My country saved me’), and so on.
“Another 8 sentences focused on Sarah Palin. This leaves only 116 sentences (43% of the speech) to discuss the topics that one might otherwise expect to constitute the majority of the speech: the state of the nation, his policy positions, future promises, differences between his positions and Obama’s, and so on.
“The contrast with Barack Obama‘s speech is pretty dramatic if you go back and review the transcript of both speeches. Obama dwells almost exclusively on the realm of the state of the country, the future, what America is all about, key components of the platform, etc — only occasionally sprinkling in comments about himself and his family that help to provide context and credibility.
“Using a similar analysis of the 226 sentences in the speech, 35 are devoted to Obama himself and/or his family, or about 15% of the speech. More than a third of these came in a single section containing memories about his mother and grandparents (‘These are my heroes.’).”

I’ve been attending Toronto Film Festival parties for years, and I’ve learned never to come on time because the door goons always say “we’re not ready to let anyone in yet.” The rule of thumb is that you have to stand around for 10 or 15 minutes. And it’s quite rude. If I were to throw an event like this I wouldn’t dream of asking journalist guests, all of whom are on a fairly tight clock, to stand around like chumps trying to get into Studio 54. But the people who throw these events do this damn near every time.
The invitation for last night’s Burn After Reading party said 11 pm. Fool that I am, I timed my arrival so I was there precisely on time, as was MTV’s Josh Horowitz. After bitching and whining for five minutes we were asked (along with several others) to clear the sidewalk area, and then to please stand off to the side, and then to please stand further to the side so as to not block the adjacent driveway, and then to please stand next to the metal cattle fence to the other side of the entrance.
And then one of the goons said, “No cameras will be allowed inside.” For a second or two I considered saying something smart-assy, but wisdom prevailed. But at that point I was also berating myself for not acting like a man of true character and gravitas and walking away proud.
Once inside, however, the party was very nice. Cool climate, not too crowded, delectable Asian finger food, fetching waitresses, delicious junior-sized Cosmopolitans. Horowitz and I spoke for a short while to the great Richard Jenkins (a serious Oscar hopeful for his performance in The Visitor), and also to Ethan Coen. But for the most part journalists talked to journalists and talent — Joel Coen, John Malkovich., Frances McDormand, Tilda Swinton — talked to talent (and to producers, managers and agents).
I’ve taken photos at these events before and it was no big deal, but a little voice told me not to. I think it was mainly because of the white-haired, tuxedo-wearing Malkovich, whom I’m afraid of because of his intensity or something. I noticed that McDormand (who looked great) had her hand touching her cheek and chin a lot — a sign of boredom and/or slight discomfort.

At last night’s the Coen Bros./Burn After Reading party I asked a journo pal who’s seen Spike Lee‘s Miracle at St. Anna if it really needed to be 166 minutes. (Some movies, like Steven Soderbergh‘s 260-minute Che or Sidney Lumet‘s 168-minute Prince of the City, really need long running times to achieve the goals they’ve set out to achieve.) And the guy said no, it doesn’t. Spike’s tendency to over-underline is in full force here, he said.
Then I spoke this morning to another journo who’s seen it also, and he said the same thing: “It should have been two hours at most, and it’s not that good to begin with.” I’m still looking forward to this World War II/Tuscany/little kid movie — all Spike Lee joints command my attention — but these two comments were why I passed on today’s showing and went off to write instead. You have to make calls like this all the time during a festival of this size and scope. The question isn’t “is it any good or not?” but “does it absolutely have to be seen here?”

It’s been an awful tech day and basically a black bummer all around, leaving me in the foulest of moods. I wrote my review of Slumdog Millionaire in the lobby of the Four Seasons hotel between noon and 2 pm, but the temporary online provider (Wayport, $15 bucks per day, bad news) killed the connection twice, and the second time my review, an 80% positive thing that was very tight and well-phrased, was lost when I tried to save it. (I have this unwise habit of composing on Movable Type.)
Then I saw Gomorrah, an Italian crime film which was as solid and raw and convincing as I’d been told. So that was satisfying, although I was still smarting from the loss of that Slumdog piece. Damn Wayport to hell.
Then I went over to the Starbucks at the Manulife Center (my office, more or less, with only one available wall plug) and was unable to log onto my MT 4.0 composing software via HE’s new Canadian server, LFC Hosting, due to some kind of blockage or viral whatsis that came, I suspect, from Wayport. I restarted three or four times, dumped cache and cookies…nothing. I have a backup computer with me, but the day has been a near-total wash in terms of filing.
I’ve been invited to re-examine the new Blindness and then come to the after-party at 11 pm, but I feel so dispirited all I feel like doing is grabbing some hot food in Chinatown and then heading back to the pad for some CNN or TCM. Zone out and forget everything.

The Venice Film Festival has handed the Golden Lion award to Darren Aronofsky‘s The Wrestler. It would obviously have been a nice double-whammy if they’d given the Best Actor prize to comeback kid Mickey Rourke, whose lead performance in Aronofsky’s film was strongly praised here and there. (The Wrestler will screen for TIFF press on Monday.) The only other English-speaking winner was Jennifer Lawrence, who won the Marcello Mastroianni Award for Best Young Actor or Actress for her performance in Guillermo Arriaga‘s The Burning Plain.

AICN’s Dr. Hfuhruhurr, a card-carrying Reagan conservative, has posted a positive review of David Zucker‘s An American Carol, a reportedly broad anti-left satire about the transformation of a Michael Moore-like documentarian in the manner of Ebenezer Scrooge’s awakening in A Christmas Carol.
In the review Hfuhruhurr briefly calls yours truly a paragon of intolerance because I’ve posted some snarky but accurate items about the film and because I vented a brief flash of anger at Jon Voight when he wrote a stunningly ignorant anti-Obama editorial in the Washington Times a few weeks back.
Hfuhruhurr can bloviate all he wants (he’s a good snappy writer), but in this instance he sounds very much like a propagandist — a right-wing advocate who’s carrying water for a fired-up, hypocrisy-poisoned community that worships the Glenn Becks and Sarah Palins of the world — and somewhat less of a serious movie guy.
Today’s rabid righties are not guided by the principles of loyal opposition and all that — they’re hammerhead dogma-spewers of the lowest order. Contrarians, dogs, takedown artists. As Jon Stewart said (and I’m paraphrasing), “If Barack Obama was to discover the cure for cancer, they’d find a way to spin it negatively.” They’re not on the “wrong side” as much as the fact that they’re animals. Seriously. No offense.
I’ve been told by people I know and trust (to the extent that if Zucker’s film had anything going for it, they would acknowledge that rather than dismiss it on an ideological basis) that An American Carol is fall-on-the-floor, Burn Hollywood Burn bad..

The Burning Plan director-writer Guillermo Arriaga following last night’s screening of his film at Toronto’s Winter Garden theatre. I was supposed to chat with him after the screening, but a last-minute addition of a q & a with the audience delayed everything, and I had to be at the Coen brothers/Burn After Reading party at 11 pm, so I decided to record a portion of the q & a and take some shots, three of which came out nicely. 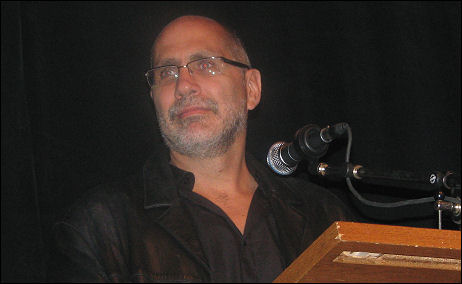 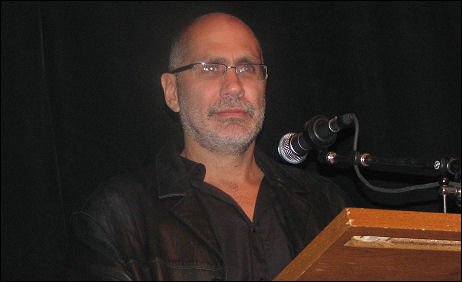 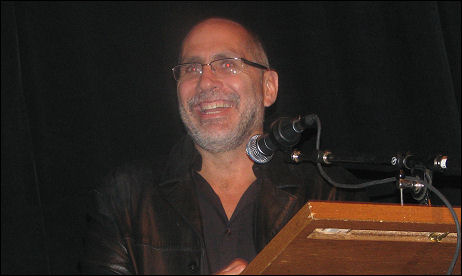