Support on Patreon Follow @wellshwood
12 Comments
In For A Few 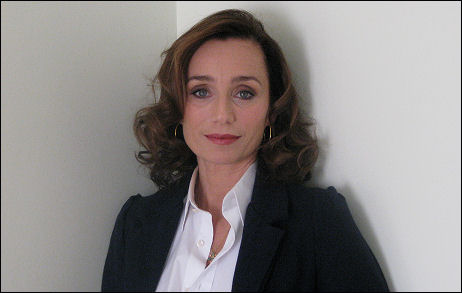 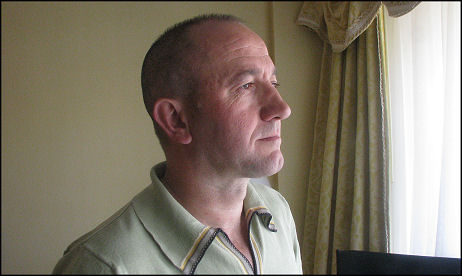 Footage of this sort would never be included in a major film today. Sexist, objectifying, poolside porn-drivel. Certainly not with a major star. The internet (that’s right, no capital “I”) has cornered the titillation market. A scene of this sort, which feels even more ridiculous due to that idiotic reaction from Phil Silvers, feels as removed from ’08 as a 1930s Busby Berkeley musical number.

I don’t consider Quentin Tarantino‘s decision to add Julie Dreyfus, Michael Bacall and Omar Doom to the cast of Inglorious Bastards to be hot news. But the poster that accompanied the original Playlist story is cool. Obviously meant to look like a Nazi souvenir that’s been sitting in some World War II vet’s attic for the last 60 years. 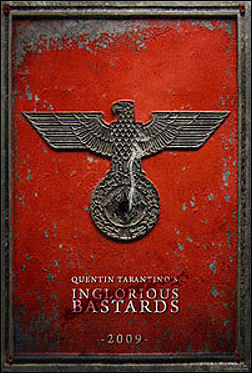 With Wrestler star Mickey Rourke talking these days about how his career went plop into the toilet in the ’90s, I found this Entertainment Weekly piece I filed from the ’92 Cannes Film Festival interesting. It was just a few days after the L.A. riots when I came across a Rourke quote about those he felt were responsible. A few hours later I ran into Spike Lee at a party, showed him the clipping, and he grabbed my tape recorder and said what he said. 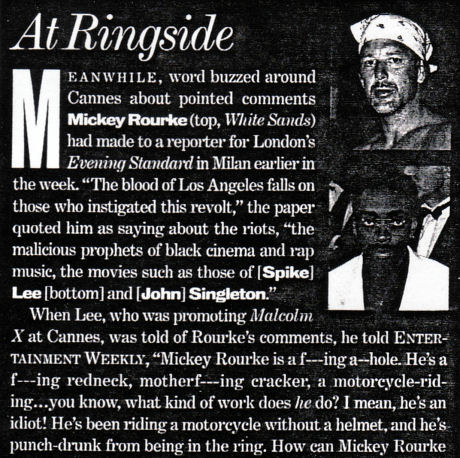 You are not a true film person unless you know what CRM-114 means — what film it’s from, what its function was, who first mentions it, etc. 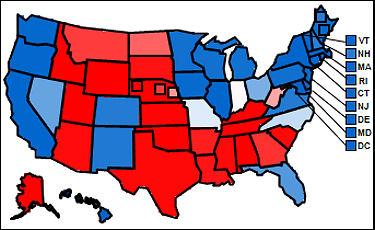 Jamie Stuart again grapples with existential conundrums, an unfaithful (or at the very least weak and malleable) woman, phantom creeps on the street and other stuff that feels a little too poised and over-considered. Sooner or later all artists accept the fact that an orange is an orange is an orange.
And oh yeah, Wrestler star Mickey Rourke talking about his movie-career detour is cut into all this.
Here’s a flattering assessment of Stuart and his work by the Washington Post‘s Ann Hornaday, posted yesterday.
I love the brief Mac screen shot of an entry or password code: “CRM-114.” You are not a true film person unless you know what CRM-114 means — what film it’s from, what its function was, who first mentions it, etc.
“You think people are stupid and don’t pay attention today? You should see it fifty years from now.”

Marlon Brando out-gunning Karl Malden at the end of One-Eyed Jacks is, by my yardstick, the second most satisfying drilling of a bad guy in the history of westerns. (The most satisfying is still Alan Ladd pulling faster than Jack Palance in Shane, and the third most satisfying is Kevin Costner and Robert Duvall ‘s third-act triumph in Open Range.)

It’s a shame that One-Eyed Jacks, which was issued on a decent-looking laser disc in the ’90s, is available only on crummy-looking public domain DVDs these days. Charles Lang‘s cinematography is vivid and striking and handsomely framed, and Monterey’s turbulent seaside backdrops give the film a grand and painterly distinction. It seems to be in need of a Robert Harris restoration (if the original elements haven’t been lost).
In March 2007, Moon in the Gutter’s Jeremy Richey wrote of the power in the shot in One-Eyed Jacks when Brando’s Rio realizes Karl Malden’s Dad “has betrayed him. He’s alone on top of a hill and a dust storm is developing around him, the wind is blowing and we see him looking and then we see the realization on his face that he’s been left behind. It is one of the loneliest and most isolating moments in all of American cinema.”
Richey’s piece was later re-run by Amplifier in early ’08 — here‘s a link.
The only film directed by Brando, One-Eyed Jacks “has been hailed by Martin Scorsese and Quentin Tarantino,” he wrote, “one that signaled the rise of a more violent and cynical cinema, but for some reason it’s never really gotten its due.
“The main reason for its continuing dismissal in some circles is that it remains a compromised film. After a gruelling six months worth of shooting Brando either ran out of steam while editing, or the film was finally just taken away from him or most likely, both. It is known for sure that Brando’s original five hour cut was whittled down to the 141 minutes we have now, and the incredibly bleak ending (Pina Pellicer being shot and killed by Karl Malden during the final gun battle) was changed. 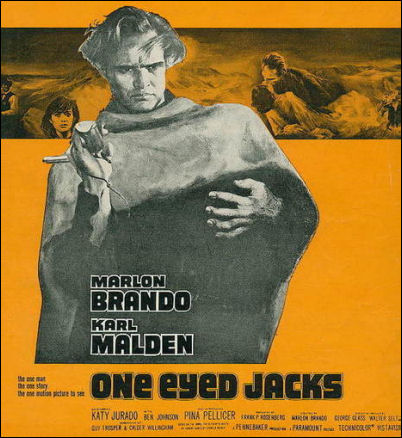 “Even in it’s compromised state One-Eyed Jacks remains a visionary film and a totally unique one. It’s impact can be felt in the American Westerns that followed by Sam Peckinpah, Monte Hellman and Arthur Penn; and also in the European westerns that would gain prominence just a few years later.
“One-Eyed Jacks seems like a clear precursor not only to Sergio Leone but to a breed of mystical European Westerns like Sergio Corbucci‘s The Grand Silence and Enzo Castellari‘s Keoma.”
I love this scene between Brando and Timothy Carey. A crude racist drunk, Carey is beaten up by Brando for treating a Latino woman with cruelty and brutality, and then is shot three times when he tries to plug Brando with a shotgun. Best line: “You get up now, you big tubba guts!” Second best line: the bartender saying “Mister, you really killed him,” to which Brando shrugs with a guttural “aawww,” as if to say, “Hey, that’s my style — three shots in the chest, take it or leave it.”