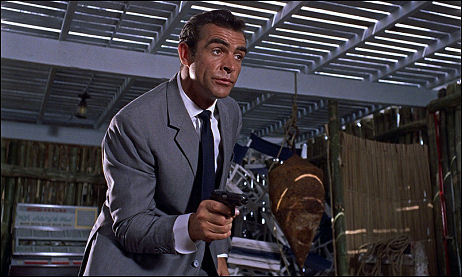 In a chat last night with Boedker, West said “I have a great deal of respect for [Biden]. I have a great deal of respect for Sen. Obama. We are given four minutes of a satellite window for these interviews. Four precious minutes. I got right down to it and, yes, I think I asked him some pointed questions. These are questions that are rolling about right now and questions that need to be asked. I don’t think I was rude or inconsiderate to him. I think I was probing and maybe tough.
“I can’t believe that in all of his years in politics, and all of his campaigning and such, that he hasn’t run into some tough questions before. He’s certainly up to it in giving good answers.”
Obama-Biden campagin’s Florida spokesperson Adrianne Marsh said that West’s questions made clear she was “woefully uninformed about simple facts.”
Biden did himself proud, yes, but West is fooling no one. This pinched harridan was mouthing Republican attack points, plain and simple, and revealing no interest whatsoever in impartial journalistic inquiry. She may sit behind a TV news desk wearing a nice suit, but she is at one with the zanies from Henderson, Nevada and with the likes of evangelical right-wing Minnesota congressperson Michele Bachmann.

“There is one thing I can do as well as ever — I can write,” Roger Ebert said yesterday. “When I am writing my problems become invisible and I am the same person I always was. All is well. I am as I should be.
“After my first stretch in the Rehabilitation Institute of Chicago, I began to write again, a little. After my second, I returned to a nearly normal schedule. This spring during my third rehab, I was able to log onto a wi-fi network and begin writing much more. This year, which has included two major surgeries, I have so far written 170 reviews, 22 Answer Man columns, 28 Great Movie essays (not all yet published), and 37 blog entries.
“In May, I began to sense a change going on. At first it was subjective. This autumn it has become undeniable. My writing has improved.
“By that I don’t mean it’s objectively better from the reader’s point of view. I mean it has expanded within my mind, reaches deeper, emerges more clearly, is more satisfactory. Sometimes I glory in it — not the quality of the prose, but the quality of the experience. I find myself writing more, because I will return to that zone longer.
“I take dictation from that place within my mind that knows what to say. I think most good writers do. There is no such thing as waiting for inspiration. The idea of ‘diagramming’ an essay in advance, as we are taught in school, may be useful to students but is foolishness for any practicing writer. The Muse visits during the process of creation, not before.”

After predicting a weekend gross between $35 and $38 million on 10.22, Fantasy Moguls’ Steve Mason is now reporting a projected 3-day haul in the region of $55 million for High School Musical 3. Saw V is looking at $29 million, give or take. Gavin O’Connor‘s Pride and Glory is looking at $6 million.

In a surprisingly scathing pan of Clint Eastwood’s Changeling, New Republic senior editor Christopher Orr has called it “not merely a contender for the worst film of the year, but a contender for the worst domestic tragedy, the worst conspiracy thriller, the worst serial killer flick, and the worst courtroom drama. It is that rare movie which, long after you think it’s exhausted the possibilities, keeps discovering new ways to fail.”
Except it’s very well handled, all of a piece, believably “period,” an “Eastwood film,” a nicely grounded cruise-a-long. You can feel the hand of a guy who knows how to do this, even if he’s not exactly at the peak of his game in this instance. I felt, in other words, no major discomfort when I saw it last May at the Cannes Film Festival, but I was also convinced that it’s not top-drawer Eastwood. Nobody anywhere thinks that. And yet it’s quite passable. It may be off-balance or under-done or imprecise in this or that way, but it’s never painful.

There’s some kind of injection software that allows the creator (or the sender) to pop anyone’s name into this video. Re-name and send to friends. Thanks to HE reader “Pete” for pushing it my way.

Frontunners is a smart, engaging, tightly cut doc about four Stuyvesant High School candidates running for the ceremonial title of president and vice-president of the Student Union in this elite Manhattan school, in 2006. I liked it for the same reasons everyone else is standing by it. Because it’s brisk, well-shaped, thoughtful, catchy and echo-y in a sense that the campaign issues and tactics are somewhat similar to some of the ones that are now playing out on the national stage. 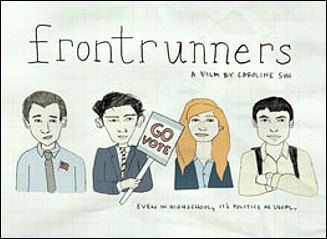 Here‘s the trailer.
I did an 18-minute phoner yesterday with Frontrunners producer Erika Frankel, who was on a train to Boston at the time along with the director, Caroline Suh. (Whom I didn’t have time to speak with — sorry.) My Time Warner land line stopped working yesterday so I recorded off the iPhone.
I especially responded to the full believable-ness of Frontunners. I bought every frame of it, in part because there’s no hint or trace of American Teen-style showbiz slickery. I also warmed to it, I suppose, because the candidates are all the age of my younger son Dylan, who was born in ’89.
Following its 10.15 debut at Manhattan’s Film Forum, Frontunners opened in a few new cities yesterday — Los Angeles, Boston, San Francisco, etc.

In her recently televised interview with NBC’s Brian Williams, Sarah Palin pronounced the embattled country where over 4,000 American troops have died as “Eye-rack.” It’s Ehrahq, you moron. And if you want to ape the way the locals say it, it’s Uhrahq. (Or at least, that’s what an Italian director told me a couple of years ago.) I have no tolerance for people who say Eyetalian either. Saying eye-anything is like having a tattoo across your forehead that says “yokel.”

For what it’s worth, this columnist feels very badly for the traumatic loss suffered by poor Jennifer Hudson. A hug, a pat on the back, I’m sorry, life can be brutal and savage, hang in there.

Here, also, is a three-day-old Las Vegas Sun high-def video of enraged McCain supporters (older, grayer, thicker, Supercut hair) shouting down Obama supporters. Except it takes way too long to load. The situation indicated by the just-out Newsweek poll — 53 Obama to 40 McCain among registered, 53 percent to 41 among likely voters — is surely goading the angry McCainers.