Vanity Fair‘s Julian Sancton has assembled a jukebox sampler of 11 movie-music clips, and after listening to most of them (I refuse to sample David Hirtschfelder‘s Australia music) it finally hit me why I’ve been so taken with Revolutionary Road all this time. Thomas Newman‘s score is so moving in its sadness and simplicity, so finely woven into the mood of the film (and vice versa) that it’s like a character unto itself.

I’ve noted previously that the “air” in Southbury, Connecticut, is awful. It’s more or less the dark side of the moon. One of the few commercial establishments with any kind of tangible semi-reliable wi-fi is a just-opened Borders in the main shopping center, which is where I’m sitting now. But not for long. Within minutes I’ll be submerged in the black hole of The Watermark, the retirement community where my mom lives. 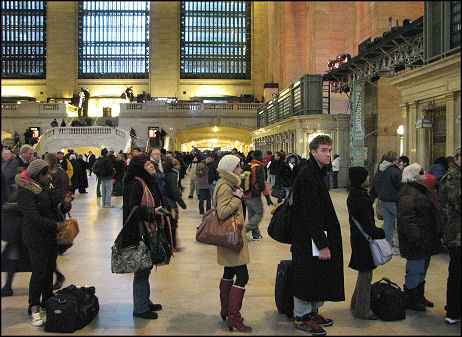 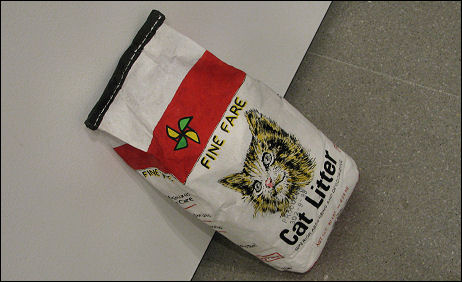 Object d’art at Museum of Modern Art…seriously. Located on a second or third-floor gallery, just leaning against the wall. 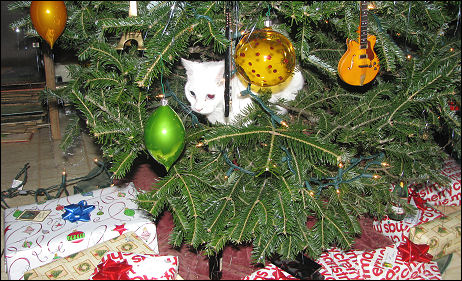 Getting on a train up to Connecticut, and then driving up to Northern Siberia, New York — i.e., west of Rochester — tomorrow. It’s going to be a howling frozen hell with lots of boredom thrown in, and too many calories. As an exercise, I’m going to take a picture of something on the way into Grand Central and post it from the moving train, using the AT&T Air Card.

Original Post: During a round-table Doubt interview Meryl Streep confirmed that she’s starring in Nancy Meyers‘ upcoming movie with Alec Baldwin and Steve Martin, and provided Collider‘s Steve Weintraub (among others) with a synopsis:

“It’s a kind of a…it’s a comedy, but it has a little basis in something very real and a dilemma that people meet at a certain age. This is about a divorced couple. They have been divorced for ten years and they have three grown children in their 20s. The youngest is graduating from college. And he has moved on. He has gotten a young wife, and is embarking on his toddler marriage, new family and she hasn’t really had a boyfriend in a long time. And she just meets somebody interesting just before the graduation.”

Note: I worship Baldwin’s wit and bile, but when you play someone in a romantic situation you need to get on the treadmill and slim down and “young up” a bit — you can’t look like a middle-aged side of bloviating beef.

“She goes to the graduation,” Streep continues, “her ex-husband is there, they meet in the bar, they have a few drinks, they start dancing and he’s re-smitten. And it’s not clear if [this situation] is exacerbated by the presence of this other man in her life for the first time. And that’s what it’s about. And all the kids are very happy that everyone is together again, but it’s about ‘has the ship sailed at some point.’ When you have a big-shared history with somebody, but you have a big break, what do you retain from that? And is it possible to fall in love again. So, that’s what it’s about. It’s sweet. It’s cool.”

Trust me — the re-smitten thing on the part of ex-husband is at least partly a competitive, put-the-new-guy-in-his-place, show-him-who’s-boss type of thing. Anyone with a semblance of over-40 life experience knows that nostalgia sex is…well, some have gone there, but you can’t go home again and that’s that.

If you want something you need to say to yourself “I want this thing,” and then you have to make the moves. Outside of the realm of royalty, nothing is handed to anyone on a silver platter. And if you’ve (a) cumulatively earned your laurels, as Kate Winslet clearly has, and (b) delivered a phenomenally sad and searing performance, as Winslet has in Revolutionary Road , then you’re entitled to stand up and do what you need to do. 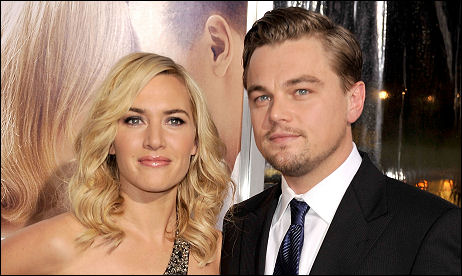 The following was posted five days ago — five days ago! — on gofugyourself. The dialogue isn’t grade-A, but some of it isn’t bad.

Leo: I won’t let it happen.

Kate: Nineteen tries. It took her nineteen tries to win the Daytime Emmy. I’ve had eleven tries and I haven’t even won a fucking Globe. A Globe! They’re not even real awards.

The basic DNA of every bullshit CG fantasy action-mythology epic of the last 25 years is contained in this mock-trailer for Thundercats, and will be repeated again and again as long as bullshit CG fantasy action-mythology epics continue to be made. Brilliant career moves by Brad Pitt, Vin Diesel and Hugh Jackman, but who’s the actress under the makeup — Scarlett Johansson? I’ve only watched it once. (Congrats to WormyT, thanks to Jack Morrissey.)

The Wormy T guys are saying all the effects were done frame-by-frame in Photoshop, and that the footage was edited in Adobe Premiere.