Support on Patreon Follow @wellshwood
21 Comments
Jump On It

The Sundance situation has reversed and I’m now offering rather than looking. I’ve got a shared bedroom (two single beds, you get one) in a two-bedroom condo open for $125-something per night, on a seven-day basis starting Friday, 1.16. The condo has wi-fi, and sits high above (i.e., looks down upon) Park City’s Main Street. Hubba-hubba. 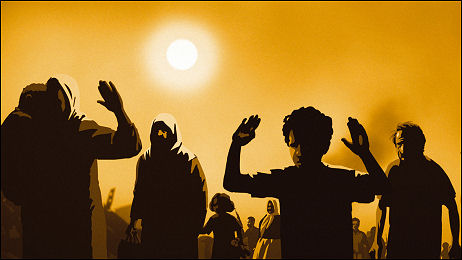 In Three Days of the Condor, Robert Redford‘s Joseph Turner has forced Faye Dunaway‘s Kathy Hale to miss a New England skiing rendezvous with her boyfriend and lie to him in the bargain. Now that they’re saying goodbye, Turner wonders how it’ll all play out when she finally goes north. Turner. Your boyfriend…he’s a tough guy? Hale : He’s pretty tough. Turner: What will he say? When you tell him what happened? Hale: (sighs) Understand, probably. Turner: Wow…that is tough. 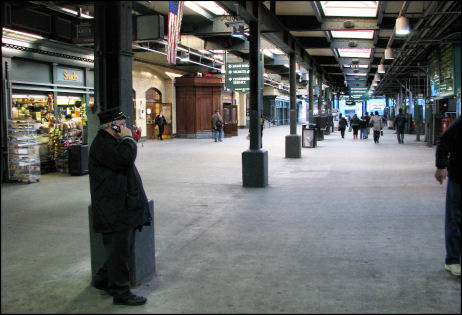 Hoboken’s Erie Lackawanna train terminal, used 33 years ago by director Sydney Pollack as backdrop setting for the farewell scene between Redford and Dunaway in Three Days of the Condor
January 3, 2009 4:45 pmby Jeffrey Wells

“As Hollywood faces grim times, there’s a silver lining for 2009,” writes Variety columnist Anne Thompson. “If the studios, God forbid, are forced by the credit crunch to make fewer, less expensive films and spend their own money producing them (as the L.A. Times reports in this grim forecast written before the SAG strike looked less likely), they will take less risks, yes, but they’ll also pay more attention to making strong commercial films with a market niche. In short, they will make better films.”

I agree but in a slightly different way. Having tons of money to burn has never upped the quality of creativity for anyone or anything, and having less money always results in more discipline and a lot of honing, which tends to result in better work. Martin Scorsese had loads of dough to work with on Gangs of New York and look what happened. And he was working on a relative shoestring when he made The Last Temptation of Christ and look what happened.

I was looking for a clip of the last two or three minutes of Patton, which ends with George C. Scott describing the victory procession of an ancient conqueror and concluding with the following: “A slave stood behind the conqueror holding a golden crown and whispering in his ear a warning that all glory is fleeting .” Those last four words make me gulp every time I hear them.

As a dad, I think I understand a bit of what John Travolta is feeling about the sudden death of his 16 year-old son Jett. It goes a bit beyond that, actually, with my oldest son having the same name. Travolta’s Jett was born in ’92, four years after mine. Jett wrote me yesterday saying “there’s now one less Jett in the world…feels weird to see my name in an obit.” My sympathies all around. This is awful.

3 Comments
Kid’s Got It

“For all the crap talk of ‘choice feminism’ — whatever the hell that means — we are never going to feminize the world. Women who want to succeed pretty much have to work as long and as hard as men typically do, and that’s that.

“What does Caroline Kennedy know of this hellishness? She hasn’t held a paid position since her children were born, nor did she have a proper job even before that.

“Kennedy is entering the political fray under exceptional circumstances: she’s a former First Daughter, and her family functions as American royalty. No other women with less-blue blood could even attempt to get away with what she seems to in fact be getting away with. This is not sexism; this is reality.” — author Elizabeth Wurtzel (“Prozac Nation”, “Bitch: In Praise of Difficult Women”, “More, Now, Again”) writing in the Daily Beast.

Inspired by Defiance, Ed Zwick‘s drama about the Nazi-fighting Jews of the forest (which isn’t half bad, by the way), Lewis Beale has written a 1.4 L.A. Times article about the receding of the Holocaust mentality and how that has allowed for the emergence of the scrappy, two-fisted, gun-totin’ Jewish fighter.

Author Rich Cohen (“Tough Jews”, “The Avengers”) tells Beale that “most European Jews died in the Holocaust, and [for a long while] that was the story. People felt the other side could be read as a criticism of those who died. The story of the Holocaust for Jews became holy over time, and for that reason, anything that muddied that story, there was no interest in it for a long time. But now there is. The image of Jews has changed.”

For some reason Beale doesn’t mention that half of Quentin Tarantino‘s upcoming Inglourious Basterds is about a band of raging Jewish G.I.s out to murder and scalp as many Germans as they can get their hands on during World War II. There’s a character named Donny Donowitz, a.k.a. “the Bear Jew” (played by Eli Roth) who carries around a baseball bat, looking to shatter German skulls and cause their brain matter to go glop on the cobblestones.

“I was a shy kid but a lot of my childhood was spent punching the bullies out,” Clint Eastwood tells an Esquire interviewer in an issue that was current during the Xmas break. “We live in more of a pussy generation now, where everybody’s become used to saying, ‘Well, how do we handle it psychologically?’ In those days, you just punched the bully back and duked it out. Even if the guy was older and could push you around, at least you were respected for fighting back, and you’d be left alone from then on.”

That’s a great paragraph and pure Eastwood. And he’s speaking the truth besides. Even if you get beat up as a result of fighting back the bullies will respect you and leave you alone after that. America machismo was built upon such childhood experiences.

But then Clint ruins the vibe when he says, “I don’t know if I can tell you exactly when the pussy generation started. Maybe when people started asking about the meaning of life.”

I’m pretty sure that people have been wondering about the meaning of life since the days of Socrates, Achilles, Pythagoras and Hepatitis, if not earlier. But the introspective American pussy generation Eastwood is wondering about was basically sired by affluence and living-room creature comforts starting in the early 1950s. The kickback lifestyle softened people up and made them susceptible to the mystical influences of the Beat generation that began in the late ’40s and ’50s, the serious rock ‘n’ rolling that began in the mid ’50s, the growth of a left-wing intellectual community to fight back the right-wing commie purges of the late ’40s and ’50s and the Curtis LeMay nutters in the military, the influence of liberal psychology and the Dr. Spock philosophy upon baby-boomer kids, the expansion of the U.S. economy in the ’60s and the increasing comforts that followed, the Beatles, the Kinks and the long-hair revolution that followed, pot and psychedelic drugs and rampant hippiedom…all of these things helped to pussify America.

And God help us if we hadn’t gone through all this. We’d be so brutish and Neanderthal that our culture would have ceased to function for its inability to relate to other cultures and values. I for one am glad for the pussy influence that helped shape who I am, but I also worship Eastwood’s steely machismo. I may even go see Gran Torino again when it opens next Friday, if only to savor the audience reaction. People get this film — it’s an audience pleaser — and they certainly get Clint.

Filmdrunk has posted a nice Harris and Klebold parody of the Eastwood mentality.

I drove through and around the New Jersey neighborhoods of my youth yesterday — Westfield, Clark, Rahway, Mountainside — and was mildly taken aback by the Christmas decorations still up everywhere. It was two days after the dawn of ’09 — time to take down the tree, put away the tree lights, grim up and get back to work — but New Jerseyans were hanging tough with the mistletoe and the candles in the windows and the sugarplum fairies, etc.