I didn’t see David Poland‘s very rough, blunt, hellfire-and-damnation piece about Deadline Hollywood Daily‘s Nikki Finke until today….sorry. He makes some good points; the writing is very clean and straight because he’s not hemming and hawing in the least. (He also throws in a belitting comment about yours truly in the process.) He’s not afraid of being Finke’s enemy, and I admire the ballsiness in that.

Then again he’s always been heavily into wearing robes and passing judgment. I know that when Rabbi Dave decides to unload on an enemy, deep down he’s mainly looking for one thing to happen (and I know because I’ve tasted it first-hand). He wants you to throw yourself on the temple steps and beg for forgiveness. If you can’t or won’t do that, or if you feel that life isn’t entirely a black-or-white, good-or-bad proposition, he wants you to quit journalism. I don’t think he wants his enemies to hang themselves, but he wouldn’t entirely mind it if they did.

That’s more or less the deal here . He wants his enemies fired, taken down, ruined, destitute, weeping. He’s an extremely bright guy and a very tough hombre, but he’s a fuming, finger-pointing purist. His is the hand that smiteth. 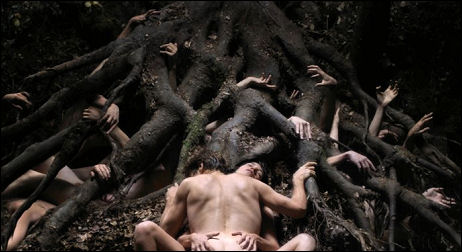 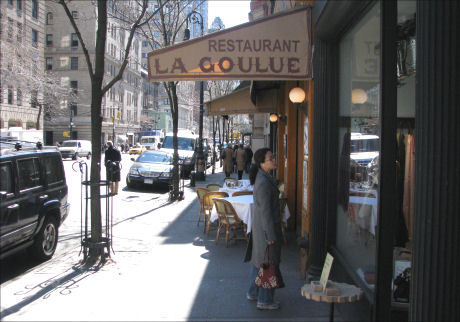 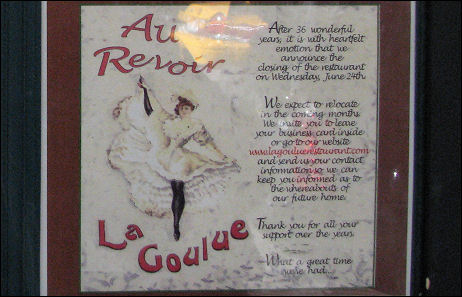 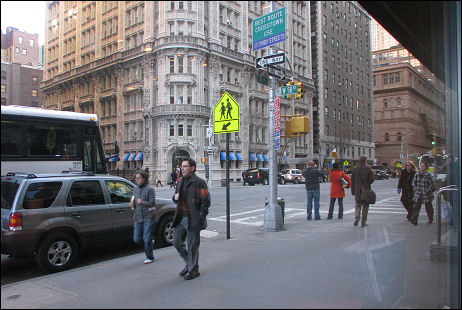 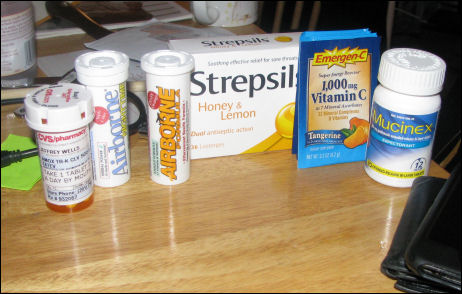 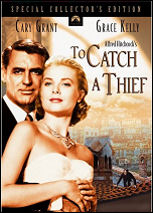 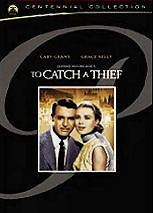 (l. to r.) The initial ’02 To Catch a Thief release; the ’07 Special Collectors editon, and the ’09 Special Centennial edition.

Which is why I’m about to buy my third DVD of the damn thing today. The latest upgrade is out and I have no choice.

The visual quality of the current Special Centennial edition is said by DVD Beaver’s GaryTooze to offer “a significant improvement over the 2007 edition with a higher bitrate and the rendering of colors is far superior with no hint of boosting as we saw in the [2007] SE.”

The first To Catch a Thief DVD, which came out on 11.5.02, was thought even back then to be somewhere between nothing special and somewhat crappy. It made Burks’ large-format photography look like it was captured on regular 35mm.

Nearly five years later, on 5.8.07, came the To Catch a Thief Special Collectors Edition, which added (or restored) a strong greenish tint to the nighttime rooftop scenes, and looked truly exceptional when played on a Bluray player and shown on a decent-sized high-def screen. I was blown away when I looked at this version on my just-purchased Bluray player and 42″ plasma screen last November. It almost flirts with Bluray quality in certain scenes.

And now — today — comes the To Catch a Thief Centennial Collection version, which reportedly delivers an improvement over the ’07 release and therefore an even more choice experience for guys like myself. The stills I’ve seen indicate color that is slightly less (the greenish rooftop efect is toned down) and more natural looking. 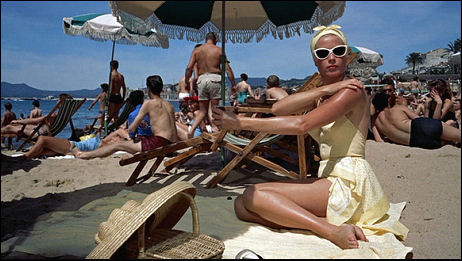 “By placing the film on one disc without any extra the compression has improved and even detail has advanced a notch,” Tooze has written. “The softer palette suits the film very well and it has a warmth that was devoid in the previous editions. Aside from seeing this in Blu-ray, this is fabulous news.”

This is perhaps the most significant divider between serious film lovers and people who just like movies. The former will always buy (not rent) the latest upgrade of this or that movie in order to have the finest rendering in order to simply look at the fucker — i.e., to sink into the visual bath of it and go “aahhh.” And the latter will rent this or that film on Netflix in order to watch the story and savor the emotional-aesthetic ride. They have no upgrade hunger and satisfied with “good enough” in the bitrate department.

In fact, I know a major Manhattan-based film critic who watches films at home on a plain old small-screen TV and a regular-scale DVD player, and doesn’t feel a particular need to upgrade. Imagine!

It’s no secret that two smallish films about a young, highly intelligent curly-haired guy trying find his footing in life — The Education of Charlie Banks and Adventureland — are opening within a week of each other, and soon. March 27th and April 3rd respectively. And that both have the earnest, curly-haired Jesse Eisenberg in the lead role. 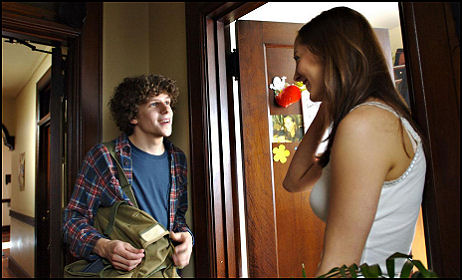 Jesse Eisenberg and Eva Amurri in The Education of Charlie Banks. 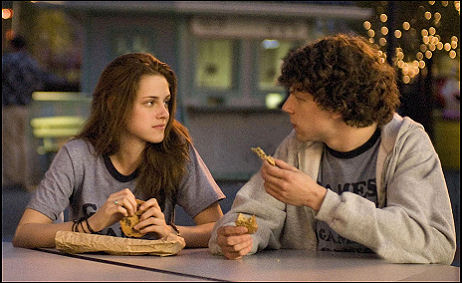 Kristen Stewart and Eisenberg in Adventureland.

And that both Eisenberg characters — — I’m sure they share many similarities but this one I’m dead certain of — experience erotic-emotional longings for a attractive classy-soulful 20something girl — Kristen Stewart in Adventureland and Eva Amurri (the daughter of Susan Sarandon) in Charlie Banks.

I missed Adventureland at Sundance (where it received a positive if unspectacular response) but I’ll be catching it tomorrow. It’s obviously the more broadly accessible audience film between the two, and the hand of director Greg Mottola (Superbad) tells you it’s not submental.

I haven’t seen Banks but it’s said to be a character-driven period piece, set on the Vassar campus in the early ’80s, about a bright dweeb (Eisenberg) having to deal again with an old high-school rival (Jason Ritter). The was directed by Limp Bizkit’s Fred Durst.

I have a slight problem with the title of Durst’s film. The Education of Charlie Banks suggests that it’s about some kind of primal, life-changing lesson that shapes the character of young Mr. Banks. Not “an” education but “the” — big difference. Except daily life is a constant education. School is never out in this sense, and who’s to say which life lesson you absorb is the big one that really matters?

That’s why I love the title of Nick Hornsby and Lone Scherfig‘s An Education so much. It doesn’t imply that what Carey Mulligan‘s character learns over the course of it is a major game-changer; it simply says that she picks up a thing or two. 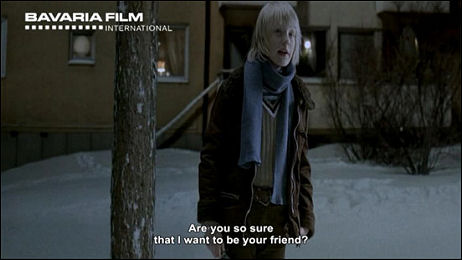 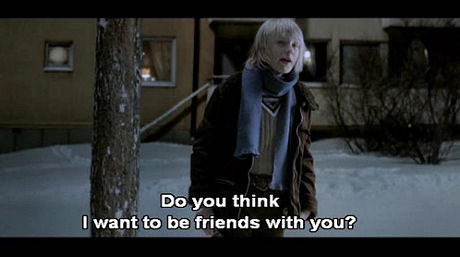