The collapsing Eiffel Tower scene starts to make it, almost makes it…and then doesn’t. That green metal-melting effect is crap, and they don’t show the tower crashing full force into the bridge. (They cut just as it hits.) It generally looks a little too CG. Sorry, guys. 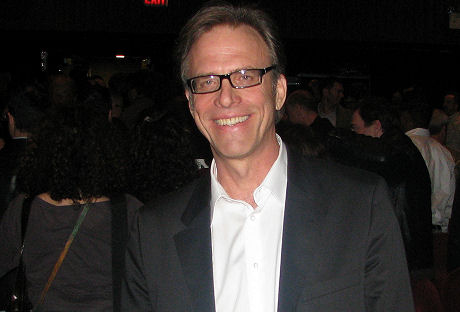 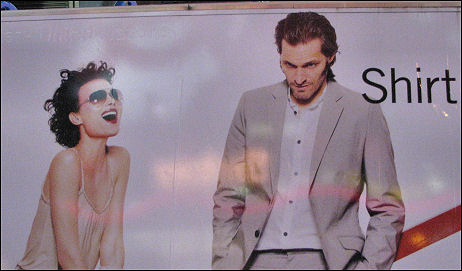 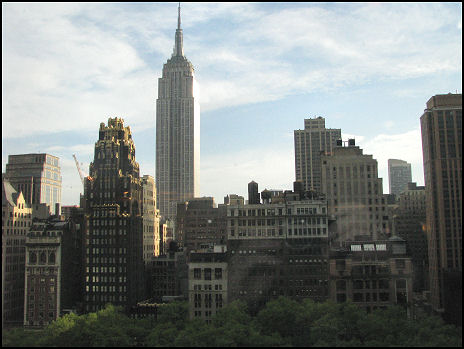 From the 15th floor of HBO’s headquarters during the party for Burma VJ. 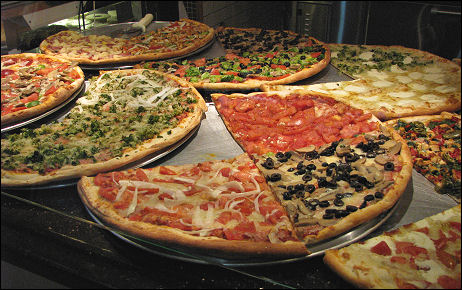 I’m staying away from pizza these days, but to even consider having a slice the pizza toppings have to look fresh and vividly colored.
May 8, 2009 1:53 pmby Jeffrey Wells

I caught the B’way production of Eugene O’Neil’s Desire Under The Elms last night, and was 90% floored. For me, Carla Gugino‘s Abbie seems like a revelation because she’s never had a role as searing in a film. She’s eye-popping, breathtaking. I know she has a fair amount of stage experience but it still felt like one of those “where did this come from?” performances. 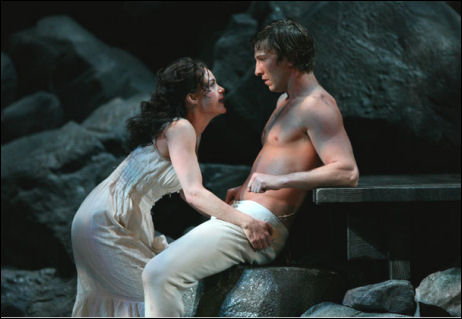 Actors are generally ill-served by Hollywood in that their the roles often seem limited and familiar, and the kind of acting they’re asked to deliver is limited and familiar. A good Broadway play, however, lets them expand their souls and really rip into things and show what they’re made of. This is what’s happened between Gugino and O’Neil and director Robert Falls.

Gugino has been fine in numerous films (I especially liked her in American Gangster ) but she’s awesome in Desire — on fire, earthy, heavy-breathing, planted, a backbone of iron. I feel as if I’ve seen her work for the first time. I’ve told the show’s publicist I’d like to interview her before leaving for France on Monday…silence. Whatever.

The play, I’ve read, began as part of an O’Neil series at Chicago’s Goodman Theatre. The amazing production design is by Walt Spangler. Gugino’s costars are Pablo Schreiber, Brian Dennehy, Boris McGiver and Daniel Stewart. McGiver and Stewart’s performances as a couple of grimy and smelly Clem Kadiddlehopper work animals seemed too broad. I kept wishing they would get off the stage, which is why I said my reaction was 90% positive. 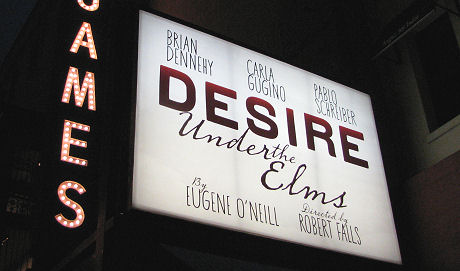 At long last, a DVD of Lonely Are The Brave, a 1962 low-key western that is arguably the finest character-driven film that Kirk Douglas ever starred in (or produced, for that matter), will be available on July 7 through Universal Home Video. (The best issue-driven film he starred in and produced was Stanley Kubrick‘s Paths of Glory.) 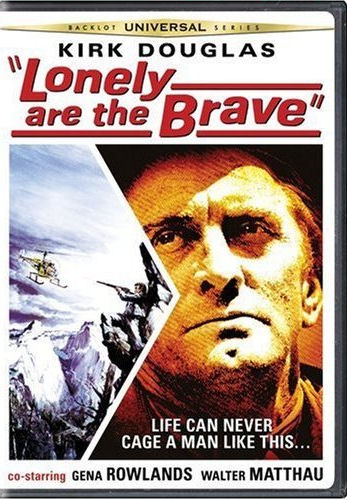 Directed by David Miller and written by Dalton Trumbo, Lonely Are The Brave was handsomely captured in in black-and-white Scope (which I’m a total fool for) by Philip Lathrop.

I can’t honestly call it a great or classic film, but has a certain dignity and air of resignation that stays with you, or has certainly stayed with me. It’s a quietly stirring piece about modernity and commerce bringing down the curtain on the Old West, and the style of it is masculine, unforced and unaffected, much like the aging stubborn cowboy played by Douglas.

He underplays with a kind of sturdy quietude — an atypical thing for Douglas — and occasionally gives off the scent of a seriously confused and terrified coyote who seems to know deep down that he’ll eventually be cornered — that his way of life is doomed. You can’t but feel for the guy.

Douglas’s saddle-bum character is a guy named Jack Burns. The story is basically about his escape from county jail after getting beat up by a surly deputy sheriff (George Kennedy ) and trying to hightail it off to Mexico on horseback. A fair-minded, moderately unsympathetic sheriff (Walter Matthau) is on his trail and trying to bring him in. It all ends sadly, tragically. Carol O’Connor gives a brief but memorable turn as a truck driver in the wrong place at the wrong time. An amazingly young-looking Geena Rowlands plays the wife of a friend whom Douglas visits. 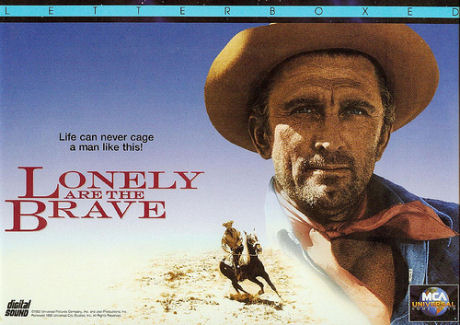 To my knowledge Lonely Are The Brave has never been out on domestic DVD. It came out on laser disc in ’94 (I know because I bought it), and has most likely been shown on TCM.

I interviewed Douglas in ’82 on the set of Eddie Macon’s Run, but our first meeting was at a party at Elaine’s in Manhattan. The first thing I told him was that Run and Lonely Are The Brave seemed somewhat similar, and that this time he was playing the pursuer instead of the pursued, etc. He soon had me pegged as a guy who not only knew all his films but could quote dialogue from some of them, and so we got along pretty well. I met him again in ’84 or thereabouts and he had no recollection whatsoever of our previous meeting.

HE’s Moises Chiullan caught the same Austin showing of Up (i.e., about two weeks ago) that Harry Knowles posted a review off, and he’s not aware of any embargo so here we go.

“To say that Russell is eager to please would be a massive understatement,” Chiullan writes. “He wants Carl to like him and approve of him so much it hurts. He’s an overeating, junk food-inhaling kid due to things he has trouble coping with that are made clear as the film progresses. He’s not overweight and inactive due to outright laziness and disinterest in being healthy.

“Russell is a modern kid brought up to learn plenty about the world outside having never really been allowed to explore anything. Without giving anything away, his arc as a character has a lot to do with how he wants to be more than what he’s been. ‘It’s okay to be overweight’ is not the thrust of that arc.”

The 2009 Cannes Film Festival screening schedule went up online yesterday. Since I’m only staying for nine days (Tuesday, 5.12 to Thursday, 5.21), I have to figure something out about two films showing on Friday, 5.22 — Gaspar Noe‘s Into The Void and Terry Gilliam‘s The Imaginarium of Doctor Parnassus. I’ll basically need to hunt these down at “market” screenings, which sometimes happen prior to press and public showings. Honestly? I’ll survive if I miss the Gilliam. 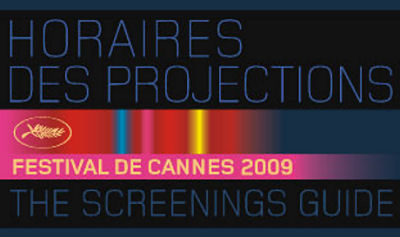 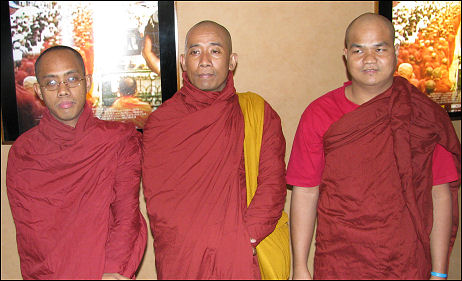 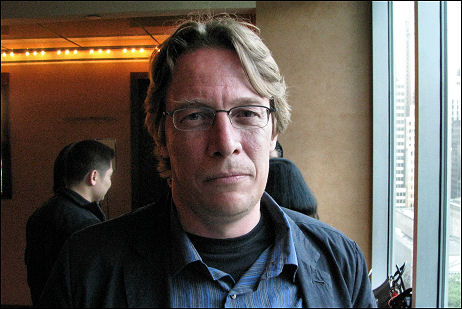 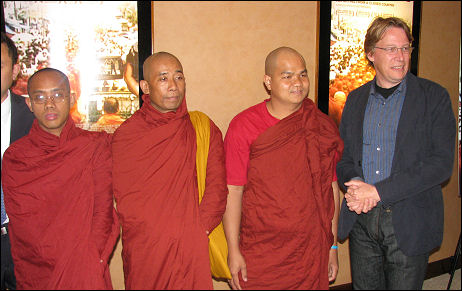 This Regan MacNeil Exorcist figure looks like a class job — correct colors and fabrics, realistic bedpost wrappings — and costs a mere $36 and change plus shipping. But where would you put something like this? On your fireplace mantle? On your dresser in your bedroom? Inside a specially constructed glass case in your den? Imagine looking at this thing every day for the rest of your life. 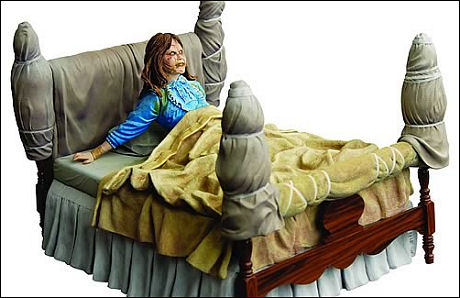 Time‘s Richard Corliss has declared that Pixar/Disney’s Up “will, like last year’s WALL*E, prove to be one of the most satisfying movie experiences of its year. The story of a septuagenarian grouch who uses his cane, hearing aid and dentures to thwart all evildoers; a buddy movie whose pals are separated by 70 years; a love story that transcends the grave — has there been a movie like this in the history of feature animation? 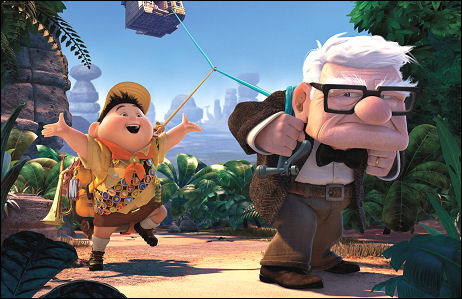 “Extending the patented Pixar mix of humor and heart, this is the studio’s most deeply emotional and affecting work, sending the audience on a journey in two new directions — penetratingly inward and exaltedly up.”

I spoke yesterday with a Los Angeles friend who saw a flat version of Up a day or two ago (as opposed to the 3D version that will show in Cannes and in select venues once it opens on 5.29) and he was very thumbs-up also. 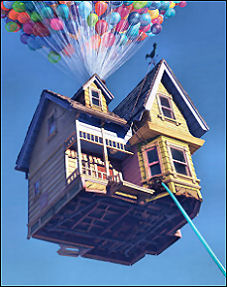 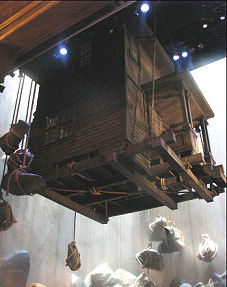 Pixar and Up co-directors Pete Docter and Bob Peterson to Worldwide Audiences: This is Russell, the lead adolescent in our film and our idea of a cute kid. And let’s not have any jabs about his weight — it’s who the kid is inside that counts. Corpulence doesn’t matter. Besides, obesity is normal among American kids these days so why not reflect that? 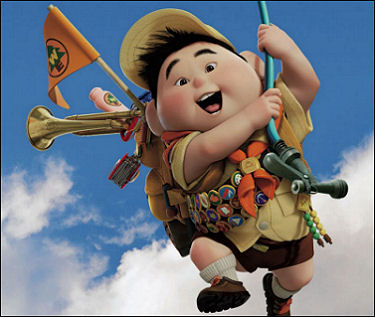 Russell, you can assume, eats loads of fast food, sits around a lot and, barring a major attitude change, will eventually grow into an full-sized Jabba who will face myriad health problems and a diminished life expectancy. And that’s fine. Because the size of your body isn’t as important as the size of your heart. And backing us up on this point are thousands of internet chat-room types ready to rip into anyone who suggests that presenting obesity as a normal and accepted adolescent condition is some kind of cultural problem. It’s not! Embrace the balloon-ness!