Jottings from the recently concluded James Cameron-Peter Jackson discussion are on my Twitter (wellshwood) account, but no column postings for now. I’m at a Focus Features party, for one thing, and on my second brew. “I can let it all go,” as Robert Mitchum once said. 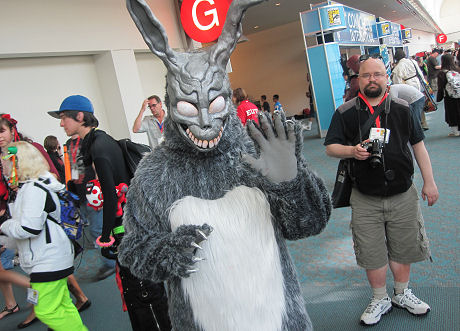 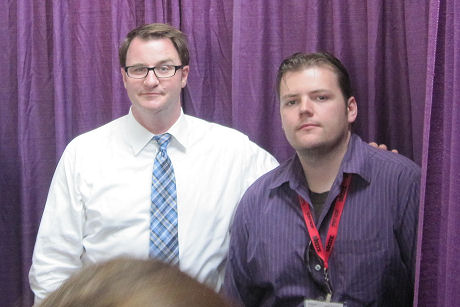 MSN Movies’ James Rocchi, In Contention‘s Kris Tapley just before the start of this afternoon’s 9 presentation, which I couldn’t get into. I’m not an eager-to-bark Cinefantastique lapdog, and some publicists will take this into account when handing out tickets. And some are cool. Down with that. Everything’s everything. 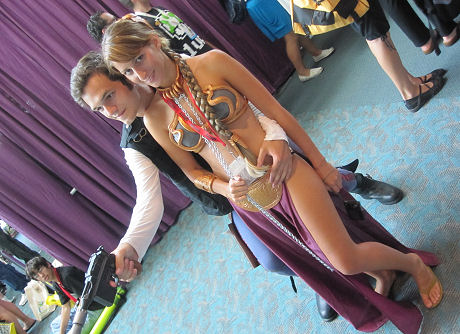 Turn on the laptop inside the Starbucks under the Bayfront Hilton and activate the AT&T Wifi air card connection. Three bars, good air, fine…except when you activate a browser this Hilton Hotel “pay us or you don’t get online” page comes up. So you try and activate your Starbucks/AT&T account (which I pay $20 bucks monthly for) and that won’t kick in either. So you have to shell out $13 and change to the Hilton goombahs or you can’t work. 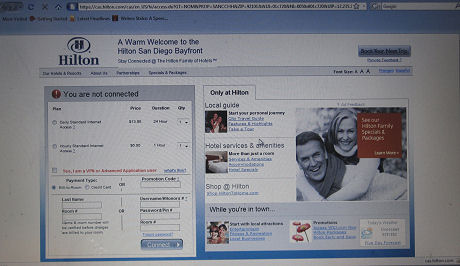 If you want to get into Hall H and you don’t have a VIP pass, you’ll have to line up under the blazing San Diego sun and just bake. The infamous Comic-Con swelter pit is directly adjacent to the Hall H entrance, or just south of the San Diego Convention Center. Two analogies came to my head: (a) Hebrew slaves waiting for portions of grain and asses milk during a lunch break as they build pharoah’s tomb; and (b) the Chicago stockyards.

12 Comments
I Don’t Believe You

“As of today all of the feedback has been so positive that it is hard to trust it,” Judd Apatow has written about responses to Funny People. “I hope people are telling me the truth,” he says, “but don’t feel obligated to go that way. If you like my film tell me in great detail what you liked about it, and if you don’t, please lie and tell me in even more detail what you loved about it so I believe your lie.

“And please don’t ask me what I am up to next. That’s a dead giveaway. I don’t think I could handle it.”

Apatow is presumably talking about junket whores. He should know that these guys never do anything but flatter when they’re in a room with talent. They’re gladhanders. Genuine honesty just isn’t in their DNA. And if it is, they’re certainly not going to let it out. What matters to them is one thing and one thing only, which is keeping their seat on the gravy train.

To hear it from Variety‘s Justin Chang, Nora Ephron‘s Julie & Julia is a “self-satisfied foodie fairy tale” that “feels middling, overstuffed and predigested.” He joins the crowd in noting that Meryl Streep‘s “delightfully daffy turn as Julia Child, the woman who demystified French cuisine for American households, is the freshest ingredient.” And yet the film disappoints, he says, by failing to offer “glorious culinary eye candy on the level of Babette’s Feast or Eat Drink Man Woman. Whatever auds make of Julie & Julia, it’s hard to imagine that Child herself, an unapologetic Francophile with one hell of an appetite, would have been much of a fan.”

Now that New Moon‘s Kristen Stewart and Taylor Lautner have told Movieline‘s Kyle Buchanan about their favorite movie scene, the issue I raised yesterday about Lautner is officially settled.

I’m sorry to blurt out a harsh thing but on top of his Beagle Boy boxer-dog nose the guy chose a boilerplate revenge-setup scene in Braveheart as his all-time fave. I’m sorry but that tears it. He sat down at the desk, picked up a pen, took the quiz and flunked.

Lautner’s favorite clip from Mel Gibson‘s Oscar-winning film is “like the worst scene,” he tells Buchanan, “but it’s at the very beginning when he sees his love die. That sets up the whole adventure where he’s going to fight for her. Just, like, the fire in his eyes when he sees that, and now he’s going on this mission for her…it’s the best.” Dumb-down much?

Stewart, on the other hand, names a very cool favorite film — Control. “[It’s] my favorite movie right now, because I’ve been watching a lot of band movies,” she says. “Sam Riley…like, any scene that he’s in, any scene in that movie, he’s incredible. Especially if you’re a fan of Joy Division or know anything about them, he’s astounding.”

Nine years ago I covered a Comic-Con panel called “Caught in the Net: Movie Webmasters on Hollywood, the Internet, and the Future of Their Bastard Child.” Chris Gore was the dark-haired and goateed moderator. Now look at him — he’s like a guy in a movie who has to age so the makeup team has given him a head of gray. Here’s Gore’s Twitter feed and some of the photos he’s taken. 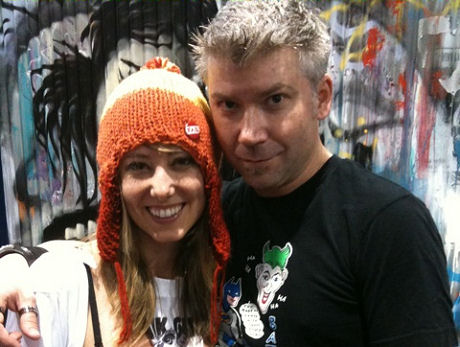 I fell asleep at this party last night while sitting upright on a sofa. I was sitting there with a glass of champagne, and the next thing I knew a guy was tapping me on the shoulder and saying “Sir? Sir? Are you okay?” The half-filled champagne glass was still in my right hand. 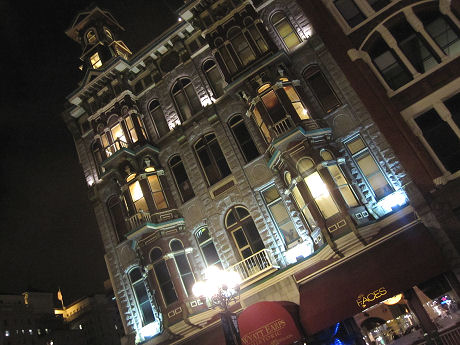