Newsday‘s John Anderson has examined the psychology behind the urges of comedians to make “serious” films and therefore achieve a kind of peer validation that never seems to result from being gifted or skilled at making people laugh. All true enough, I suppose, but he uses the piece to basically put down Judd Apatow‘s Funny People as some kind of cathartic exercise rather than a valid and admirable film on its own right, which it fully deserves to be seen as.

And then Anderson doubles-down on dodging the central issue by predicting that typical Apatow fans probably aren’t going to respond as supportively to Funny People as they did to Apatow’s Knocked Up and The 40 Year-Old Virgin, which played a much different game.

These films were warmer and coarser entertainments seeking to entertain. Funny People is an “entertaining” film also but also a significantly more ambitious one that offers up straight-dope story, characters and atmosphere. My reaction was that it seems to be (a) real as hell and (b) coming from an intimate place that Apatow knows quite well. And for this, Anderson seems to be saying , Apatow needs to be taken down for indulging in pretension. Nice.

“In America particularly, success has to be repeatable, lest one risk being dismissed as a failure,” Anderson writes. “And so perfection is pursued until failure is achieved.

“Is that what Apatow’s doing? The qualities of Funny People may be less interesting than what the effort represents. And how it makes fans feel.

“The case of Chaplin’s A Woman of Paris is a classic example: In 1923, Chaplin was free of his earlier contractual obligations, was the biggest star in the world and could do anything he wanted. Did he make the greatest comedy ever made? No,
he made a drama, one with a moral and a message; a good movie, but not what was expected by his fans, who rejected it outright.

“The audience for Apatow films is young, raunchy and attracted by rude humor. A movie about mortality doesn’t seem like the best way into their hearts.”

This Korean Cinema Today cover, which I happened to see at last week’s Thirst junket in Manhattan, shows what appears to be the original image used for the Thirst poster. The poster image is cleaner and more elegant but the magazine photo is slightly kinkier and more carnal. A reminder that U.S. movie posters are never too risque, although European posters sometimes are. 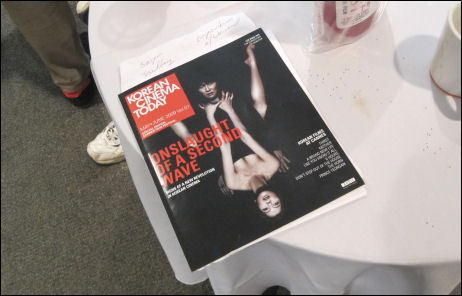 I was driving east on Santa Monica Blvd. yesterday afternoon when I heard a siren coming my way. Like any good citizen I pulled right over and waited for the white-and-red ambulance truck to pass by. Less than a split-second later this silver convertible roared right out into traffic, taking advantage of my having pulled over to the side to pass me. A real hot-dog dick move. 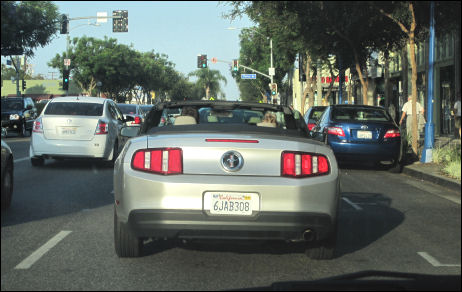 I’m guessing that the driver probably thought the following: “Aaah, shit…an ambulance. You know what? I’m only going to half pull-over and do a California stop. Why should I pull over and wait like everyone else? I’m young, I’m in love, I’ve got things to do and places to see, and I can also take that guy in front of me in the bargain. Plus my girl’s in the car and I don’t want to show too much obeisance before the power of the law.”

Wow, I can buy a DVD of The Outfit right now. The image quality is probably nothing to write home about. Some guy probably recorded it off a televised showing but I’ll take it for now. The site is called ioffer.com.

This is obviously a petty observation, but I couldn’t help thinking as I watched James Cameron up on the Comic-Con stage a couple of days ago that his nose has gotten larger since the Titanic days. Not that there’s anything wrong with that. I mentioned this to a couple of journalist pals a few minutes after the Cameron-Jackson discussion ended on Friday night and they both went “yeah, yeah.” The aging process is nothing to look forward to. Robert Evans once explained it as follows: “Your nose gets bigger, your ears get longer and your teeth get smaller.”

This N.Y. Times examination chart of films about the lives and temperaments of comedians, compiled/written by Peter Keepnews, reminds me that no film has really gotten it right. Until, I would add, Judd Apatow‘s Funny People. Not that I’m on any sort of intimate terms with this profession/mentality/lifestyle, but it sure as hell feels believable. I never felt I was being played or sold a bill of atmospheric/emotional goods.

11 Comments
In The Wings

Almost two years ago Apple Insider‘s Kasper Jade reported about a forthcoming larger-than-iPhone Apple device that he described in a headline as “a return to the Newton.” Now he’s describing Steve Jobs’ latest brainchild as “a 10-inch, 3G-enabled tablet, akin to a jumbo iPod touch.” It’s going to cost maybe $450 or $550 — “somewhere between the cost of a high-end iPhone and Apple’s most affordable Mac notebook” — and will most likely turn up any time between January and March 2010. 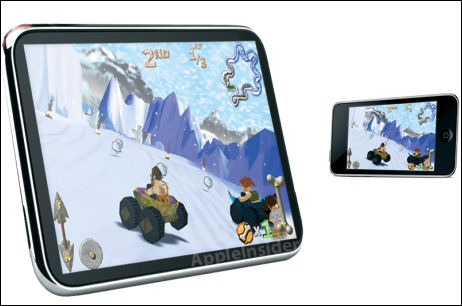