Support on Patreon Follow @wellshwood
61 Comments
Out to the Woodshed

There’s a passage in John Horn‘s recently-posted L.A. Times story about The Hurt Locker that made me extremely angry. “For all of the film’s early commercial and critical achievements,” he writes, “Summit now faces a Hurt Locker test nearly as tricky as the film’s central theme of disabling Iraqi improvised explosive devices. Younger moviegoers are not flocking to the film, which could limit its ticket sales.”

Excuse me? The Young and the Empty are paying to see big-studio CG crap but they’re steering clear of a genuinely cool, gripping and seriously thrilling film that is unquestionably among the year’s best and which runs circles around the filmmaking chops of Michael Bay and Stephen Sommers? And the youth of the nation can’t be bothered? There’s really and truly something wrong with these guys, honest to God. A deficiency in their souls.

Budd Schulberg, the morally-enraged writer who died Wednesday, knew fame and fortune and serious respect during his 95 years on the planet. But the praise that came his way tonight in numerous obituaries was primarily a tribute to three movies and one televised drama that were seen and praised during a five-year streak in the mid to late 1950s.

All four works were basically about social inequity and the unfairness of things in the rough and tumble of big-city commerce. They were each about powerful and ruthless people screwing over less powerful, more decent-minded colleagues or employees, and about the necessity of these lesser types taking a stand against evil and exploitation.

First was On The Waterfront (’54), the Oscar-winning feature that we all know about. Then came The Harder They Fall (’56), a Humphrey Bogart-Rod Steiger drama about the corruption of boxing that was allegedly based on the rise and fall of Primo Carnera. And then A Face in the Crowd (’57), about the rise and fall of a part folksy, part malicious and power-mad Will Rogers figure named Lonesome Rhodes (Andy Griffith). And finally the 1959 NBC Sunday Showcase presentation of What Makes Sammy Run?, which Schulberg had originally written in 1941 or thereabouts. The ’59 telecast starred Larry Blyden, John Forsythe and Barbara Rush.

Schulberg did a lot and wrote a lot but these four works were the core. They were all toughly and believably written, and focused on desperate, morally vague, sometimes conniving people up against the wall and facing hard ethical situations and decisions.

I’ll always have a soft spot for Waterfront, but that’s primarily about Marlon Brando‘s legendary performance as Terry Malloy. I’m not sure if my second favorite is A Face in a Crowd or What Makes Sammy Run? Come to think of it, who gives a shit what my second favorite Schulberg work is? Even I don’t care. I do know I’ve watched them all on DVD (I recently bought a DVD of an old Sammy kinescope), and that none to this day sound or feel rickety.

Here’s to a tough guy who had a brief but great run, and who — let’s face it — basically coasted on the reputation of those four works for the rest of his life.

Was it low ratings or embarassment over content that prompted Disney’s AMC Media Productions to pull the plug on At The Movies co-hosts Ben Lyons and Ben Mankiewicz? I’d like to know the facts and hear all the inside-dirt theories over the coming hours.

My guess is that it was 70% ratings and 30% embarassment over Lyons, whose imprecise and overly generous reviews of too many crap-level films attracted most of the criticism directed at the show. Mankiewicz wasn’t too bad by comparison. Tough deal. If I were Lyons I would issue a statement saying “I’d like to apologize to Ben Mankiewicz for taking him over the side with me.”

The new replacements are newspaper critics Michael Phillips of the Chicago Tribune and A.O. Scott of the New York Times. I’m not sure what their chemistry will be like or whether they’ll disagree very much — they have similar mild-mannered personalities — but thank God for the return of sophistication, film knowledge and all that good brainy stuff to the show, which had its glory days with Roger Ebert and Gene Siskel back in the ’80s and ’90s.

With Variety‘s Michael Fleming having reported that the wise and perceptive Tom Hanks has decided against playing Elwood P. Dowd in Steven Spielberg‘s Harvey remake, Movieline‘s Kyle Buchanan is predicting that Will Smith will probably snap it up.

But if Smith knows what’s good for him, he won’t. He needs to (a) man up and stop trying to be likable/charming/ingratiating all the time, (b) never commit on-screen suicide with lethal jellyfish ever again, and (c) realize that Spielberg is starting to be over and do the old downhill side. I’m pledging right now that if Smith turns Spielberg down he’ll get a 12-month goodwill pass from Hollywood Elsewhere. Okay, 18 months.

The word needs to go out to all the agencies — turn Spielberg down if he comes calling with the Harvey role! The ideal thing would be Spielberg re-experiencing what George McGovern went through in ’72 when he offered the vice-presidential slot to just about everyone after Thomas Eagleton was zotzed off the ticket. Can the Harvey project be nipped in the bud? It’s won’t be a catastrophe if it gets made. I’ll live, nobody will get sick, etc. But it does seem like such a rotten idea.

“Beyond the mail delays and the botched orders, the lack of human interaction is the big problem with Netflix and its cyber-ilk. Thanks to the Internet, we can now do nearly everything — working, shopping, moviegoing, social networking, having sex — on one machine at home. We’re becoming a society of shut-ins. We deprive ourselves of exercise, even if it’s just a stroll around the mall, until we’re the shape of those blobby people in WALL*E. And we deny ourselves the random epiphanies of human contact.” — from Richard Corliss‘s 8.10 Time essay, “Why Netflix Stinks: A Critic’s Complaint.” 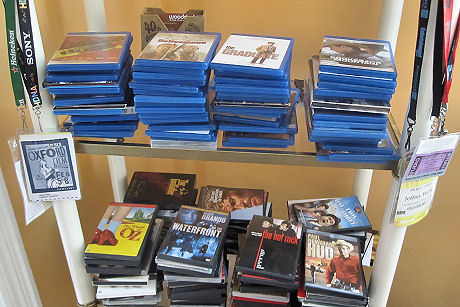 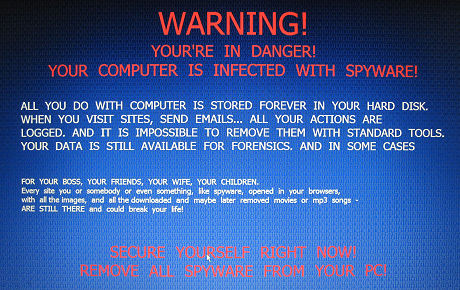 The greeting message of the low-rent spyware that took over my 17″ Gateway last Sunday. Notice the use of the phrase “break your life.” It’s one of those b.s. programs that says you’ve been invaded by 38 spywares/malwares and the only way to get rid of them is to purchase their b.s. spyware-fighting software for $59 and change. Except (a) you can’t bypass/blow it off and (b) the program doesn’t even respond to attempts to purchase. The infestation is so bad that I can’t even open the computer in safe mode. I need to at least recover the data so I have to take the damn thing into a computer repair shop on Sullivan Street this afternoon and pay them $90. 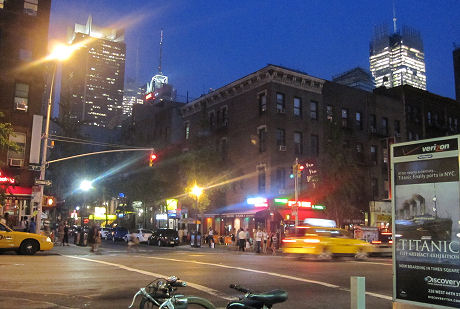 Not a rumor — John Flynn‘s The Outfit is actually showing at the Anthology Film Archives tomorrow night at 9:30 pm. Amazing. Now comes the letdown. I haven’t seen it in many years and have probably allowed the absence to disproportionately inflate its value. 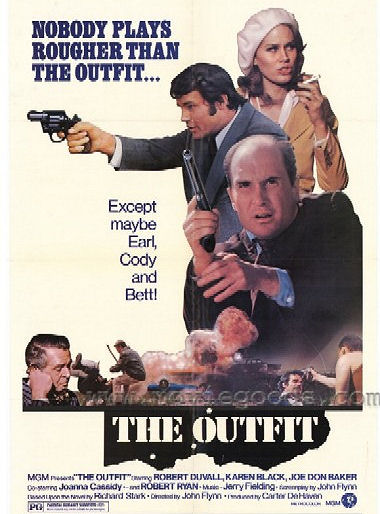 I had an argument last night with Jett over my assertion that conservative righties are essentially defined by selfishness. Because they’re basically the party of “me first, taking care of my own family, the less fortunate need to get their act together and work harder, darker-skinned people are entitled to the good life but a lot of them don’t seem to really get it like we do, I-don’t-know-about-that-global-warming-stuff, I like to play golf and drive my SUV to the hardware store or the country club and do whatever the hell I want within the bounds of reason because that’s what rugged American individualists get to do,” etc.

There are wrinkles and variations and exceptions among them but righties are basically bastards and social Darwinians who live by their belief that the world is for the few, I said. And Jett felt I was talking like a demagogue.

I then said that while I don’t like to use absolute moralist terms like “good” and “evil,” one has to at least define them and use them as reference terms if you want to communicate with people. One can therefore say that the essential core quality that has to exist as a behavioral platform for evil to flourish is selfishness. Selfishness — “not them but me, not the greater good but mine” — is where all bad and ugly things begin.

It can therefore be said that in this day and age, righties are, by their relentless me-first attitudes and by certain lights and after a certain fashion, evil.

Because they only care about their own rice bowl. Because they’re still stone cold in love with the idea of being John Wayne on horseback with a rifle at the ready, and because their party is the house that welcomes and pays lip service to all the ignorant crazies out there — the beer-gut yahoos and birthers and anti-stem-cell researchers, Minutemen and hee-haw Christians (which is to say fantasists who need to believe in absurd mythology in order to embrace morality). They are the party of “hey, what about the way things used to be when rock-solid white people basically controlled everything?”

Because in an era that cries out for measures that address social inequities and benefit the greater good, for deeds and legislation that will address the financial plundering of the last 30 years and keep the buccaneers who’ve brought this country to the brink of financial Armageddon from ever again revelling in insanely lavish profiteering to the detriment of Average Joes, and which will institute policies that will stop or least slow the advance of global pollution and ruination, the righties are still in love with the idea of “get government off our backs so we can hold onto more and live lavishly and hold high the torch of Ronald Reagan and have sleazy affairs with assistants if we so choose.”

In a perfect liberal world the selfishness of the truly obstinate righties (recognizing that some righties live by a certain Barry Goldwater-ish integrity that warrants a certain respect) would simply not be tolerated any more. I’m sorry if this sounds harsh or rash but any home-owner who’s dealt with crabgrass will understand. We don’t, of course, live in a perfect world. But we can dream.

Jett was appalled. You can’t rashly define conservatives as being evil, he said. I’m not precisely doing that, I said. I’m saying that their core instincts and beliefs allow for a behavioral climate and philosophy that feeds and winks at the essence of evil.

And that this way of seeing and living life has no place in a world that’s been all but ruined by selfish plundering that has done little but fortify the lifestyles of the tennis-playing, rifle-toting, red-tie-wearing and cowboy-hatted Cheney elite. I’m saying that while everyone is basically selfish and grappling on a constant daily basis with out-for-ourselves urges, at least liberals don’t embrace a theology that celebrates selfishness — i.e., “greed is good.”

Exterminate, forbid or significantly reduce selfishness in our society and we’re obviously looking at a better world. Therefore the extermination of the right would theoretically be a reasonably good thing. Not that this is possible. I understand that. But if I ran things they would all be rounded up and sent to green internment camps for reeducation. All right, I’m kidding.

This is what people say over beers. But the only way you learn what people really think is over beers. Or when they let go with a Freudian slip or words in passing (obiter dicta) that give the game away. Or when they’re angry and arguing with their families. People are basically one-eyed jacks. The world only sees the the palatable/reasonable side of their faces and natures.

This G.I. Joe spoof trailer gets down to the adolescent heart of the matter. The only bothersome thing is that it was posted three days ago.