Some days ago George Hamilton, whose early life inspired My One and Only, explained his man-wth-a-tan persona to Movieline‘s Stu VanAirsdale. The piece went up late this morning: “Originally my brother said to me, ‘You look paler than a nun’s butt,'” Hamilton recalls. “‘You need to get tan.’ So my brother would have me sit out with this reflector for about 15 minutes, and that would be it. Cary Grant told me and he told Tony Bennett, ‘Always have a tan. You look better.’

“It was vanity, but then when I was doing westerns, it made no sense whatsoever to go into makeup. They would always call me for an hour of makeup at 5:30 or 6. I said, ‘I don’t want to to go into makeup.’ So Glenn Ford said, “Look. You and I will get there at the same time. Take your lunch time, but don’t eat lunch. It just tires you out. We’ll sit out in the sun.” Little did I know that he would just drink a bottle of vodka and we’d sit there in the sun. But we got tan, and we never had to spend a minute in makeup.” 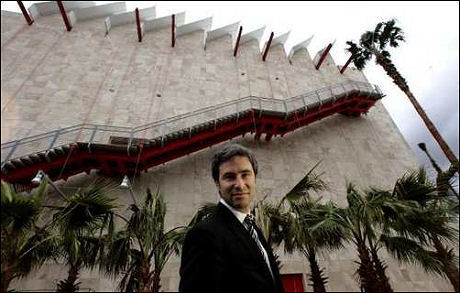 Joe Johnston‘s The Wolf Man (Universal, 2.10.10) looks like just another growling howling saliva-spewing bullshit CG wolfman movie, except it’s in period with bearded Anthony Hopkins chewing the supporting scenery. Love me some Hopkins! The fact that it’s set in what looks like 1890s England or thereabouts makes the casting of Benicio del Toro seem odd. He plays an American but let’s face it — he looks like a dressed-up Tijuana narcotics detective.

207 Comments
Avatar, We Have a Problem

The Avatar trailer has been up for a little less than two hours, and if HE reader reactions so far are any indication of how sophisticated cineastes and elite geekboys are going to respond to James Cameron‘s super-fantasy CG epic when it opens on 12.18, Cameron and 20th Century Fox have reason to be concerned. Maybe only a little; more more than that. You tell me.

People are reacting only to the look and style of the the thing (the trailer has no dialogue and the emotional/thematic impact is unknown), but no one seems to be genuinely blown away. Or even medium blown-away. No one is saying it looks like a game-changer. I realize that HE talk-backers can sometimes be negative to a fault, but the vibe doesn’t feel very good at all.

I mean, consider these comments: (a) “Looks an awful lot like a videogame cut scene”‘ (b) “The Battle for Terra II”; (c) “Obviously CG…really killed my my anticipation of anything groundbreaking”; (d) “a glorified cartoon“; (e) “The blue guys are somehow reminiscent of Thundercats”‘ (f) “Ferngully/Delgo…Ferngully plays Halo”; (g) “Nightcrawler and Mystique from X-Men“; (h) “that CGI beastie [in the jungle] was straight out of Attack of the Clones“; (i) “pretty underwhelming”‘ (h) “I hate how those blue-skinned creatures look”; (j) “who woulda thunk that Neill Blomkamp would deliver something more visually impressive than James Cameron?” (k) “Looks like the artwork of 100 covers of sci-fi books strung together”; (l) “some of the imagery was downright corny”; (m) “it all goes downhill after Sam Worthington is transformed into that Nightcrawlerish figure…the fantasy planet looks terrible…I’m not so excited anymore”; (n) “maybe 3D is the missing piece but this doesn’t have the ‘something you’ve never seen before’ quality that I was expecting”; (o) “this has a Lord of the Rings quality, meaning that instead of a couple of excellent FX elements in a real world it’s an entirely aritificial world that’s not entirely convincing…my first impression is pretty subdued“; (p) “The Abyss meets Return of the Jedi meets Peter Jackson‘s Rings trilogy.”

And I didn’t cherry-pick the negative comments. This is pretty much all of it with the fat cut out.

I’m going to re-post what I just posted in the comments section, which was a reposting of what I wrote from San Diego/ComicCon a few weeks back:

The difference between what you’re seeing here on your computer monitors and what Avatar looks like in 3-D is that the CG/animated parts aren’t really “animation” but a much higher and more visually precise synthesis. There’s truly something “extra” about it. The 3-D means a hell of a lot…it really does. You need to see it at one of the special 3D showings on Friday to get what I’m saying.

That said, I hear what some of you are saying. But it’s important to see Avatar as it’s meanto be seen. Here’s how I put it in my report from ComicCon:

“I was transported, blown away, melted down, reduced to adolescence, etc. I mean, I saw some truly great stuff.

“But I need to share one thing. As drop-dead awesome and mind-blowing as Avatar is in terms of super-sophisticated CG animation — a realm that looks as real as anything sitting outside your window or on the next block or next continent — the bulk of it does appear to be happening in an all-animated world.

“Which means that after the first-act, live-human footage (i.e., laying out the plot basics, preparation for the Na’vi transformation, etc.) the film seems to basically be a top-of-the-line animated action-thriller.

“Which means that once the visual climate and atmosphere of animation begins to settle in, we’ll be watching something that’s cool but one step removed from a ‘real’ world. Which means that for people like me, Avatar, beginning with the portion of the film in which the animation pretty much takes over, may not finally feel like a really solid and true-blue high-throttle experience because — yes, I realize this dates me — it lacks a certain biological completeness and therefore a certain trustworthiness.

“To put it another way the visual dazzle element will be wondrous, but the trust element (a reference to Werner Herzog‘s statement about things have gotten to a point at which audiences don’t trust their eyes any more) will be on constant hold. 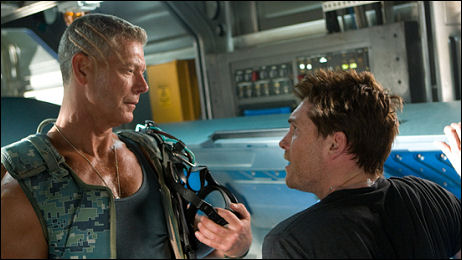 AICN reader comment #2: “These can’t be the actual, finished, fully rendered shots…right? Because if they are, I gotta tell you this looks like any other CGI movie I’ve seen [over] the past 5 or 6 years. This is NOT anything game-changing.”

AICN reader comment #3: “Something about the Na’avi’s faces looks ridiculous, adding to the cartoonishness.”

Second-to-last HE reader comment: “The blue people have mullets, or least the same kind of neck-do that Dog the Bounty Hunter’s son wears. They also sort of look like they just wandered off the cover of a Journey album. And [the movie] looks like the sem odl Cameron coillection of scrapping, disshevelled rock ‘n’ roll good guys vs. the evil, psychotic military guys. Peace and love win out in the end, man.”

Final HE reader comment: “Tomorrow’s preview will seal or break it.”

The Avatar trailer on the Apple website as well as French MSN website is up and running. Dialogue-free and just over two minutes long, it doesn’t provide anything close to the 3D, super-vivid, here-we-go impact I got from the 24-minute ComicCon reel (which had plenty of dialogue), but it’s an intriguing taste. So…first impressions? Considered reactions?

The fine fellow who proofed the Apple website copy needs to taken outside, tied to a fence post and Marlon Brando bull-whipped (a la One-Eyed Jacks). As HE reader “maxfm” has pointed out, the top line reads “FROM THE DIRECTOR OF THE ‘TITANIC’.” Mind-numbing, unbelievable.

Werner Herzog‘s My Son, My Son, What Have Ye Done? is, in my mind, a major Toronto Film Festival attraction. Has there ever been a Herzog film that didn’t haunt and mesmerize on some level? How can this latest be an exception, I’m asking myself, with Michael Shannon, Willem Dafoe, Chloe Sevigny, Brad Dourif and Michael Pena in the lead roles? Well, I guess it could. Anyone and anything can disappoint. To be off your game is human. (What was that gung-ho finale in Rescue Dawn about?)

I just have one question — what’s with the “Ye” in the title? The movie doesn’t take place in a Quaker or Amish community. (It was shot in LA, San Diego, Tijuana and Peru.) Is the title taken from a line from some noteworthy poem? It seems arch and pretentious and precious. Frankly? The more I think about it the more worried I am about the film as a whole. It has to be explained by Herzog now, or certainly before Toronto — that’s the only way out of this. 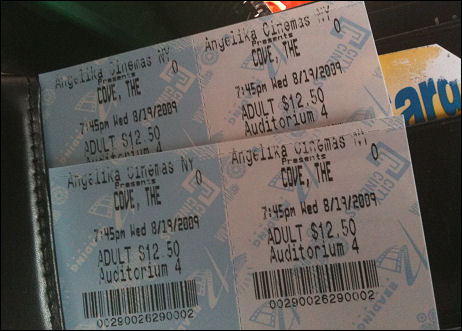 It costs $25 bills for two people to see The Cove at the Angelika. Movies are too damn pricey — prices have really gone over the top. Plus I had to run upstairs to tell the manager to bump up the sound, which was audible but “too soft,” as I put it 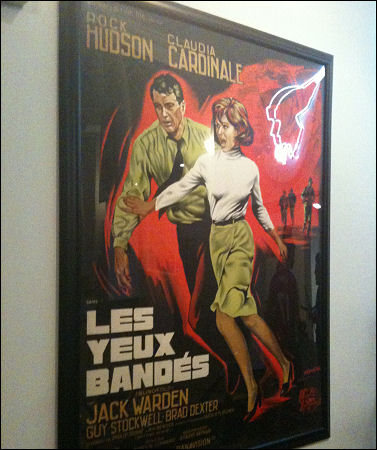 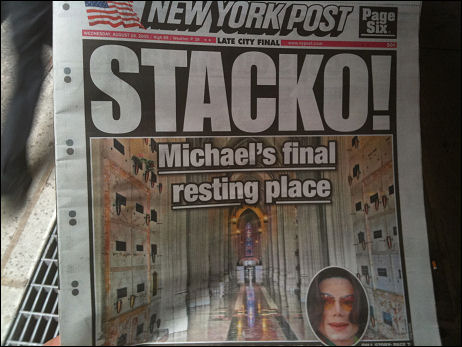 Wednesday, 8.19 issue, which I hadn’t seen until I got into town yesterday around 5:45. My first thought was that this fairly vicious headline may be one of the tabloid headline classics along with BRIDE OF JACKOSTEIN (a 1996 N.Y. Daily News headline), HEADLESS BODY IN TOPLESS BAR, SAM SLEEPS, etc.

Plus an NSFW drawing pasted on the base of a lamppost near the Angelika entrance on Houston. Sorry but it’s funny.