Jamie Stuart‘s Isn’t She?… is being described as “an ode to John Hughes that follows a day in the life of Claire (Lauren Currie Lewis) as she tries to claim unemployment insurance.”

I’ve just returned from a 6:15 pm show of This Is It, and I need to split in 20 minutes for a Werner Herzog interview at the Soho Grand. But I can at least say how startled I was by how enjoyable the Jackson doc was. I just love listening to those familiar catchy tunes all amped up with great bass tones, and watching Jackson and the team perform some pretty sharp dance moves — it’s almost pure pleasure. Almost, I say.

Because if you do any thinking at all about the back-story — why the “This Is It” tour was launched, why Jackson didn’t tour for years, why he looks like Skeletor — it all starts to feel a little strained. A diversion. A piece of a story without the full story. A sell job that doesn’t fully work. But if you can turn your brain off, it really isn’t that bad. You could do a lot worse for your $12.50. (Yes, that’s what I paid at the Chelsea Clearview.) And I came away with renewed respect for Jackson’s perfectionism and obvious determination to deliver like never before. He looks like hell here and there, but then he looked awful for years. The last time he looked semi-human was in the early ’90s.

I love this paragraph from David Edelstein‘s New York review: “Perhaps if he had pulled this concert series off, he might have been able to leave that young Michael behind and move in a new direction…reinvent himself…maybe alongside John Lennon if Mark David Chapman had misfired…and Buddy Holly on back-up guitar if his plane hadn’t crashed, and…oh, what’s the use? He was a mess and destined to self-destruct.

“When he held forth onscreen in a prologue to that song about the danger to the Earth (‘I love the planet … I love trees … What have we done to the world?’), all I could think was, ‘What have you done to your own natural state?’ In the name of evolution, this beautiful African-American boy turned himself into a whey-faced ghoul with a nose whittled down to cartilage. Maybe in the end he displaced his horror at his own self-mutilation onto Mother Nature.”

Everyone agreed on The Hurt Locker, Invictus, Precious and Up. I was the only one to stand up the Coen Bros.’ A Serious Man, and yet Lewin picked Star Trek….Jesus! I waffled my tenth-place choice, unable to decide if it’ll be Inglourious Basterds or District 9. This is strictly a pulse-taking prediction, of course. Only partially to do with my choices for the year’s best.

A longtime friend of Coming Attractions‘ Patrick Sauriol caught Doug Liman‘s Fair Game and is calling it “a really a tremendous, thought-provoking film. It’s based on the same titled memoir by former CIA Agent Valerie Plame, who of course worked for the agency as an undercover spy until her husband wrote an op-ed piece declaring that the Bush White House lied about Sadaam Hussein‘s efforts to buy yellow-cake uranium from Niger. 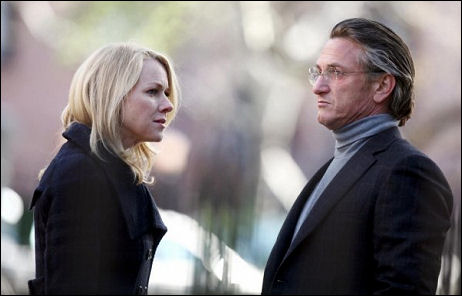 “Naomi Watts plays Plame (and as shown at the ending, really looks a lot like her), and plays her wonderfully. The story is set up through a sequence at the beginning showing her in action in the field, and in the CIA headquarters being completely dedicated to her job. She loves what she does for her country even at the price the travel and the secrecy puts on her family life.

“She’s married to former Ambassador Joe Wilson, played by Sean Penn in what very easily could (and should) be his next Oscar nomination. Wilson is a man in turmoil almost from his opening scene, dining with friends who think they know everything about the world. They don’t, Wilson doesn’t, but he certainly knows more about the Iraq situation than they do and is glad to tell anybody about it who will listen.

“His expertise gets him looked at (through no suggestion of his wife) and requested of by the CIA to take a trip to Niger to investigate reports that Hussein was looking to buy uranium from that country, which Wilson was a leading expert on. He agreed, made the trip, found that there was no possible way that a purchase of yellowcake was made, and reported that back to the government. The administration, as we now know, chose to ignore this report, and used the incorrect intelligence as a key basis in its case for war.

“This destroys Wilson, who starts to speak up in the press, and the leak of his wife’s identity was made. We’re led to believe that the order of the leak was made by Karl Rove to Scooter Libby (played by a hilariously serious David Andrews), and the rest is history. Plame’s career is destroyed, her marriage (and life) nearly go along with it, and a major investigation into corruption in the Bush White House is launched, ultimately leading to the fall of Libby.

“The film clocked in at roughly 1:50, and paced tremendously well. There was a side-plot they spent a bit too much time on involving an Iraqi family and Plame’s valiant efforts to save them from the invasion, but that was really the only [problem with] the film. Watts is excellent, at least as good as she was in Eastern Promises, and Penn is as good here as I’ve seen him.

“It’s directed by Doug Liman, who did an excellent job of it, and I believe he also served as DP, so kudos to him as I often forgot the camera was even rolling. Truly a wonderful human drama with political suspense that should interest anybody no matter how they vote. 9/10.”

A friend was watching Transformers 2 a while ago and spotted a pair of 4-frame blips of Barack Obama on TV monitors as the Decepticons are announcing their plans. So he is in the film after all. My friend thinks “it pretty much means that in its own subtle way the movie is anti-Obama propaganda. He’s mentioned by name as president, his administration is the bad guy trying to get rid of the Autobots to negotiate with the Decpticons, the military usurps his assistant, etc.” 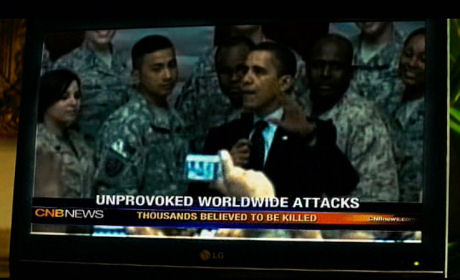 When a respected veteran actress faces a talented newcomer in the Best Actress race, nine times out of ten the newcomer wins. So concluded And The Winner Is columnist Scott Feinberg in a piece that went up yesterday. This means that — historically and prematurely speaking, of course — An Education‘s Carey Mulligan is well positioned to snag more votes than Julie & Julia‘s Meryl Streep in this year’s Oscar race.

Scott asked a few columnists to chime in on the subject. Here’s what I sent him last night:

Although I’m opposed to anything that further inflates and mythologizes the legend of the crippled freak known as Michael Jackson, I have to admit that Andrew Barker‘s Variety review of This Is It — a full-out rave — has me going. I’m mildly annoyed about having to pay to see the damn thing, but that’s Sony showbiz in this instance.

I’m glad, however, that Barker included this paragraph: “Members of the band, crew and dance troupe appear on camera between songs to gush (often while tearing up) about the honor of appearing with Jackson. While it’s hard to doubt their sincerity, it all seems a bit creepy when one remembers that this footage was originally intended for Jackson’s personal use.”

The film “is assembled with great care that belies its impromptu nature, and editors Don Brochu, Brandon Key, Tim Patterson and Kevin Stitt have done excellent work to pull together a coherent film from endless footage — even at nearly two hours, the film still feels too short.”

Forbes.com’s Bill McCuddy says the following: “Michael Jackson can sing! Michael Jackson can dance! This Is It does what it sets out to do. It proves that Michael was fit enough to serve. Even If in some scenes he looks so thin Ann Coulter could take him in a bar fight.

“The media crowd I saw it with in New York, by ther way, jeered out loud at the SNL-worthy red carpet festivities projected live from LA prior to the screening.

“The headline is that the world missed one of the greatest concerts that might have ever been.”

I’m glad that Nelson Mandela believed he was the master of his fate. He needed to, and I suppose he finally was, I believe this also, sort of. I am the master, yes, but fate and flaw and circumstance are always stepping into the ring with their persistent checks and balances. I am the captain of my soul, though — I do believe that. Whatever that means.