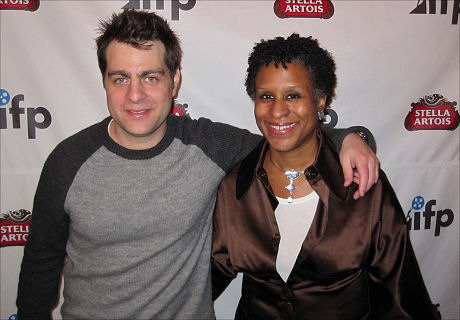 IFP Gotham Independent Award “Breakthrough Director” nominee Derick Martini (Lymelife) and Michelle Byrd, IFP Executive Director, at last night’s IFP celeberation for the nominees of the “Best Film Not Playing at a Theatre Near You” award. 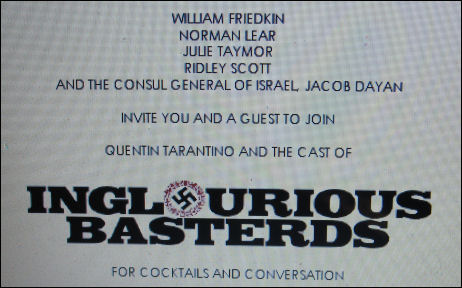 This is a private invitation to a private event (and the crop of this photo respects this), but the juxtaposition of the name of Jacob Dayan, senior representative of the State of Israel in the Southwestern United States, and the “o” Nazi swastika in the Inglourious Basterds title does seem a little jarring. 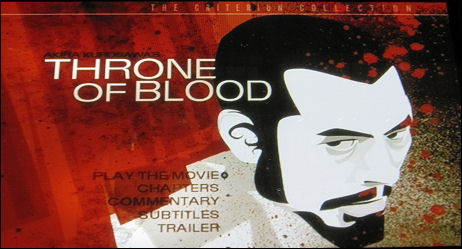 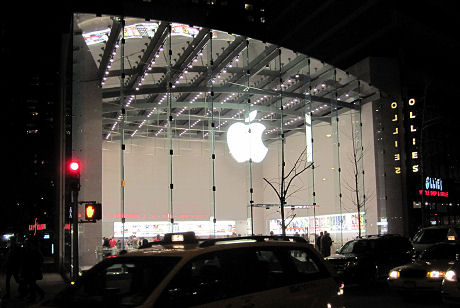 New Apple store on Upper West Side, almost right across from Lincoln Square plex at B’way and 68th. The store opened on 11.14.

A fellow Oscar handicapper recently conveyed this observation on the fly. He was talking about some late-breaking Oscar contending films that have begun to be seen and/or whispered about over the last week or so. (And no, Brothers was not part of the discussion since it only begins showing tonight.) I’m not saying or implying this myself — I was just struck by this guy’s powers of summation. I chuckled, I mean.

In lieu of recent reports that seasoned editors Walter Murch and Mark Goldblatt have been hired to try and punch up improve Joe Johnston‘s The Wolfman (Universal, 2.10), I heard from a guy a day or two ago who recently saw a research screening of the 19th Century-era horror film in Los Angeles, and who said three interesting things. 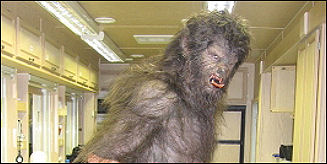 One, Benicio del Toro‘s role is that of a touring American Shakesperean actor along the lines of Edwin Booth. Two, his performance, which the guy didn’t think was all that terrific, is somewhat reminiscent of his landmark performance in Things We Lost in the Fire in that in involves his being in love with a woman he shouldn’t be in love with (i.e., Emily Blunt, playing his brother’s widow). And three, “You could almost relate his role to that of Lon Chaney, Jr.’s in real life and his always being overshadowed by his famous dad in the role, and connect that to the twist in this telling of the story, but that’s my fantasy.”

The best performance in the film, he feels, comes from Geraldine Chaplin “in a tiny little part, even though it’s conceived in such a way as to make no sense.”

The one thing that’s always bothered me about The Hurt Locker. One scene, I mean. Actually a single line of dialogue. A jocular U.S. Colonel (David Morse) asks Jeremy Renner‘s Sgt. James, a bomb-defusal Jedi, “What’s the best way to defuse one of these things?” And Renner answers, “Duhwayuhdohndyesuh.” I’ve seen this over and over, and each time I’ve asked myself “what?…what is Renner saying, for God’s sake? Has he ever tried speaking with marbles in his mouth, or taken elocution lessons? Twenty dwarves took turns doing handstands on the carpet.”

It finally hit me the last time I saw it. Renner is saying “the way you don’t die, sir.”

There were two screenings yesterday of Peter Jackson‘s The Lovely Bones (Paramount, 12.11 limited) — an exhibitor screening on the Paramount lot and (according to a friend) a SAG screening at the Landmark Westside Pavillion. I heard some stuff from one guy, and of course (a) it’s just one guy and (b) one always needs to take any earlybird opinion with a grain, etc. 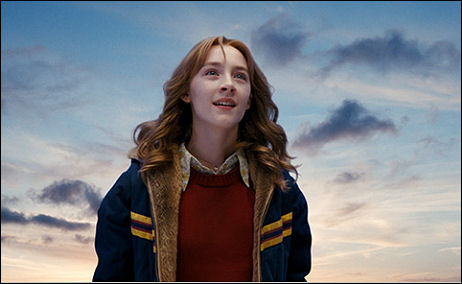 But as I considered this guy’s views I was reminded of something I read in a Terrence Rafferty piece on the film that ran in the N.Y. Times on 11.1, to wit: After being shown “a few minutes of footage” plus “an exceptionally handsome trailer,” Rafferty said that Jackson “appears to have made the attempt to be faithful to the wistful, lyrical tone of Alice Sebold‘s book, but there are indications, too, that he hasn’t entirely abandoned his hyperbolic horror style: the looming close-ups, the ominous shadows, the fast, vertiginous tracking shots

In response to which I reiterated my opinion that Jackson “has gotten to a point in his career in which subject matter or theme or tone, even, matters less than it used to. There is really only one law, one rule — he must be ‘Peter Jackson.’ He must underline, be frenzied, be show-offy, whip up the lather, goad his actors into emphatic modes, etc.”

The guy I heard from (i.e., someone I know well who passed along impressions from another guy) said several things that I’m not going to share. Okay, I’ll pass along one thing. The guy who saw The Lovely Bones is “not a Peter Jackson hater…he liked the Rings trilogy, and is a fan of Heavenly Creatures. But if Terry Gilliam ever decided to make a serial killer movie, this would be it.”

I’m going to stop there. There’s time enough to sift things through and let the viewing process find its natural mojo, so no more. Okay, one last observation: “What Dreams May Come, Part II.”

Lionsgate has provided Hit Fix/Awards Campaign columnist Greg Ellwood with an exclusive clip from Jim Sheridan‘s Brothers (which I’m seeing this evening) in which costars Carey Mulligan — the Best Actress front-runner for her work in An Education — and Natalie Portman share a low-key scene. I say again — half of the British-born Mulligan’s natural charm goes out the window when she’s obliged to speak with an American accent. (I’ve posted the embed code twice and it doesn’t work — screw it.) 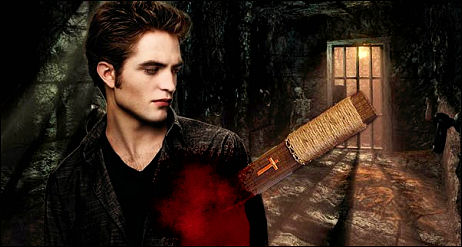 Much of what’s wrong with New Moon seems tracable to director Chris Weitz. In the view of L.A. Times critic Kenneth Turan, Weitz is a “polished” and “smooth professional who makes the vampire trains of Melissa Rosenberg‘s capable script run on time, but he almost seems too rational a director for this kind of project. This lack of animating madness combined with the novel’s demands give much of New Moon a marking-time quality.”

It was precisely this animating madness, a kind of “crazy-in-love energy” that made Twilight work as well as it did, Turan believes. (As do I.) All of this seemed to come from original director Catherine Hardwicke, whom Turn calls “a filmmaker of intense, sometimes overwhelming and out of control emotionality who seemed to feel these teenage characters in her bones.”

The reason Weitz recently told Moviemaker magazine that he might hang it up before too long, or so I suspect, is that deep down he knows he dropped the ball and screwed the pooch. “I still feel that I’m learning,” he says, “and yet I also feel that the number of aspects that go into making a film of the sort that I’m making now have become so multifold that it’s really exhausting.

“Every time I make a movie I’m pretty much convinced it’s the last time I’m going to be able to do it and that really it’s a rather silly occupation to undertake. But I think I have maybe one more film in me.”

He also talks about wanting to “learn to be a better surfer,” and “learn to speak Spanish fluently…I’d like to travel around, live in Italy; I’d like to learn kung fu…It’s nice to make movies, but it’s also really hard.”

Weitz is also talking about the arduous making of The Golden Compass, and how his New Line cinema bosses were awful to deal with and how the failure of that film kind of broke his spirit. But his more recent New Moon experience is obviously weighing on his mind right now, and we all know that people don’t talk about wandering around Europe and eating elegant dinners at sunset and becoming better surfers unless their souls are in need of healing.