I’m calling it the John Cooper-Trevor Groth pawprint effect. Longtime Sundance director Geoff Gilmore has gone east and Coop-Groth are the new co-honchos so they get to do things a little differently…wheee! And so some minor (but not insignificant) changes have been implemented as far as the Sundance journalist environments and screening ops are concerned. Nothing to get nuts about, but definitely less cool.

One, no more press screenings at the Yarrow hotel — they’re now being held at the Holiday Cinemas. Except the Yarrow was/is a really nice environment for hanging out between screenings, and there’s no schmooze or sit-down opportunities at the Holiday plex so that basically blows.

Two, there’s no more press lounge (a place with wifi, some tables, bagels-and-soup 4 sale) inside the Park City Marriot. The lounge had been there for years but no more. It’s been taken over and made into a cool-cat “filmmaker’s lounge,” or something that sounds like that.

Three, the new press lounge is apparently the balcony area above the main Marriott lobby. (Or so I was told.) One, it’s not big enough, and two, are they going to offer wifi in this area (as they did before in the old press lounge)? If they are it means free wifi will obviously be in the downstairs lobby as well, and will therefore be available to every Tom, Dick and Harry.

Four, no more Thursday press screenings, which they had last year. And no press screening tomorrow afternoon or evening for Howl, which is the opening night feature at the Eccles (along with a doc and a shorts program at the Egyptian). To see Howl you either have to score a ticket for tomorrow night’s opening-night Eccles screeening from MPRM or the producers, or you don’t get in and cant’ see it until the follow-up screening early Sunday afternoon. What is this?

The reason I’ve been arriving on Wednesday was an expectation I could start to see films at early-bird press screenings on Thursday. And that’s now out the window. The only way I can see films tomorrow is to go to Marriott press headquarters and sign out DVDs and watch them in one of the four little booths. 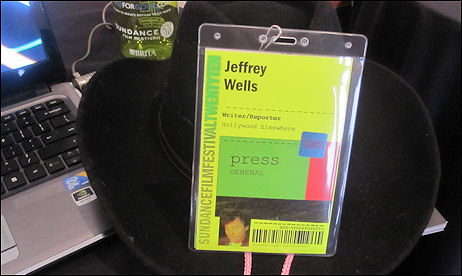 Even though the Newark Continental flight left almost an hour late (around 9:20 am), it got to Denver at 11:20 am local time, and my Frontier connection flight to Salt Lake City has been delayed about an hour, so I’m in like Flynn with time to spare. And I managed to tap out a fairly readable freelance piece for Fandango — “Confessions of an Oscar Blogger” — on the plane. I’ll be in Salt Lake City by 2:15 or so, Park City by 4 pm. Press credentials! 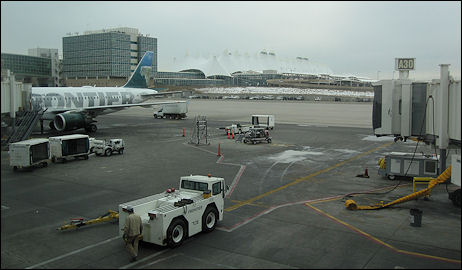 With the Academy’s final nomination deadline only four days off, few if any voters are able to think of ten Best Picture nominees, reports Notes on a Season‘s Pete Hammond. They can name five or six and then they stall out. This conundrum, of course, is precisely what Oscar blogger lists are made for.

“In countless conversations with academy voters over the past two weeks it’s apparent that not everyone is able to come up with 10 movies. In fact it’s an epidemic. According to the overwhelming majority of members to whom I have spoken, they get to five or six and give up on the other slots. One voter went so far as to actually send me an e-mail asking me to suggest seven other movies to augment their own three choices. Of course I obliged.

“‘I can barely find five movies to nominate. I have no idea what to do for 10,’ one exasperated member told me this week. When prodded for more information it was apparent they had only just a few of the real contenders and many in their pile of DVD screeners had so far gone unopened.

“Of course it isn’t required that members vote for 10 to have their voices heard, but the academy does subtly encourage making the effort.

“Here’s the official language on all ballots: ‘In order for any achievement to be among those chosen from this balloting it must have at least one first place vote. It is important that your FIRST CHOICE be written on the FIRST LINE. You need not fill in all 10 lines. The more preferences you indicate however, the greater the certainty that your ballot will influence the Best Picture nominees list.’

“With the complicated tabulating system,” Hammond notes, “a voter is probably not mistaken in thinking that the first three choices are the only ones that will count anyway, but this is fairly uncharted territory this year.

“Some voters conversely have told me they welcome the chance to name 10 movies as it frees them to go with their heart even if they believe it’s a wasted vote. After listing the usual suspects like The Hurt Locker, Up in the Air, An Education, etc., one guy said he selected Drag Me To Hell because that’s the best time he had at the movies all year and it doesn’t matter that it can’t possibly be nominated because he has nine other slots in which to ‘influence’ the race, as the academy language suggests.

“With all the lunches, parties and other events for academy members lately, its no wonder they can’t fill out their ballot. Who has time to actually see the movies?”