The Best Picture nomination of Joel and Ethan Coen‘s A Serious Man was the only whoo-hoo! among this morning’s officially announced Oscar contenders. Even I, one of the film’s biggest supporters, had lost hope that it would be included among the ten because so few seemed to share my feelings. After a while you just give up. But good sense prevailed among enough Academy members — thank the Movie Godz and the better angels of their nature.

Let it be loudly proclaimed and fully understood here and now that the Gurus of Gold who said that A Serious Man had no chance whatsover were Suzie Woz, Sasha Stone, Pete Hammond, David Poland, Dave Karger, Peter Howell, Eugene Hernandez and Gregory Ellwood.

The Hangover wasn’t nominated…yes! Everyone had declared early on that Crazy Heart was a performance movie, and so it didn’t make it this morning.

Why didn’t A Single Man make the cut? It certainly should have, being a far more impassioned, thematically distinctive and exquisitely shaped drama than The Blind Side. Was it the charge that it seemed too fashion-spready? That was one of the reason it should have been nominated — it gave the film a sense of visual harmony and expressed the tasteful tidiness in Colin Firth‘s character. Did some people have a problem with a preponderance of “Gay-O-Vision,” to borrow a term from David Poland?

Everyone knew that Invictus was second-tier Eastwood and most accepted the fact that it didn’t have a snowball’s chance, and yet nine Gurus of Gold contributors placed it among their ten, and in fact thought it was more likely to make the cut than A Serious Man. The Invictus/Guru brigade included Ellwood, Hammond, Howell, Karger, Mark Olsen, Poland, Steve Pond, Sean Smith, Stone and Woz.

If we were living in Stalinist Russia in the 1930s the above Gurus would be looking over their shoulders, changing the locks on their doors just in case, and wondering whether to plan extended vacations at the dachas or stay inside the Kremlin and wrangle it out with their enemies.

Oscar nomination anticipation woke me up 4:30 am this morning. I’ve been down this road, know how it goes. It was illogical — pointless — to be up that early (particularly knowing that the most rabid Oscar-covering L.A. journalists wouldn’t be waking up until 7 am Manhattan time) but when the internal clock says “wake up,” there’s no choice.

After floating the rumor that Paramount may be picking up Catfish, First Showing.net’s Alex Billlington suggests that a title change is in order, whoever acquires the rights.

“I’ve seen the documentary,” he writes, “and I can tell you that the title has nothing to do with anything in it. At one point it’s mentioned, but that line is pretty much irrelevant and has no connection with the rest of the story.”

Billington is correct. As a title, Catfish is a perfect fulfillment of marquee death. It was arguably the worst Sundance movie title of the entire 2010 festival, the other two being Writer’s Bone and Restrepo.

My alternate title suggestions: Game, I Want You, The Touch, Brushstroke, Drive My Car, Michigan Girl, Fishline, The Girl With The Big Honker. Or the first name of the Facebook girl whom Nev falls for, which I forget. That would be nebulous but meaningful at the end.

If the wordless, exquisitely done life-of-a-marriage sequence hadn’t been part of Up, would anyone be talking about this animated Pixar film being a likely/deserving Best Picture nominee? We all know the answer.

Up is “simply is not worthy of consideration,” writes Sammyray in a piece called “Down on Up.” “Most positive reviews (including mine) mentioned the truly beautiful and wordless montage at the outset that tracked the lifelong love of Carl and Ellie. This sequence is easily among Pixar’s finest work, mixing complex emotions with a truly magnificent series of images. But 20 minutes does not a Best Picture make.”

Except the silent sequence doesn’t last 20 minutes. My recollection is that it’s more like eight or nine minutes, tops.

The Up dissers have a surge going now — I can feel it — but they started too late to have an effect on the nominations.

GeekWeek‘s Mike Le has compiled a list of the 20 greatest extended takes in movie history (along with 20 YouTube clips illustrating same). His all-time #1 favorite is the entering-the-Copacabana sequence from Martin Scorsese‘s Goodfellas. My lifetime favorite is the assault-on-the-van sequence from Alfonso Cuaron‘s Children of Men (which ranks #4 on Le’s list).

An extended take “is a cinematic hire-wire act that pushes the director, actors, cinematographer, art department, sound design, and every other department to their limits,” Le explains. “They take a very long time to set-up, and are very easy to mess up. The longer the take, the more pressure is added to get it right.”

This statistic-driven article posted today by And The Winner Is columnist Scott Feinberg, called “WILL THE ACADEMY REVEAL ITS (COLOR) BLIND SIDE?”, conveys the root of the general thinking behind the Precious and Mo’Nique praisings by dutiful Hollywood liberals. It also underlines my repeatedly-stated point that if Precious was about a white-trash Tennessee girl being horribly abused by her low-rent hillbilly mom, it wouldn’t have been paid the slightest attention by anyone, much less the award-bestowing critics and Academy members. 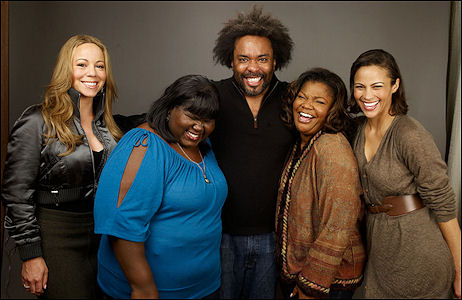 If Joel and Ethan Coen‘s A Serious Man fails to land a Best Picture nomination tomorrow morning (which is somewhere between a likely and more-than-likely scenario) but Todd Phillip‘s The Hangover does, there will be “so great a cry throughout the land,” as Charlton Heston once put in Ben-Hur.

It will be a lamentation for 21st Century movie culture, for the provincial thinking of the Academy types who failed to value the humor in the Coens’ misanthropy, for those who constantly fail to consider the Movie Godz perspective, for the failure to understand the difference between a generally pleasing film and an exceptionally worthy one, etc. It’ll be a terrible thing, and it had better not happen…just sayin’.

I had a moderately enjoyable time with The Hangover , and especially Ed Helms‘ performance, but please show some restraint and perspective. And this is no slag on Phillips, a very sharp and crafty guy who knows exactly how to do what he does best.

The physical and stylistic differences in the baseball players and outfits in these two stills express a thousand words worth of cultural deterioration. Early ’60s pro players had a kind of classic studly cool (reasonably trim bods, tailored uniforms, knee socks, black leather shoes with cleats) while today the homie look has taken over (pot bellies, pajama pants, sneakers). Go ahead and throw darts, but players had a much more attractive look during the Kennedy administration. 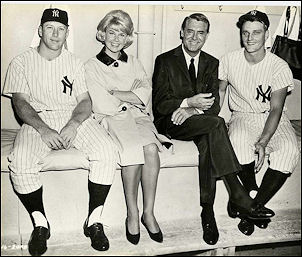 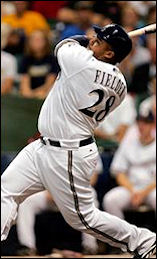 “In many respects, Sundance is always the same. Movies you expect to be good, disappoint; the films you shy away from because they sound bad on paper turn out to be wonderful. Half the time you feel as of you’re in the wrong theater. That said, I thought the mood this year was high. Positive, not poisonous like last year. People seemed upbeat, invigorated, inspired.” — Best quote in Eric Kohn and Sharon Waxman‘s 1.31 Sundance 2010 sum-up piece.

I’ve just been invited to a February 8th press day for Adam Kane‘s Formosa Betrayed, a drama about an attempt by a 20-something real-estate shark to lease the legendary but ailing Formosa Cafe for the covert purpose of turning it into a Burger King franchise. It’s kind of a Mike Judge-type dramedy about the extermination of pre-1950s architectural traditions in Los Angeles…something like that. 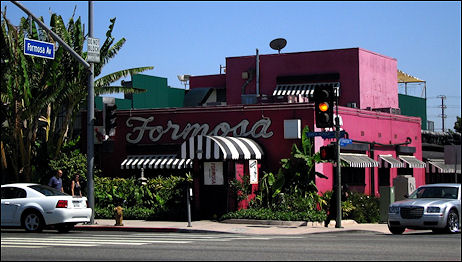 Formosa Betrayed actually tells the story of an FBI Agent (James Van Der Beek) investigating of the murder of a Taiwanese-American professor on U.S. soil. With the help of an FBI colleague (John Heard) and a Chicago police detective (Leslie Hope ), Van der Beek discovers…well, whatever. But Taiwan footage is definitely part of the visual package.