I don’t understand why reviewers are tippy-toeing around the Big Third-Act Revelation of Remember Me (Summit, 3.12) when they’re all writing “largely set in the summer of 2001” or words to that effect. With the story happening in New York City, what else could those seven words suggest? It’s not “largely set in the summer of 2000” or the summer of ’02 or ’04…please. I knew dead cold how this movie would end before I walked into the theatre. (And my walking out before the end is immaterial.)

So N.Y. Times critic Manohla Dargis giving the game away at the end of her review, particularly in her explanation of the film’s rating, is hardly a big spoiler…c’mon. Especially coupled with her calling the finale “shamelessly exploitative.”

25% of those who selected the most anticipated Oscar-level flicks of 2010 on Sasha Stone‘s awardsdaily.com put Chris Nolan‘s Inception at the top of the list, followed by Terrence Malick‘s The Tree of Life, Derek Cianfrance‘s Blue Valentine (forget it), Darren Aronofsky‘s Black Swan and Joel and Ethan Coen‘s True Grit.

Except Stone didn’t even list Ed Zwick‘s Love and Other Drugs, which some believe may be an awards-level contender as least as far as Anne Hathaway‘s performance is concerned…hello?

N.Y. Times “Media Decoder” David Carr‘s commentary on Variety‘s whacking of chief film critic Todd McCarthy is worth a listen. The assessment isn’t startling, but there’s something about Carr’s delivery that makes it seem extra-sage. I hate the Times‘ mule-headed policy of being…what, the last major news org/website that refuses to provide embed codes?

Maybe a bit too restrained and stagey here and there, but the diminishment of the combatants and indeed the fight itself through mostly wide-angle long shots (with only a few medium close-ups) made for a classic fight-scene-with-a-point. Love those gouges and cuts. The punches sound pretty good too; ditto the exhaustion and labored breathing. “All I can say, McKay, is that you take a helluva long time to say goodbye.”

Here’s that CNN article I was interviewed for the other day about Gabourey Sidibe‘s acting-career prospects. It’s nicely written. The author is Breeanna Hare.

I’m sitting next to a couple of twenty-somethings at a Starbucks on Eighth and 50-something, and I’ve been listening to them talk for last 40 or 45 minutes, and it never ceases to amaze how these guys, whom I almost regard as a separate species, all submit to the exact same mall-speak fascism in which there are no declarative sentences but constant questioning tones, as if the speaker is basically saying “is it okay if I say this? Because I don’t want to seem overly assertive…so is it, like, okay?”

And so instead of saying “I walked into that asshole’s office and told him if I didn’t get a raise I’d quit”, the GenYs say “so I, like, walked into his office? And said, uhhm, if I don’t, like, get a raise I’ll have to, you know, quit?” It’s pathetic. They’re all a bunch of Zeligs. If I was Absolute Dictator I would round them all up and put them in evening speech classes, and the first lesson would be that you really don’t need to feel uncertain or hesitant or in any way submissive when speaking a declarative sentence. Tens of millions of under-30s constantly speak with this questioning tone, as if they were all cloned by the same Mengele. It’s freaky.

And yet my two boys (21 and 20) don’t talk this way, and neither does Zoe Kazan. Wait, does Kristin Stewart speak like this? No, it couldn’t be. 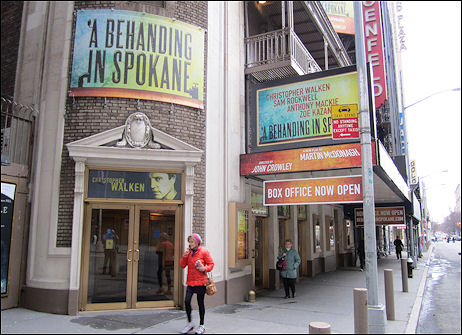 It’s a little late in the cycle, but here‘s a chat with Hurt Locker double-Oscar winner Paul Ottosson, who won for sound editing and mixing last Sunday night. Brought to you and yours by the MakingOf.com guys. (The embed code is only two and half lines, but other embeds are longer than Russian novels. I hate — “I’m using the word ‘hate’ here” — voluminous coding.)

Roger Ebert has four-starred Paul Greengrass‘s Green Zone — fine. But the film will not come under fire “from those who are still defending the fabricated intelligence we used as an excuse to invade Iraq” as much as those who feel that it brings nothing really new to the table (factually, politically, stylistically), and that it would have felt at least semi-relevant if it had come out, say, two or three years ago. Or four, even.

A Green Zone friend-of-the-family asked this morning if I enjoyed it, and I said “yeah, but it’s no United 93. It’s basically the Bourne Zone, and therefore feels like a bit of the old same-old same-old. Paul should have named actual names, I feel — no stand-ins. And the shaky-cam thing is starting to bother me a bit.”

In a N.Y. Press profile of Zoe Kazan (The Exploding Girl, Behanding in Spokane), Eric Kohn suggests she has “the petite appeal of a Zooey Deschanel 2.0, her expressive blue eyes seemingly bursting out her diminutive noggin in an almost-hyperbolic image of pixie cuteness.” Among the bullet points: (a) she’s a die-hard New Yorker who’s against moving to Los Angeles (“There’s no dearth of work here”), (b) she wants “range” (i.e., character roles) and not a Katharine Hepburn-like career, (c) she’s thinking of bailing on Facebook because of the innumerable-lewd-ayhole factor, and (d) as New York magazine has called her Behanding character “a principled idiot,” a Kazan confidante describes the character as a “stupider” version of Kazan herself.

Two online movie-clips sites are suddenly angling for big attention at South by Southwest. Movie Clips.com, the Rich Raddon-Zach James site which appeared last December, has unveiled a new player. And this afternoon I’m dropping by the offices of AnyClip.com, which is will be promoting its presence in various ways at SXSW and launching on 3.15.

I don’t know anything. I’m just getting my feet wet. But the key to easy clip access is having a vast library (obviously) and providing embed codes — simple. Movie Clips.com has more money, obviously, but other differences require study.

“Barack Obama‘s whole career has been based on the idea of transcending partisanship.” the Daily Beast‘s Paul Beinart wrote earlier today. “But lately, by confronting Republicans rather than courting them, Obama has Democrats fired up.

“Amidst the speculation over whether David Axelrod hates Rahm Emanuel or Rahm Emanuel hates David Axelrod or Lawrence Summers hates them both, the punditocracy has glossed over something significant: Team Obama has had one hell of a month. In late January, health care reform was widely considered dead. Now it’s considered a better than even bet. It could all still end in tears, of course. But for the moment, Barack Obama has his mojo back.

“And he has it back for one basic reason: He’s given up the dream that he could transcend the partisan divide.”

Please, please make this true! By this I mean make this a repeatedly observable and provable reality. There’s only way to deal with the rabid right. Attack them, eviscerate them, and basically make their lives a living hell. And when they finally start to buckle and whine and ask you to please stop, then you really turn on the pain like Genghis Khan. That’s the only thing they understand. It’s the only way to treat them.