The rap against Joseph Mankiewicz‘s Cleopatra (1963) is that it’s stately, slow-moving, oppressively talky, etc. But the opening credits — black font, a series of faded wall paintings, Alex North‘s music — are arresting, and then fascinating during a 20-second passage (starting a little after 2:35). North’s score slips into a somber mood and then builds into slight fanfare as the final painting becomes more and more vivid in stages, and finally transitions into 70mm live action.

It’s a simple elegant conveying of the fact that the centuries have faded and blurred the histories of Cleopatra, Julius Caesar and Marc Antony, and that this film is not only un-fading and un-blurring what happened, but applying a sharp, super-costly Big Hollywood sheen.

I’ve really enjoyed this portion — a sliver really — of this otherwise negligible film for years, or since it’s been out on DVD, I should say. The full-boat 243-minute version is the only way to suffer through this thing.

There’s a portion of ten or twelve minutes after the credits with Rex Harrison and Martin Landau and the rest that’s fairly efficient, and then — about 16 or 17 minutes in — Elizabeth Taylor arrives, and the film soon becomes draggy, and then tedious, and then suffocating.

In his 6.13.63 review, N.Y. Times critic Bosley Crowther called Cleopatra “one of the great epic films of our day.”

Heigl and Diaz both play 30ish spirited blondes who squeal and freak in the presence of guns and danger and squealing tires, etc. Their lives are turned upside down big-time by Kutcher and Cruise, who both play sardonic super-spy smoothies, exposing the ladies to all sorts of hair-raising, hair-trigger situations, etc. The films are presumably different in this way and that (perhaps vastly different in several ways — I haven’t seen either), but their respective trailers do suggest that they’re cut from the same cloth.

I’m on a Philly-to-Manhattan bus with limited wifi, but a trusted friend says he’s tried PowerDVD 10 CyberLink TrueTheater Technology, and that it “works” in a manner of speaking. “With one click, any 2-D DVD gets transformed into 3-D…and it looks no worse than what they did with Clash of the Titans!”

In a Sunday, 4.11 article called “Scrutiny on the Bounty,” Variety editor Tim Gray complains about how internet columnists got it wrong about the staff eliminations of chief film critic Todd McCarthy, senior critic Derek Elley and chief theatre critic David Rooney. But even now, more than a month later, Gray presents a not-entirely-candid account himself. 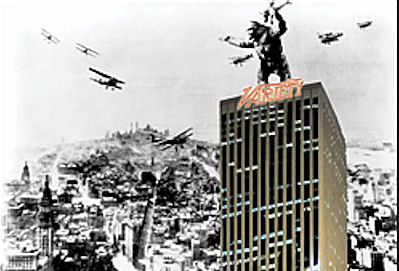 “On March 8, Variety restructured its reviews department and eliminated full-time reviewers,” Gray writes. “We asked Todd McCarthy, David Rooney and Derek Elley to stay onboard, under new terms.” He later states that “from day one, we asked the review trio to assume central roles” among Variety‘s group of freelancers. “But many bloggers declined to ask details,” says Gray, “and just jumped to conclusions.”

I didn’t jump to conclusions. I spoke to McCarthy that very day, and he told me that Variety had only vaguely alluded to a freelance deal as a down-the-road thing. Rooney says also that Variety told him (a) no more staff employment with (a) no “concrete” offer of a freelance deal. Variety later wrote him “they would like to do a freelance deal…we are going to get back to you about that.” As most of us know, pledges of what employers would “like” to do plus $1.75 will get you a bus ticket.

I checked back today and was told in fact that it was only after the big media brouhaha about McCarthy being canned that Variety came back to McCarthy and began discussing terms of a freelance arrangement. So that “from day one” comment is questionable or, as one observer puts it, “creative.” I’m told McCarthy will make a yea-nay decision on that offer later this week.

So add up (a) a termination of your staff deal and (b) no specific offer of a freelance arrangement and whaddaya got? Most people would call that a severing of the ways or, as I put it on 3.8, a Joe Pesci-style whacking. Okay, so Variety came back later and offered to inject that green Re-animator serum and restore McCarthy to a semblance of life, fine. But they still cut him, Rooney and Elley loose upon heaving seas. 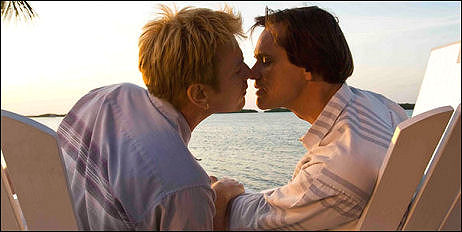 If you understand and agree with the concept of life improving as you get older (as long as you live it like Clint Eastwood, that is — amply funded, constant flexing of creative muscles, working out daily, cracking jokes and all that), leaving this mortal coil at age 70 is, I feel, a profoundly sad thing. Yesterday’s departure of 70 year-old actress Dixie Carter (Designing Women, That Evening Sun, Desperate Housewives) is noted in this context. A spokesperson wouldn’t say where or how, but husband Hal Holbrook‘s use of the term “tragedy” rather than, say, “quiet passing” suggests that she met with an unexpected, unfair-seeming affliction. 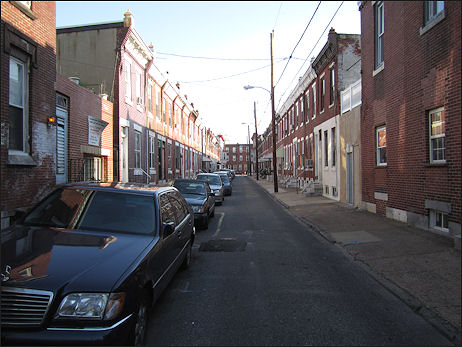 Looking north on Philadelphia’s South Carlisle Street near Morris — Sunday, 4.11, 8:20 am. Took Bolt Bus yesterday to visit Dylan, who’s close to finishing his sophomore year at University of the Arts. 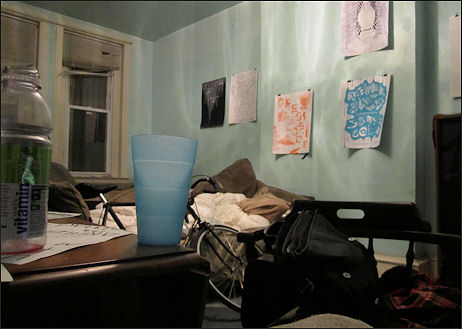 How could the sharp decrease in Clash of the Titans dollars this weekend (off 68% yesterday morning) not be expected with the murky faux-3D? It’s hardly the fault of Sam Worthington (who, by the way, has a massive, buffalo-sized head, as do most movie stars). Clash was off 68% yesterday morning but the overall weekend drop may be less. Date Night, the #1 film, did $9.3 million Friday on approximately 4,600 screens for an average of $2021, or $2756 if you’re going by “engagements.”