I spoke early this afternoon with Vikram Jayanti, director of The Agony and the Ecstasy of Phil Spector, which I reviewed at length last weekend. I left my Canon Elph at the Soho House last night so I was forced to use my iPhone 4. I’m now sitting in a noisy Starbucks without my earphones, so I don’t even know how loud or clear the sound is. Whatever — these two clips represent most of our 19-minute chat.

Jayanti emphasized that he didn’t choose to make an Errol Morris film that would bore deeply into the particulars of Spector’s guilt (or possible innocence) in the death of Lana Clarkson. He believes, however, that there is an area of reasonable doubt as to whether Spector shot Clarkson or not. I believe that at worst the shooting was a stupid accident. (In the video Jayanti passes along a rumor that I hadn’t heard about Clarkson and handguns that I’d rather not repeat it in print.)

Jayanti reports that the jailed Spector is being kept in solitary except for a half-hour per day of exercise, and that all he has for diversion is a lousy black-and-white TV set and that he’s basically “in hell.” He also reports that Spector got into a fracas with some Latino guy and that the guy punched Spector and knocked his front teeth out.

If you were to regard “Spector” as an acronym, what would the letters stand for?

I saw David Slade‘s Eclipse (Summit, 6.30) at last night”s Manhattan all-media screening. Whoo, boy. The first wave of Eclipse commenters who said it’s better than New Moon didn’t lie — it is. Somewhat. But it’s still not good enough to matter. It’s a slow, boring, unimaginative, tediously written slog and is not — repeat, not — better than the first Twilight film. 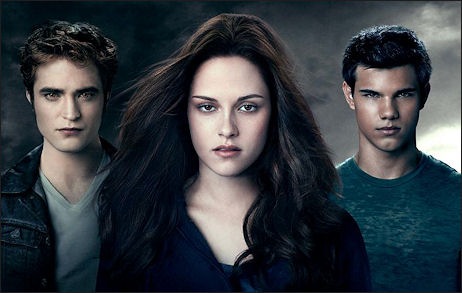 It’s not “organic” in the slightest, as Indiewire‘s Anne Thompson recently said. It’s about a bunch of young actors with bad wigs and conspicuous vampire makeup standing around trying to look captivating and speaking stiff soap-opera dialogue and going through the paces because they’ve been well paid to do so. It’s Fake-itude Incarnate. It doesn’t groove or flow or put the hook in even slightly. Okay, it does here and there. I’ll give it that.

Some young women in the rear of the balcony went “whoo-hoo!” when Taylor Lautner and/or Robert Pattinson did or said something sexy with Kristen Stewart. I didn’t understand why because this movie is in and out, at best. And mostly out.

I have to protect you, Bella. Here…hop on my motorcycle. I can protect you better than he can. We can deal with the The Newborns. All you werewolves need to meet us in the forest so we can train for the coming battle. I’m gonna die and become a vampire. Mom? Don’t count too much on having grandkids. Feel my warm heart beating inside my naked muscle-toned chest. Edward isn’t even alive. My feelings are hard to express but this is kinda how I’m feeling…I think. Isn’t that what finally matters? What we feel, who we love, and…like, you know, how much money this movie makes?

Why does Bella even hang with Jacob, knowing as she does that it just tortures Edward? What is this ‘torn between two lovers’ shit when she doesn’t really want Jacob in the first place? Why am I polluting my intellect by even thinking about this stuff?

I’ve had it with the faux-creepy milieu, those forests, Jacob’s torso, those werewolves, Edward’s glistening skin and red eyes, Bella’s anxious expressions and her dad’s idiotic urgings that she hang out with Jacob instead of Edward, and the whole teen angst vibe. Do these kids know how bad this dialoge sounds? Have they ever heard of Search for Tomorrow, General Hospital, The Secret Storm, etc.?

I sat next to a plump, big-haired Latina mom and her similarly proportioned daughter. As soon as they arrived and sat down the mom asked what her daughter wanted at the candy counter and said, “Okay, be right back.” She returned nine or ten minutes later with two family-sized Twizzlers, two medium-monster popcorns, two extra-large drinks and a hot dog. I tried not to listen to the sounds of their eating.

Some younger actors just can’t find their way into the zen of talk-show banter. They try to go with it, but they can’t find the groove. All I know is that every time Kristen Stewart goes on Late Night with David Letterman, something goes wrong. And what’s with that wolf-dog and those yellow eyes?

In a 6.27 interview with the Telegraph‘s Tom Teodorczuk, I was asked to explain reasons for the success of Toy Story 3. One of them, I said, is that the film “is a love letter to how Americans like to see themselves. Toy Story 3 is all about the constants we’d like to have in our lives — loyalty, love, standing by our friends, and caring for those close to us. It’s telling us what we want to believe in ourselves whether it’s true or not. It’s delivering in a very persuasive and cool way an agreeable, comforting myth about who we are.”

If I was George Hickenlooper, I would somehow find the dough to shoot some footage of Kevin Spacey‘s Jack Abramoff working in a Baltimore pizza parlor, and use it as a bookend device. It would make an already snappy and mordantly funny film just a little bit better. For what it’s worth, I like Bagman as a title better than Casino Jack.

If you were Emma Watson and you had the pick of the litter, would you choose George Craig, a skinny, so-so looking musician (notice how the camera never gives him a close-up) with a not-very-catchy voice and a 1965 Mersey Beat haircut? And then costar in a nothing-special music video to promote his band, One Night Only, and their song, “Say You Don’t Want It”? Never sleep with a lesser — always go lateral or better. Or at least find a bird with similar feathers.

Wait a minute…what? I’ve been reading report after report about how the feds approved box-office futures last Monday and it was all good to go, and then wham — it was revealed this morning that Cantor Fitzgerald, the chief proponent of box-office futures along with Media Derivatives, is folding the futures tent in the face of a “likely government ban on such trading.”

L.A. Times staffer Ben Fritz reports that “with financial reform legislation that would outlaw trading in box-office futures headed toward final passage, the company is giving up on its plans, said Richard Jaycobs, the executive heading the effort for Cantor Fitzgerald. ‘The broader opportunity of motion picture finance is still something we have to evaluate, but we know now we’re not going to do futures contracts,’ he said. ‘The bill is quite clear.'”

Big-time Hollywood corporates have argued all along that a potential box-office futures markets could generate bad buzz for movies before they’re released, plus they “would be too easy to manipulate,” Fitz reports. “Backers have said they would be a useful financial tool for film investors.

“Jaycobs’ decision is a major defeat for Cantor, which in 2001 acquired the Hollywood Stock Exchange — an online game that lets players bet play money on box-office predictions — to help prepare for its move into real box-office futures.”

Maybe the studios will ease up now about circulating box-office tracking reports online and we can all go back to where things were before.

Elena Kagan‘s rep as a brilliant and exacting legal mind preceded yesterday’s appearance at her Supreme Court confirmation hearing, and now she has shown herself to be political and gracious and gentle-mannered. It’s also clear that she’s dropped a few pounds and has let her hair grow out so she looks a little less dykey — smart moves. And I love her Zabar’s accent.