Apart from its reportedly strong entertainment value, exhibitors are doubly delighted with Phillip Noyce‘s Salt because of its 95-minute running time (plus titles), which obviously allows for more shows per day than the 148-minute Inception. Five or six 11 am-to-midnight shows daily vs. four, not counting midnighters. What’s the shortest action thriller ever released? I’m asking.

The Boston Herald‘s Stephen Schaefer, fresh from this weekend’s Washington, D.C. Salt junket, has called it “the best damn thriller I’ve seen in years. Noyce once again nails the political thriller, mixing high octane action with, as we’ve learned from recent headlines, real-world spy issues. Angelina Jolie stars/scores as CIA operative Evelyn Salt, on the run as an accused sleeper cell Russian agent who attempts to stop an assassination and regain her security clearance. Like Lisbeth Salander, she rates as an irresistible fantastical creation in a realistic milieu.”

Opening opposite Salt and Countdown to Zero on 7.23 is Christian Carlon‘s Farewell, a fact-based espionage drama involving Russian secrets funneled to the French, and set in the early ’80s. There’s an immediate Day of the Jackal/Smiley’s People vibe from the trailer. It played in Telluride last year. An intriguing John Anderson piece in the N.Y. Times got me started.

Only one screening in Manhattan so far, and another I’ll miss on Wednesday. (I’m trying to snag a screener as we speak.) I’ve never even heard of the distributor, NeoClassics Films, and a well-connected LA friend couldn’t find any screening invites in his inbox.

The beginning of Phillip Seymour Hoffman‘s Jack Goes Boating (Overture, 9.17) “isn’t terribly made or horribly off its game,” I wrote last January. “It establishes an amiable, easy-going tone with dabs of low-key humor, but I really, really didn’t want to hang with Hoffman’s Jack, an oafish Manhattan limousine driver. Jack is pudgy — okay, fat — and rumpled and conversationally slow as molasses. He wears a dim and drowsy expression, and seems borderline stupid and to some degree emotionally shut down.

“‘I don’t like this guy — he’s too doltish,’ I muttered to myself. And the humor, as I heard it, conveyed a kind of low-energy flatness, reflecting the perceptions of people with somewhat diminished capacities.

“And then came a scene between Hoffman and Amy Ryan, portraying a plain girl named Connie whom Jack is interested in, and costars John Ortiz and Daphne Rubin-Vega. It ends with Hoffman telling Ortiz that Ryan wants to go boating sometime, and Hoffman explaining that this might not work because he can’t swim. And then Ortiz mentions that he could teach Hoffman to swim at an indoor pool he’s been to.

“That was it — I wasn’t going to watch Hoffman in bathing trunks. He’s been getting more and more corpulent lately, and it just makes me feel badly for the guy. I want him to be Capote-sized for the rest of his life. I’m sorry. I’m really not trying to be an asshole. It’s quite possible that Jack Goes Boating will be called a decent-enough film by critics and festivalgoers I respect. I just didn’t want to be in that world so I left. I’m sorry.” 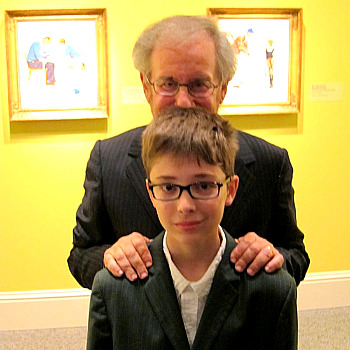 Last night around midnight MCN’s David Poland tweeted that Deadline‘s Nikki Finke had written him the following message: “YOU ARE BEING SUED (INCLUDING FOR YOUR DEFAMATORY TWITTERS) NO MORE DELAYS. THAT’S IT.” More bluster and brimstone, or does she really mean it this time?

We all know about harsh judgments from Rabbi Dave, but if legal action results he’s clearly the Good Guy and Finke is not. The matter will never go to court, but it would be delightful if it did. It would be like the O.J. trial — the whole town would be watching. If I was the right kind of attorney I’d be calling Poland right now and insisting that he allow me to represent him pro bono.

On 6.17 Poland wrote that “it’s only been a couple of weeks since Nikki [Finke] last threatened to sue me, using the full might of Jay Penske‘s attorneys. Unfortunately, what I tweeted about her was factually accurate (as every factual statement that I have ever written about her has been), so her claim was limited to the notion that she is not a public person and therefore I was…well, I don’t even know what legal leg she was pretending to stand on.”

One of his stronger anti-Finke rants ran on 3.23. I wrote a day later that Poland “makes some good points; the writing is very clean and straight because he’s not hemming and hawing in the least. He’s not afraid of being Finke’s enemy, and I admire the ballsiness in that.”

Two nights ago at Houston’s Angelika Film Center, one of the stars of Restrepo — Sgt. Misha Pemble-Belkin — dropped by for a q & a. The following day Culturemap‘s Joe Leydon (who may or may not have conducted the interview with Pemble-Belkin) posted an admiring account of his visit. 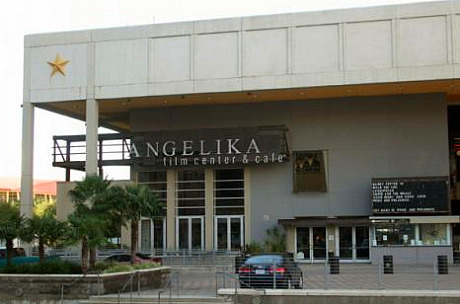 Restrepo is a narrowly focused, bravely captured documentary about U.S. troops fighting in Afghanistan’s Korangal Valley from ’07 to ’08. Pemble-Belkin, now stationed at Louisiana’s Fort Polk, was one of those interviewed and befriended by co-directors Sebastian Junger and Tim Hetherington during their year-long stay.

For my money Leydon’s article seems a little too obliging, primarily because it mentions but doesn’t begin to explore an idea that’s been seeping through here and there, which is that Restrepo is a pro-war, support-the-troops, emotional-propaganda piece wrapped in allegedly neutralist observational verite clothing.

The apparent bottom line is that Junger and Hetherington, like many embedded war journalists before them, “fell in love” with their subjects, and in so doing evolved into supporters of the U.S. Afghanistan campaign. It seems as if they were unable to separate their feelings for the troops and the war that has taken the lives of over 1000 Americans. It’s been reported that Junger has recently been pushing a stay-the-course policy on news talk shows.

Pemble-Belkin obviously knows whereof he speaks and has an absolute right to say what he’s learned and believes about the war in Afghanistan. But reading that he wants to stay in the Army “until we win the war…I don’t want it to go on until my children are old enough to have to go over there” made me furious.

“Win” in Afghanistan? We’re not even stalemating over there. The effort is doomed and we’re on a timetable to evacuate. On top of which the movie doesn’t even explain that U.S. military command pulled out of the Korangal Valley last fall because they could see it was a losing effort. 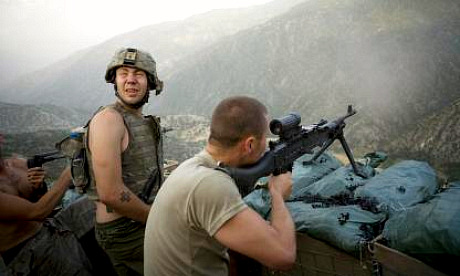 It is bothersome that Leydon, the good host and gentle inquisitor, doesn’t even tip-toe into this, much less address Pemble-Belkin’s delusion that we might “win” over there. And yet he lets him get away with “politely but firmly” declining to answer “what he calls ‘political questions.'”

Let me explain something. Everything involved in the fighting of a war is political, and all questions about any aspect of that war, including a friendly documentary that presents a highly selective, grunt’s-eye view, are political. And anyone who stands up for the honest but restricted reporting in Restrepo is standing up for its roundabout pro-war stance. So Pemble-Belkin driving from Ft. Polk to Houston on a motorcycle to take part in the Angelika interview, was, in every sense of the term, a political act. Because in so doing he’s taking part in the Restrepo smokescreen, which is the filmmakers trying to pretend that it’s not political by focusing solely on the day-to-day lives of soldiers and saying, “Isn’t it fascinating and touching the way these guys just hang in there and do their job and survive and shit?”

Never trust anyone who says he’d rather not get into political questions. That’s a total chickenshit dodge.

Here’s how I put it in an HE piece called “Afghanistan Bananistan“:

“The kind of frankness that Restrepo is offering is, to put it mildly, selective. For realism’s sake Restrepo chooses to isolate its audience inside the insular operational mentality of the grunts — ‘get it done,’ ‘fill up more sandbags,’ ‘ours not to reason why’ and so on. In so doing it misleads and distorts in a way that any fair-minded person would and should find infuriating. Is there any other way to describe a decision to keep viewers ignorant about any broader considerations — anything factual or looming in a political/tactical/situational sense — that might impact the fate of the subjects, or their mission?

“Imagine a documentary about the day-to-day life of Steve Schmidt, John McCain‘s ’08 presidential campaign manager, that ignores how the campaign is going and instead focuses on Schmidt’s relationship with his family and his dentist and his kids’ homework and his visits to a local cafe and his dealings with the guy who mows the lawn once a week. What would you call that approach? Thorough? Honest?”