95 minutes after my L.A. arrival I was speaking with Ophelia Lovibond, whom I took an instant shine to when I saw her in Sam Taylor Wood ‘s Nowhere Boy, which the Weinstein Co. still hasn’t released. (It’ll open domestically on 10.8) So Joe Popcorn doesn’t know Lovibond at all. 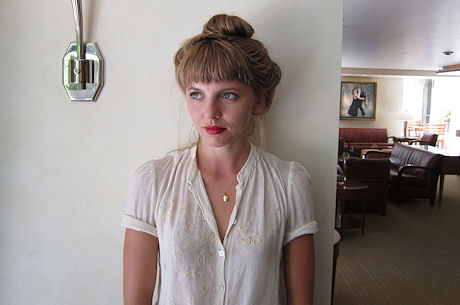 But the fact that she was chosen to costar in William Monahan‘s London Boulevard (which she says will open in November) and Ivan Reitman ‘s Friends With Benefits makes her, at the very least, an “industry” favorite — i.e, a name, a comer, a significant presence perhaps on the way to bigger and better things.

I have to do another interview right now but I’ve read Monahan’s London Boulevard script and I know Lovibond’s character, “Penny”, and I suspect (though I obviously don’t know) that her performance in this character-rich crime drama will do good things for her, and perhaps even put her on the road to snagging a lead role in a significant, grade-A film. We’ll see.

“Every so often an actor or actress you haven’t noticed before will just catch your eye,” I wrote on 10.30.09. “It helps if they can act, of course, but movie cameras just like certain people. And right away you’re thinking you’d like them to stick around. For me, this happened when Ophelia Lovibond came on-screen in Sam Taylor-Wood’s Nowhere Man. I should have made some noise about her in my 10.29 review but I didn’t know her name. (The press notes weren’t much help.)

“She’s in two scenes with Aaron Johnson (who plays John Lennon), one of them an outdoor quickie sex scene. Lovibond — curious name — has a certain directness, a straight-from-the-shoulder quality. And she has Liz Taylor eyes.” 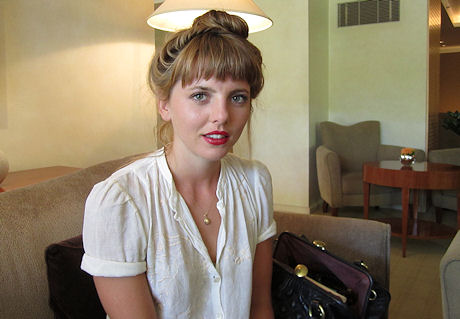 I’m about to catch a flight from Oakland to Burbank. A busy day awaits. A chat with Ophelia Lovibond (Nowhere Boy, London Boulevard) at 3 pm, an interview with Salt director Phillip Noyce at 6 pm, and then a dinner at 8 pm.

N.Y. Times columnist Frank Rich has written a tasty retro-bashing of Mel Gibson‘s The Passion of the Christ in today’s edition, “The movie was nakedly anti-Semitic, to the extreme that the Temple priests were all hook-nosed Shylocks and Fagins with rotten teeth,” he states. “It was also ludicrously violent — a homoerotic ‘exercise in lurid sadomasochism,’ as Christopher Hitchens described it then, for audiences who ‘like seeing handsome young men stripped and flayed alive over a long period of time.’

“Nonetheless, many of the same American pastors who routinely inveighed against show-business indecency granted special dispensation to their young congregants to attend this R-rated fleshfest.

“It seems preposterous in retrospect that a film as bigoted and noxious as The Passion had so many reverent defenders in high places in 2004. Once Gibson, or at least the subconscious Gibson, baldly advertised his anti-Semitism with his obscene tirade during a 2006 D.U.I. incident in Malibu, his old defenders had no choice but to peel off.”