Two years ago I said Michael Cera would be “completely done within two or three years.” Was I right ? Maybe not. Cera could still be kicking around in 2012 and beyond. But an 8.23 box-office analysis article by TheWrap‘s Brent Lang, called “Five Reasons Scott Pilgrim Tanked,” suggests that swirling gray clouds are forming.

“Scott Pilgrim‘s fate may have been sealed the moment Michael Cera nabbed the lead role,” Lang says halfway through.

“Cera may have had a hit with Superbad and Juno, but the credit there may lie with Judd Apatow and Diablo Cody, respectively.” (And Jonah Hill in the case of Superbad.) “Films with Cera’s name above the title since have all bombed,” Lang claims. “Year One earned $43.3 million, Youth in Revolt netted $15.3 million and Nick and Norah’s Infinite Playlist grossed $31.5 million. Like Scott Pilgrim, all the these films featured Cera as a mumbling, geeky, and virginal protagonist.

“‘Aside from recasting, I don’t know what they could have done,’ an individual with knowledge of the marketing campaign told TheWrap. ‘I don’t know why or when this occurred, but somehow this industry became convinced without any evidence that Michael Cera is a star. Who wants to hang out with this guy? He’s the kid you shoved in a locker.'”

Oldie but goodie, taken about ten years ago. I’m the guy doing the stroll. 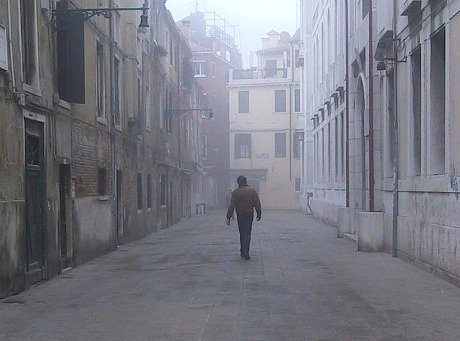 Right off the bat this trailer for Gareth Edwards‘ Monsters (Magnolia, 10.29) suggests District 9. Which obviously encourages. The Mexican locations (actually Costa Rica, Guatemala, Mexico and Texas), the scattershot cutting, the raggedy-ass look…you can just tell. The only thing that gave pause was the “awesome!” quote from Ain’t It Cool. It’s almost an Armond White thing with those guys. If they’re batshit over a new film, there’s a decent chance I may not be.

Last Saturday afternoon (or 29 stories ago), I dismissed Michael Cieply‘s hit-job piece about The Social Network as being a so-whatter. (It was titled “Facebook Isn’t Happy…So?”) Yesterday New York Post critic Lou Lumenick challenged the article for being scantily or insufficiently sourced.

An 8.21 Denver Post article about films starring female action heroines underlines a basic fact — women are simply not big or strong enough to defeat male opponents in hand-to-hand combat. They can wound or cripple but they cannot kick real-life butt unless their male opponent is some Woody Allen– or Arnold Stang-sized guy. Even larger-proportioned women just don’t have that upper-body-weight advantage.

Which means that it’s doubly ludicrous to see slender, smallish women like Angelina Jolie and Chloe Moretz deliver serious ass-stompings to male opponents, some of whom are bigger and brawnier with gorilla-sized arms, legs and feet.

There are dozens of ways female action stars can go bad-ass in movies (cops, assassins, soldiers, spies, MOSSAD agents, CIA agents, homicide detectives) but they really aren’t that good at beating up most guys — not in real life, they’re not. And if you ask any guy out there the suspension-of-disbelief required to buy into this is just too much to ask for. The knock-downs that Salt‘s Jolie and Kick-Ass‘s Moretz have handed out (among others) are pure hokum.

Does this mean they’ll eventually cease? Laughed off the screen by popular demand? Of course not. I went with Salt because it was so well put together, so as long as there’s a clever director at work these films will seem semi-palatable. On top of which they seem to fulfill a fantasy. Women enjoy female action stars demonstrating physical superiority over male opponents…right? And so these kick-butt sequences will continue to happen in the same way every superhero gets to jump off buildings and ignore gravity. Action has been ruined by the mid’ 90s Hong Kong influence and CGI, but no one seems to care all that much.

Film critic Lisa Kennedy , author of the Denver Post piece (which is called “Beauty Meets Brute Force“), almost says what I’ve just said in the previous four graphs, but not quite.

The process of deciding which Toronto Film Festival films are essential to see has begun. I’m starting with a list of 44, out of which I’ll have to lose at least 10 if not 12 or 13. (My festival average is 3.5 films per day x 9 days = 31 films.) Here’s the complete list, courtesy of Indiewire. The goal isn’t to deliberately bypass special films, but to absolutely not miss those familiar elements (recognizable names, likely award-season contender status) that will translate into various levels of heat in the weeks and months to come:

It’s official — William Monahan‘s London Boulevard, which I wrote about at length two days ago, will not play the 2010 Toronto Film Festival. It wasn’t included in today’s announcement about final inclusions so that’s that. As my piece implied, something’s not quite in order.

That said, my London source wrote this morning and said he’s been “reliably told that the film is now complete and that it’s not a dud…I gather there are US distrib talks ongoing as we speak.” He also informs that the IMDB UK release date of 10.15 is incorrect. “There’s no release set for the UK at all.”

Charles Ferguson‘s Inside Job “is a highly absorbing, meticulously composed hammer doc about the causes of the ’08 financial meltdown,” I wrote in a 5.15 Cannes review. “Most of us have some kind of understanding of the whys and wherefores, but Ferguson lays it all out like a first-class table setting and makes this titanic crime seem extra vivid.

“The American public was robbed blind and is still being made to suffer by an arrogant den of thieves, and the enormity of their power-corridor hustle is almost too vast and labrynthian to comprehend. But Ferguson’s doc makes it more comprehensible than in any presentation I’ve seen thus far. Every Average Joe and tea-bagger needs to see this film at least twice and take notes each time.

“Inside Job is brilliant, perceptive, very well organized, necessarily angry or at least confrontational, and narrated by Matt Damon. And great looking — the gleaming, superbly lighted, crystal-clear lensing by HE pally Svetlana Cvetko and the gifted Kalyanee Mann is easily the most handsome and lustrous I’ve seen at the festival so far.”

In the responses to yesterday’s “Five Phone Messages” piece, which was about producer Scott Rudin‘s plan to produce a 9/11 movie based on Jonathan Safran Foer‘s Extremely Loud and Incredibly Close, crazynine stated that “all media somehow colluded to eliminate each and every image and film still of WTC jumpers from public memory.”

Here’s another aspect of 9/11/01 that you’ll never hear anyone talking about. Reason? It’s simply not allowed. And despite the obvious logic behind it, anyone who brings this up will be slapped down so hard and fast they won’t know what hit them. Ready for it?

It’s about the people in the north and south towers who tried to get out via the fire-escape stairwells but were prevented by two significant slow-up factors. I’m not a 9/11 authority by any means, but I’ve read a good amount about it, and what I’m stating here will seem fairly obvious to anyone who’s tried to move through a dense crowd.

It wasn’t just those Port Authority honchos telling people in the north and south towers to stay in their offices that cost many, many lives (as they dissuaded people from trying to get out of the building by going down the stairs). The ability of people to escape from both buildings was also hindered by the bodies of NYC firemen trying to make their way upstairs. That sounds like an awful thing to say, I know, but isn’t it common knowledge that NYC firemen, brave and gallant to the last, trudged up the stairs of both towers (particular the north tower, which didn’t fall as quickly as the south) to lend whatever assistance they could to people on the upper floors and/or do what they could to put out fires? Isn’t it logical, given this, that their presence on the stairs also made the journey of any person looking to escape (the north tower especially) much slower? It had to.

I remember reading in one of the 9/11 accounts that the fire-escape stairwells were so crowded, particularly the north tower stairwells (which were usable for a much longer period), that it took an average individual approximately one minute to make his/her way from one floor down to another — 60 seconds per floor! So if you were trying to get down, say, from the 70th floor at a certain point that morning, you were looking at a 70-minute trip. If you were on the 60th, an 60-minute hike. On the 50th, a 50-minute journey. Meaning that a lot of people didn’t make it out because of this slow movement.

It’s horribly ironic, but how can it not be true? If the stairs didn’t have a bunch of super-brave fellows with heavy equipment slogging up the stairs en masse, more people might have lived. Doesn’t it stand to reason that the many were slowed down to the point that they never made it out?