The following conversation actually happened about three hours ago. I didn’t record it, but this is a fairly precise recollection. It was between myself and a Manhattan p.r. guy who knows everyone and everything and has been around the track dozens of times. 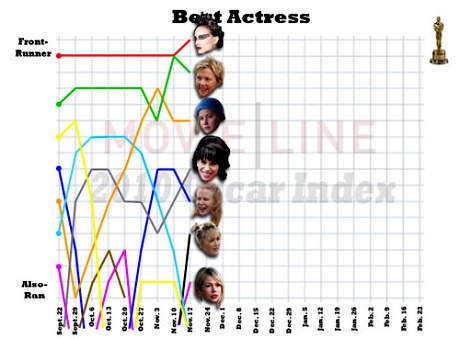 N.Y.-Based Publicist: And look what they’re doing to Annette! They’re running Julianne Moore for Best Actress right alongside her, and they’re going to cause Annette to lose all over again.

Hollywood Elsewhere: But they’re not really running Julianne. I mean, they “are,” sort of, but not really.

N.Y.-Based Publicist: Of course they are! They’re running them side by side. Annette and Julianne.

Hollywood Elsewhere: Well, the thinking — and I understand this from a political sense — is that they don’t want to offend or alienate either party. Bening and Moore are equal costars, after all, with the same weight and pathos in that film, and so they’re running them as equals.

N.Y.-Based Publicist: Look, do they want to win the Oscar or not? If they don’t make it a pure Annette thing, you watch as Natalie Portman just gets stronger and stronger. And you can feel it out there. It’s happening right now.

Hollywood Elsewhere: I’m just worried about Lesley Manville. I realize it’s too late and they’ve made their decision to run her for Best Actress, but if she was running for Best Supporting Actress she’d wipe the floor.

N.Y.-Based Publicist: No, she wouldn’t.

Hollywood Elsewhere: Oh, come on! She’s gonna coast in on the coattails of The King’s Speech, you mean?

N.Y.-Based Publicist: That and her history. Howard’s End, Fight Club, Sweeney Todd, A Room With A View, the Red Queen in Alice in Wonderland.

Hollywood Elsewhere: I see. A career-tribute Oscar. Because…you know, she’s very dry and fine in The King’s Speech, but in and of itself her performance is nothing to do handstands over.

Hollywood Elsewhere: It should. Because in a one-on-one between these two on the strength of performance alone, Lesley Manville would take it hands down.

Marshall Fine has suggested “one final marketing idea” for the Harry Potter franchise, to wit: “Once Harry Potter and the Deathly Hallows, Part 2 runs the course of all its platforms (theatrical, pay-per-view, DVD, TV), Warner Bros. should release both films on YouTube along with some rudimentary editing software – and hold an editing contest for everyday moviegoers.

The idea, of course, would be to “see who can best reduce the overlong segments of the two-part film into one coherent final movie. Then put that one out in theaters and all the other platforms. And include it in the inevitable completist’s box set of all the “Harry Potter” films when that becomes a stocking stuffer of the future.” 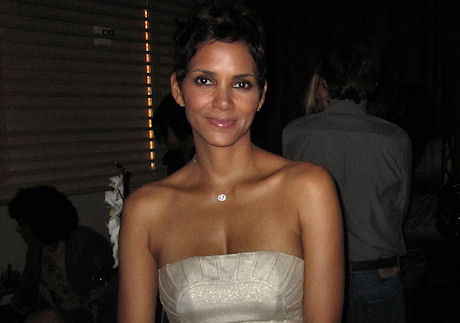 I explained to Halle Berry at last night’s Rouge Tomate party that I couldn’t see Frankie and Alice , her new film, because I felt I needed to attend Scott Rudin‘s Ronni Chasen memorial

that happened earlier that evening at Michael’s. She said I made the right choice. I’ll be seeing her film with a SAG group at 7:30 this evening. 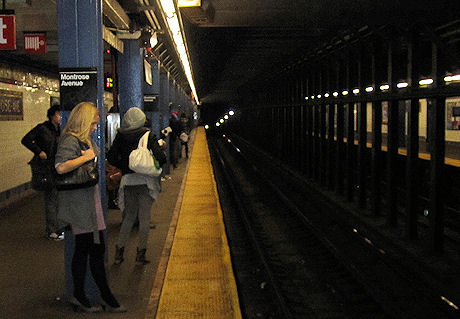 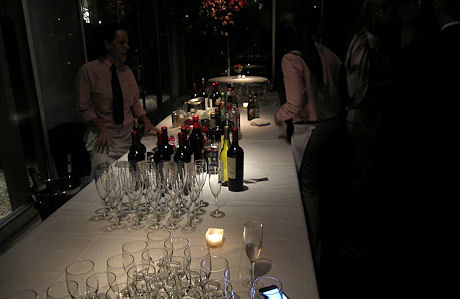 I turned the sound down after a minute or so, and then turned it off at the two-minute mark. What an awful sound. I’m not sure why I’m even posting this, but Film Drunk‘s Oliver Noble has a strong tolerance.

This is a very minor clip from Banksy’s Exit From The Gift Shop, which has just made the cut as one of the 15 short-listed. The doc is mainly about Thierry Guetta, a free-spirited Frenchman based in Los Angeles, and his obsession with becoming a street artist in the vein of Banksy and/or Shepard Fairey. And so they release a clip of an altercation between Fairey and the fuzz near the Hollywood sign? 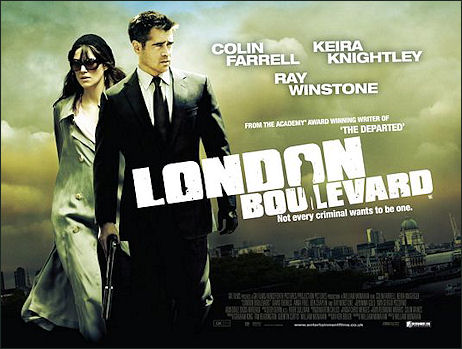 Everyone presumably remembers Joe Queenan‘s 7.28 Wall Street Journal piece that called 2010 the suckiest movie year ever. No surprise hits, no out-of-nowhere dark horses, and no cunningly hyped film “that either exhumes a noted actor from the grave or greases the skids so some solid journeyman can ascend to the ranks of the Oscar Winners of yore.”

Here it is three and half months later and Queenan looks like a shoot-from-the-hipper with egg on his face. If anything 2010 is feeling more and more like an avalanche of riches — The Social Network, Black Swan, Inside Job, The King’s Speech, Inception, Blue Valentine, 127 Hours, The Tillman Story, Toy Story 3, Biutiful, etc. David O. Russell‘s The Fighter may not be an out-of-nowhere dark horse, but it sure is a hot late-season arrival. The Social Network has clearly greased the skids so that solid journeyman David Fincher is now looking like the most likely recipient of the Best Director Oscar. And if you want a surprise hit, look no further than Ben Affleck‘s mystifying popular The Town.

And what about the praise that continues to be showed upon Banksy‘s Exit From The Gift Shop? And the sudden and surprising critical embrace of Matt Reeves‘ Let Me In (despite the idiotic general-audience response). And the punch-through accomplished by Olivier Assayas‘s epic-sized Carlos? And the avalanche of world-class docs besides those already mentioned? Cave of Forgotten Dreams, Client 9: The Rise and Fall of Eliot Spitzer, Countdown to Zero, Tabloid, Restrepo, Joan Rivers: A Piece of Work and Smash His Camera.

On Tuesday, 11.16 Radar Online quoted Inferno director Matthew Wilder as saying he’s basically ready to pull the plug on Lindsay Lohan portraying Linda Lovelace. “Although [Lindsay] is still our number one choice, we do have a Plan B if she cannot film Inferno,” he said, alluding to possible longer-than-anticipated court-ordered rehab requirements. “[Because] we have had a great response from other people who really want the part too.”

In other words, Wilder has probably chosen Lohan’s replacement.

So that’s it — Lohan will have to rejuvenate her acting career in some slightly less humiliating way. As A.V. Club’s Sean O’Neal noted yesterday, “The news probably will come as some relief to Lohan once she sobers up and realizes that her life was once in such disarray, she was considering smearing semen on her face and fucking a dog as a way of relaunching her acting career.” Consider some of the lines that Lohan would have said if she’d actually played the part.

Last July Wilder promised he would delay production until Lohan’s release, issuing the following statement: “This is a sad chapter in the ongoing tragicomic circus between the tabloid media and the ‘justice’ system. An outrageously outsized sentence garners attention for all the players involved, but brings only sadness to the poor soul who has to serve it. I am 100% behind Lindsay and can say the same for everyone involved in the production of Inferno: A Linda Lovelace Story. Indeed, we are proud to have this remarkable artist work on our film.

“And as for the haters relishing this moment, I can only quote Jesus in The Last Temptation of Christ: ‘And those who are laughing now…will be crying after.'”

I was led to Jonathan Levy‘s hip-hop Yakuza trailer (posted roughly seven months ago) after writing Tuesday’s “Japan-phobia” piece. It doesn’t blow you away, but Levy at least reminded why Sydney Pollack‘s 1974 Japan-set crime thriller is one of the best of its kind. Plenty of swords and robes and flesh-slicings, but with a tone of existential cool. You have to use restraint and watch the fetishy stuff when visiting Japan.

The Yakuza Trailer from Jonathan Levy on Vimeo.

This other Levy trailer, a celebration of Jacques Tourneur‘s Out of the Past, isn’t so hot. It starts out beautifully with those flash-impact titles, and then cuts to that brilliant image of a trench-coated Robert Mitchum framed by vertical iron bars outside Kirk Douglas‘s Lake Tahoe mansion. And then it falls apart. Just a series of visceral, raggedy-ass, occasionally slow-mo clips that emphasize the primal and ignore the undercurrent. Out of the Past is a bitter and profoundly sad film about fate and resignation, and yet Levy’s trailer seems to go out of its way to ignore that. Fail.

OUT OF THE PAST Trailer from Jonathan Levy on Vimeo.