Disney doesn’t want under-30s seeing the original Tron for fear of killing enthusiasm for Joseph Kosinki‘s TRON: Legacy, hence the decision not to put it out on Bluray as a promotion for the new model. Too rickety and old-fogeyish. How long will this clip last on YouTube then?

I tried to explain yesterday why I believe the great Lesley Manville can’t hope to prevail in the Best Actress category, but that she’ll rule or certainly be a leading contender within the Best Supporting Actress realm.

I know this sounds obsessive, but I’m asking other conversation-starters to kick this around once more (as Rope of Silicon‘s Brad Brevet did on 10.27) in hopes of inciting an Academy groundswell that might result in a nomination that will do Manville and Mike Leigh‘s Another Year the most good.

A voter revolt happened before when they were being urged to nominate Kate Winslet as Best Actress in Revolutionary Road; they put her up instead for Best Actress in The Reader. Okay, it’s not the same thing but voters aren’t obliged to follow suggestions made in trade ads. They can do anything they want.

I only know that putting Manville into Best Actress contention, sublime as she is, is almost a sure-fire way to make her lose. It’s just not in the cards. There’s even a feeling that Manville may not even be nominated in the Best Actress category, even if one or two major critics groups step into the breach. But she’s almost certain to be nominated in the Best Supporting Actress category, which has fewer formidable competitors. In my book (and in the book of anyone who believes, however naively, that quality of performance should be a major determining factor) she damn well ought to win in this arena.

These are two of the Buzz Bee illustrations found on Badassdigest.com. I don’t know if there are others besides these two, but obviously they have different skin tints. The thumbs-up bee on the left looks like he’s being held up and is begging the thief not to shoot him. The thumbs-down bee looks nauseous for a reason other than having just seen a bad film. Plus his antennae bulbs are three times bigger than those belonging to the thumbs-up bee. 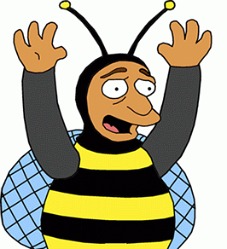 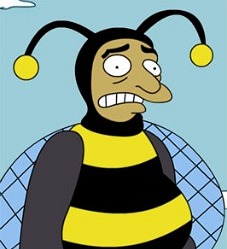 Yesterday Badassdigest.com’s Devin Faraci assessed the junket buzz on TRON: Legacy, which was shown on Thursday night (and probably again last night): “The people who saw it were heavily embargoed, but they’re also mostly fanboys and, frankly, easy lays for this movie, so I expected to see lots of folks on Twitter just skirting the embargo. But there was silence. Utter silence. Never a good sign.

“I did some asking around and while there are folks who are very positive on the film, most of what I heard back was ‘looks great, everything else is terrible.’ The script, I have heard, is especially atrocious. And this comes from some folks who I thought would for sure be huge fans of the film no matter what.”

Tony Scott‘s Unstoppable “fell 49% this weekend…what happened?,” I asked a friend this morning. His answer: “No movie was able to weather the Harry Potter storm — it’s as simple as that.”

Really? So whatever the Unstoppable word-of-mouth, it’s moot because of Harry Potter and the Deathly Hallows, Part 1? How does that work exactly?

Factor in the Thursday midnight showings, and Harry Potter and the Deathly Hallows, Part 1 earned an estimated $61.2 million in 4,125 situations. It’s expected to bank $130 million by Sunday night.

We are Warner Bros. We make the Potter films and you are the lemmings. We do what we want to do according to our paychecks and our determinations. We are the masters making the rules for the wise men and the fools.

What if you blended the zen-repetition theme of Groundhog Day with a formula thriller about terrorism, high-tech surveillance, surreal software (“a computer program that enables you to cross over into another man’s identity in the last eight minutes of his life”) and the like? This seems to be the essence of Duncan Jones‘ Source Code. The trailer, however, is telling us that the film has problems.

One, I explained last summer that guys bolting upright all anxious and bug-eyed and going “whuh!” is a cliche that has to be stopped, and here’s Jake Gyllenhaal doing more or less the same thing (on top of Daniel Craig waking up with a jolt in that just-released Cowboys & Aliens trailer).

Two, the CG for the train explosion is atrociously fake-looking. Yes, I realize that the CG will be refined as the release date approaches, and that this only represents how the CG looked a month or two ago. But those Roadrunner vs. Coyote cartoon flames still take you right of it.

Three, Gyllenhaal is giving it hell but you can see right off the top that Michelle Monaghan doesn’t have that much of a part, and that she’s just punching the clock and collecting her check. And it also seems that Vera Farmiga and Geoffrey Wright are on total auto-pilot.

Four, Gyllenhaal is wearing one of those dreaded two-week bristle beards.

And five, as far as I’m concerned the directing hand of Duncan Jones (Moon) is not a comfort factor. I was mostly bored by Moon, certainly by the second half. What, I’m supposed to hop up and down for David Bowie‘s 29 year-old kid because he got a good performance out of Sam Rockwell?

This looks very rote, very big-studio factory. But it also contains little tiny echoes of Inception here and there, and if the idea of being able to repeat an experience over and over is used in a semi-thoughtful Groundhog-y way, then Source Code might have a chance. An IMDB guy who claims to have read the script says it’s “very, very in the vein of 12 Monkeys with a touch of Quantum Leap.” I have a copy of Ben Ripley‘s original ’07 script; Billy Ray did a rewrite, I’m told.

All I know is that right now this looks like soulless high-concept crap, pushed along by raptors in expensive suits.