If this was a film and Lindsay Lohan was playing a character like herself, listening to the warnings of a judge in court, I’d be geninely impressed. Because she’s not “acting” here, and yet her dolled-up face is a portrait of torrential contradictions. She’s nodding and going “yes, Your Honor” but it’s obvious she’s not there. She’s quietly livid because she’s finally begun to understand that her life is really and truly fucked. Lohan is a very fine actress, but in high-end Hollywood circles she’s seen as beyond repair.

I began reading Stu VanAirsdale‘s latest Oscar Index article in a state of profound excitation. An upset is coming? Really? Or may be coming at least? O joy! But my heart began to sink when I got to the third or fourth graph and I realized that VanAirsdale is just blowing confetti out of his ass and/or doing an air-guitar riff. Fake out! And back came the gloom.

John Madden‘s The Debt, an espionage thriller, will be distributed for Miramax by Focus Features and Universal Pictures International. Focus will open it in the U.S. on Wednesday, 8.31, and UPI will release the film internationally.

I could run this announcement as a boilerplate thing or fill things in with my opinion of the film. I just flipped a coin and it came up heads so here’s my 9.15.10 Toronto Film Festival review of The Debt‘s first 40 minutes:

“By the time I left, John Madden’s The Debt had administered several self-inflicted wounds. Bruises, scratches, cuts, scrapes — they kept coming non-stop. The biggest wince was realizing early on that all the actors — principally Sam Worthington, Helen Mirren, Tom Wilkinson, Ciaran Hinds, Jessica Chastain, Martin Csokas — had been urged to ‘act.’ There wasn’t a moment in the portion that I watched in which they didn’t seem to be (a) speaking lines and (b) using every thespian trick in the book to let us know how their characters are feeling. There’s nothing that kills a movie faster than this.

“I especially hate it when actors exchange ominous ‘looks’ in a scene. Looks in which actor says to another, ‘Are you sensing the same vibe I’m sensing?’ Or ‘I’m getting concerned about how things are going — how about you?’ Scenes in which an actor conveys his/her feelings about another by looking at them longingly or angrily or coldly or playfully are, for me, mute nostril agony.

“And I think it should be carved in stone that you can never have an older actor or actress be portrayed in a younger incarnation by another younger actor/actress, or vice versa. It never works, and always kills the movie in question.

“In this film — a thriller about three young Israeli Mossad agents who captured an Adolph Eichmann-like Nazi war criminal in mid 60s East Berlin, and their older selves dealing with lingering consequences — we are asked to believe the following pairs: (a) Worthington aging into Hinds — ridiculous, absurd; (b) Chastain aging into Mirren — laughable, in a pig’s eye; and (c) the 44 year-old Csokas, speaking with his usual bizarre New Zealand-by-way-of-Hungary accent, aging 40 years hence into the 61 year-old Wilkinson, his speech patterns utterly devoid of the Csokas patois.

“I felt angry and insulted. My feelings wouldn’t have been any different if Madden had come up to where I was sitting during the showing and urinated on my leg. There’s no getting over this aspect. It alone kills The Debt, although there were may other assists in this regard. I could describe four or five others but I’d just be describing variations on the same sprawling green lawn composed of identical blades of shit grass.”

As I said in early January, “Not every subway movie poster gets trashed but some do, and I’ve come to suspect that it means something when a certain poster gets the treatment. Spooky but true.” How concerned should Universal be that antisocial budding-criminal-class Manhattan teenagers have a problem with The Adjustment Bureau (3.4)? Perhaps it’s not even worth thinking about, but only certain posters seem to get defaced in the NY subway system, and there’s always a reason. 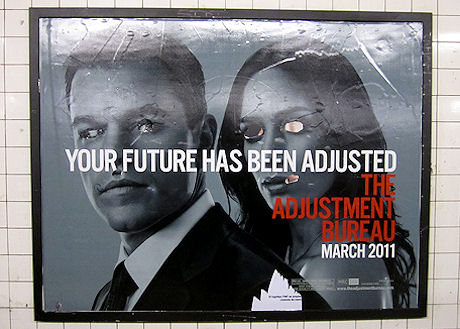 For what it’s worth, I can faintly sympathize with Nikki Finke‘s reportedly extreme discomfort with having a present-day photo of her circulated by Rupert Murdoch‘s The Daily. Last week I sat down with Gold Derby‘s Tom O’Neil and Paul Sheehan for an Oscar race discussion. When I saw the first portion of the video yesterday I almost fell out of my chair.

All I can think when I watch it is how I really have to (a) start up with 24 Hour Fitness again when I get back to West Hollywood and (b) drive down to Mexico for some affordable plastic surgery to fix those godawful bags under my eyes and and for my appalling turkey neck. It just sends me into a tailspin of depression. That bloated fuck in the video is not the guy I see in the bathroom mirror. Why can’t I age like Cary Grant did? Why can’t I at least look more like Todd McCarthy? I’m starting to resemble Albert Finney, for God’s sake.

I shared my sense of horror with O’Neil, and he told me to knock it off and that I look fine and that I’m paranoid, and that he should have told me sit up straight because my slumping created the illusion of a turkey neck I really don’t have, etc. It was nice of him to try and cheer me up.

I could’ve seen Peter Mullan‘s Neds at the Marrakech Film Festival last December, but a bad-wifi mood pocket interfered. Now I really want to see it due to Neds having defeated The King’s Speech to win the Best Film prize at the Evening Standard‘s British Film Awards in association with the London Film Museum.

Andrew Garfield won the org’s Best Actor award for his work in The Social Network and Never Let Me Go, and Kristin Scott Thomas won the Best Actress prize for her lead performance in Leaving.

Neds (i.e., “non-educated delinquents”) “draws on Mullan’s own experience of Glasgow’s gang culture,” says a British newspaper account. “[It has] a gritty realism which has sparked genuine clashes among rival gangs in Scottish cinema audiences.

“Presenting the award at a star-studded ceremony, actress Emily Watson — who has just made Steven Spielberg‘s War Horse with actor/director Mullan — said Neds was ‘raw and unflinching and very difficult to watch.’

“She urged Mullan, whose last film as director, The Magdalene Sisters, was released eight years ago, not to wait so long until his next.”

8 Comments
I Show You The Times

This happened last weekend in the state of Washington. The thief may simply be a skilled actor or perhaps even a sociopath. But he seems to me like one of the nicest felons ever.