What life’s natural process does to all of us in the end, even the luckiest and most beautiful and most magnificently endowed, is fairly horrific. I presume it’s understood that it was the love of Elizabeth Taylor‘s life, Richard Burton, who came up with the above nickname during the shooting of Cleopatra. 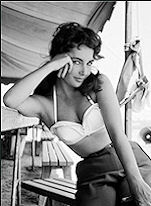 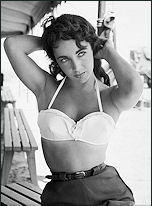 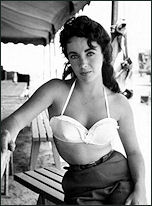 Within the next two or three days, I’ll become the very last guy in the column-writing, Bluray-reviewing realm to savor Criterion’s brand-new version of Alexander Mackendrick‘s Sweet Smell of Success (2.22). DVD Beaver‘s Gary Tooze says it “offers superiority” over the previous DVD “in every area…significantly smoother [with] distracting artifacts removed, scratches greatly minimized, contrast vastly improved…[and] quite a bit more information in the frame on all four edges…a magnificent transfer.” 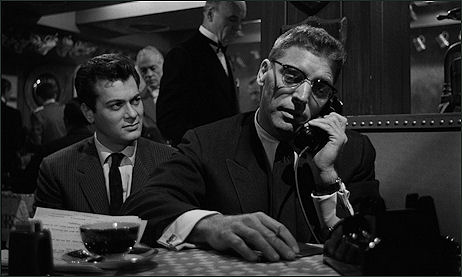 “The wonderful commentary [from] film scholar James Naremore is typically professional, insightful and informative…one of the best I have heard in this early year…he knows his stuff.”

This is an opportunity to re-post something I ran two years ago — a portion of screenwriter Ernest Lehnan‘s recollection of working with Sweet Smell of Success producer-star Burt Lancaster and his producer-partner Harold Hecht, as recounted in a Sam Kashner piece in Vanity Fair’s Tales of Hollywood: Rebels, Reds, and Graduates and the Wild Stories Behind the Making of 13 Iconic Films (Penguin). 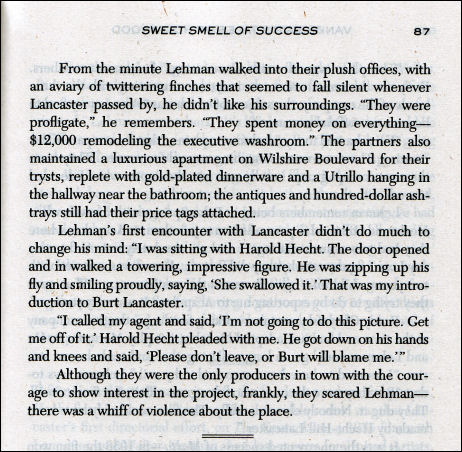 The Telegraph‘s Philip Sherwell, Robert Mendick and Nick Meo are reporting that during his last 18 days in power, deposed Egyptian president Hosni Mubrak “is understood to have attempted to place his assets — more than 3 billion pounds, although some suggest it could be as much as 40 billion — out of reach of potential investigators.

“On Friday night Swiss authorities announced they were freezing any assets Mubarak and his family may hold in the country’s banks while pressure was growing for the UK to do the same. But a senior Western intelligence source claimed that Mubarak had begun moving his fortune in recent weeks.

“We’re aware of some urgent conversations within the Mubarak family about how to save these assets,” said the source, “And we think their financial advisers have moved some of the money around. If he had real money in Zurich, it may be gone by now.”

In his 2.10 review of Unauthorized: The Harvey Weinstein Project, Toronto Star critic Peter Howell says director Barry Avrich “didn’t just pick a hostile target [but also] a moving one, which makes his film both very timely and somewhat the victim of circumstance.

“This time last year, everybody was playing taps for the career of Weinstein, whose Miramax Films had redefined the indie landscape in the 1980s and 1990s, with such hits as Pulp Fiction, The English Patient and Shakespeare In Love. By 2010, Weinstein was beset with debts for his struggling post-Miramax firm The Weinstein Company and deemed to be yesterday’s mogul.

“Now it’s 2011 and Weinstein is very much back in the fray, with a leading 12 Oscar nominations for his current smash The King’s Speech and a recent round of aggressive deals from Sundance.

“How does a filmmaker keep up with all of these fast-changing developments? Avrich’s answer is not to pretend to be the last word on the subject but instead to do a solid job telling the back story, not just about Weinstein but about the rise of independent film in general.

“Having explained Old Hollywood with 2005’s The Last Mogul, his doc on power player Lew Wasserman, he now does the same with Weinstein’s New Hollywood environs.”

“Harvey’s this fantastic enigma, this larger-than- life man,” Avrich recently told CBC News’ Margo Kelly. “He’s huge, he comes from a tough background, the exterior is extraordinarily gruff but he has the sensitivity of a swan when comes to making some of the great monumental foreign and indie films ever.”

Avrich’s documentary will soon screen on HBO Canada. IFC Films has the U.S. rights, and will presumably offer an on-demand option.

Which of the following unpronouncable, unspellable names is the title of an established Massachusetts-based film society that hands out annual awards?: (a) Klastchbuddlekin, (b) Colbustisch, (c) Chlotrudis, (d) Specialsphincter and/or (e) Axolotl?

Jay Roach will direct a dramatic adaptation of Game Change, John Heilemann and Mark Halperin‘s best-seller about the ’08 election, for HBO. Which means he’ll be casting actors to portray Barack Obama, Hillary Clinton, Bill Clinton, John McCain, Sarah Palin, John Edwards, Elizabeth Edwards and Reille Hunter. Question: If you were Roach would you reach out to Tina Fey to play Palin in a realistic, non-comedic, non-caricature vein, or would you start fresh with someone else?

“What’s ‘defining’ about The Social Network is the way it shows a generation losing touch with its humanity,” says Rolling Stone‘s Peter Travers. “The satire in Aaron Sorkin‘s script isn’t aimed at what you call the ‘cool kids,’ the creative, non-narcissistic users of the internet who don’t use ‘friend’ as a verb. They are in the minority.

“Who’s the majority? Go to any multiplex to see a movie — I just came back from Sundance — and you’ll see a lightshow of iPhones and Blackberrys at every performance. Not before or after the movie, but during. The guy next to me (from your generation) was checking his e-mail and updating his Facebook status. No apology. No shame. He just shot me a look. Like I wasn’t there. Like the audience wasn’t there. Like it was just him and a glowing screen.”