Earlier today Awards Daily‘s Sasha Stone, Boxoffice.com‘s Phil Contrino and yours truly poked at the last dying embers of the 2010/2011 Oscar season. We also discussed the box-office prospects of Hall Pass (which I’ll be seeing this evening at L.A.’s Arclight) and the ups and downs of The Adjustment Bureau (Universal, 3.4). Here’s a stand-alone link. A relaxed and lively session, I’d say.

You could argue that In Contention‘s Kris Tapley and Entertainment Weekly‘s Dave Karger are the most dispassionate Oscar-race handicappers. (“They’re almost like machines,” a friend said this morning.) So it’s weird that they’ve both chosen Rick Baker‘s Wolfman makeup to win the Best Makeup Oscar. What’s so special about the eyes, snout and teeth on Benicio del Toro‘s Larry Talbot? Nothing much. We’ve been dealing with hairy bipeds since the days of Henry Hull and Lon Chaney, Jr. I’m thinking that the makeup in Peter Weir‘s The Way Back has to win. 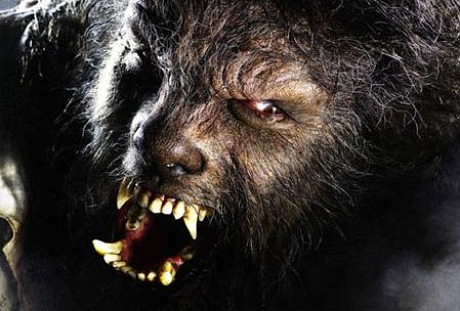 In Straight Time, Dustin Hoffman‘s Max Denbo explains the difference between being in prison and being free on the streets of Los Angeles: “Inside it’s who you are. Out here it’s what you have in your pockets.” Same analogy today. In New York City I had an image of refinement and accomplishment, based partly on my professional rep but also my personal appearance. Now I’m back to being a guy who drives a semi-beater, or what my son Jett calls a “ghetto car.” No valet parking, always parking two or three blocks away for fear of anyone identifying me as the owner of this thing, etc. Humiliating. 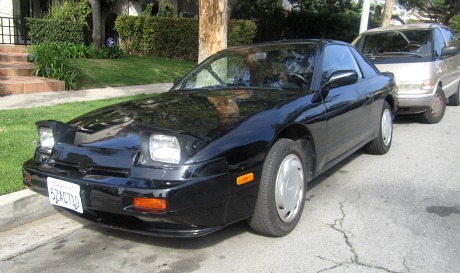 After attempting to attract unwashed Eloi moviegoers (i.e., those who wouldn’t know Joe Swanberg or Noah Baumbach from a giraffe) with an assurance that the cast of Arthur (Warner Bros., 4.8) is safe and familiar, WB marketers have stuck

their necks way out by admitting that Greta Gerwig has the lead female role. Or, in short, that she’s Liza Minnelli. 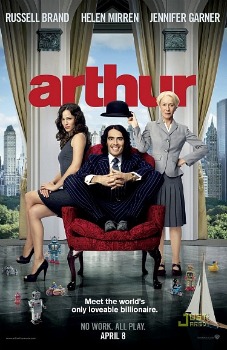 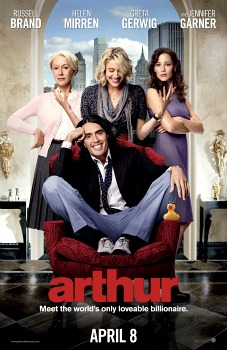 (l.) the Arthur teaser poster with Jennifer Garner, Russell Brand and Helen Mirren that was unveiled on or about 2.16.11; (r.) Gerwig added to the current version.

The original teaser poster, however, remains on the film’s website.

The Social Network “is shrewdly perceptive about such things as class, manners, ethics, and the emptying out of self that accompanies a genius’s absorption in his work. It has the hard-charging excitement of a very recent revolution, the surge and sweep of big money moving fast and chewing people up in its wake.

“From the first scene to the last, the film hints at a psychological shift produced by the Information Age, a new impersonality that affects almost everyone. After all, Facebook, like Mark Zuckerberg, is a paradox: a website that celebrates the aura of intimacy while providing the relief of distance, substituting bodiless sharing and the thrills of self-created celebrityhood for close encounters of the first kind.

“Karl Marx suggested that, in the capitalist age, we began to treat one another as commodities. The Social Network suggests that we now treat one another as packets of information. Zuckerberg, as interpreted by this film, comes off as a binary personality. As far as he’s concerned, either you’re for him or you’re against him. Either you have information that he can use or you don’t. Apart from that, he’s not interested.” — written four and a half months ago by New Yorker critic David Denby.

This had to be posted one last time, and I don’t care if anyone comments. The game is over either way. 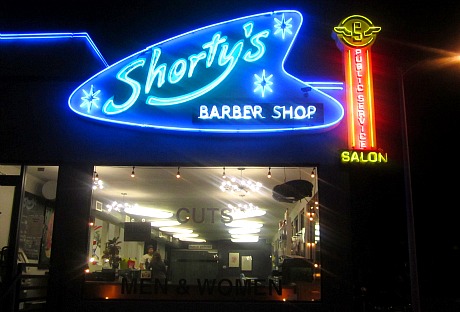 I do. Really. Listen to the Oscar telecast co-host singing “You Haven’t Seen The Last of Me” from Burlesque. It doesn’t matter if he’s naturally dreadful or if he’s doing an Andy Kaufman thing. Awful is awful. “They pulled this from the Oscar show,” Franco tweeted. “Damn it.”

Any way you slice it, bad singing is torture. Decent singing is about being able to (a) hit notes and to (b) phrase — to use your voice, however good or mediocre it is, to its best advantage. During her Velvet Underground days Nico, who had a fairly mediocre voice, sang within her limits very nicely.

I would never go within 75 feet of a karaoke bar, but I can sing “Be-Bop Baby” and “Your Smiling Face” in a reasonably competent way, mainly because they don’t challenge my abilities and because I can perform half-decent imitations of the original Ricky Nelson and James Taylor recordings.

15 Comments
For The Record

“If I were still doing ‘If We Picked the Winners’ with Gene Siskel, my preference for best film would be The Social Network,” Roger Ebert wrote about 12 days ago. “It was not only the best film of 2010, but also one of those films that helps define a year. It became the presumed front-runner on the day it opened, but then it seemed to fade. Oscars often go to movies that open after Thanksgiving. It’s called the Persistence of Memory Effect.

“There’s another factor. A lot of academy voters don’t choose the ‘best’ in some categories, but ‘the most advantageous for the movie industry.’ Hollywood churns out violent crap every weekend and then puts on a nice face by supporting a respectable picture at Oscar time. I mean that not as a criticism of The King’s Speech, which is a terrific film, but as an observation. A British historical drama about a brave man struggling to overcome a disability and then leading his people into World War II looks better to the academy than a cutting-edge portrait of hyperactive nerds.”

“If The Social Network wins Screenplay, Editing, Directing but then loses Best Picture it will join the ranks of only two movies in Oscar history to do so: A Place in the Sun and Traffic.” — Sasha Stone, Awards Daily, sometime last night. The film that beat George Stevens‘ Sun, along with Elia Kazan‘s A Streetcar Named Desire, was the very pleasant and colorful An American in Paris. Shameful.

This clip reminds that Anne Hathaway will be absolutely guns blazing as Judy Garland. In that 2013 or ’14 Weinstein-produced adaptation, I mean, of Gerald Clarke‘s “Get Happy: The Life of Judy Garland.” Glorious, manic-nutso, Oscar-calibre…the whole shot.

It was reported last December that production on the Garland biopic “has been pushed back to allow the actress and movie executives extra time to deal with the ‘sensitive project,'” whatever that means. “Work on the movie has yet to begin and Hathaway reveals production may not start until late 2012, to make sure the film correctly portrays Garland’s life story.

“Speaking on BBC Radio Four’s Front Row radio show, the actress says, ‘It’s a very sensitive project and there have been so many stories told about her life that we’re really trying to get it right. So we’re taking our time with it. I know it seems like it’s sort of an endless process but it’s very, very slow incremental steps. I had a meeting about it a couple of weeks ago and we’re all very motivated.’

Hathaway added that “I certainly don’t sing like Judy Garland…but I think people might cry murder if they don’t get to hear Judy’s beloved voice so the talk is for me to sing but I don’t know if that’s exactly what will happen.” Forget it — just use Garland’s voice and everyone will be down with that. Just because Hathaway has phenomenal pipes doesn’t mean she has to do her own singing. And she’s right — people will scream bloody murder if her Garland tunes don’t sound exactly right.