I happened to glance at The Piers Morgan Show a little while ago, and I couldn’t recognize the woman being interviewed. My first thought was Faye Dunaway but I discarded it a second later– this lady has had “work” done, but her face doesn’t have that extreme, over-stretched quality. Then I thought it was Alana Stewart Hamilton, Rod Stewart‘s ex. Wrong again. And then a title card appeared: Sharon Stone. She’s had decent work done, I’ll give her that, but she’s become someone else entirely. She physically no longer exists. 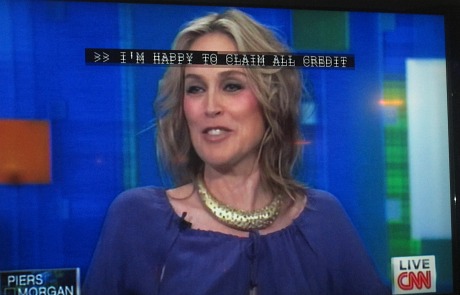 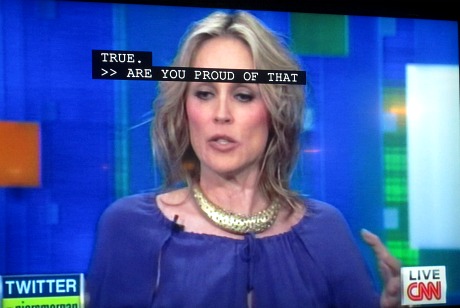 Any comedy that shows two characters fainting and falling backwards at the same instant is dealing really cheap cards. Any alien-encounter comedy that mentions Reese’s Pieces is looking to appeal to the lowest and stupidest people out there. It’s hard to understand how Greg Mottola (Superbad, Adventureland) could decide to willfully devalue his brand by making something like this. I can’t wait to see this with the hoo-hoo crowd at South by Southwest.

Last night I attended a q & a at the Writers Guild theatre with Susanne Bier, renowned director of the Oscar-nominated In A Better World (Sony Classics, 4.1), which had just screened. One of her most interesting answers came when a guy asked about the film not really saying one precise thing about pacifism vs violence and forgiveness vs. revenge, and whether her views on these subjects were less ambiguous than those in the film.

In my Sundance review I said that World “is like a moralistic cousin of Clint Eastwood‘s Unforgiven” in that Bier “shows us how violence can sometimes feel better and more ‘right’ than gentleness and compassion and turning the other cheek.

“By the finale Bier has shown us the upside and downside of gentleness and patience, and of angry brutality and push-back action. She’s clearly saying that we need to be strong and wise enough to not surrender to violent impulses, but she doesn’t make it an easy choice. Sometimes the Clint Eastwood blow-em-away approach is the right (or at least the understandable) thing to do, and sometimes not.” 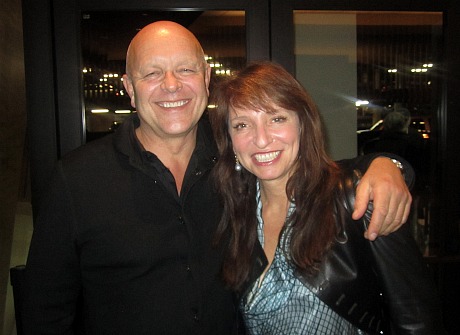 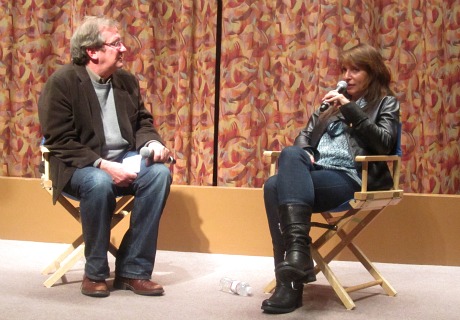 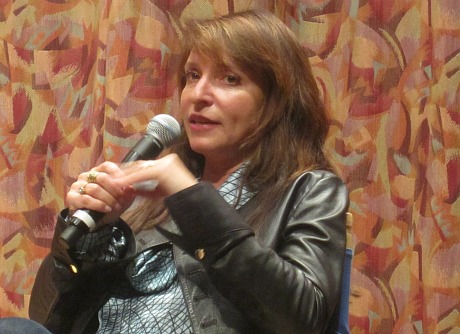 Scott Feinberg‘s “Narratives & Precedents” piece explains that over the last several decades performances that convey simple but appealing narratives have tended to win Oscars. Another conclusion is that inhabitings of selfish pricks — “a man experiences professional successes but personal shortcomings” is the narrative — tend to get nominated but don’t usually win.

Jesse Eisenberg in The Social Network is this year’s model. Feinberg mentions earlier manifestations like Orson Welles in Citizen Kane (’41) and Broderick Crawford‘s Oscar-winning turn in All the King’s Men (’49), but overlooks Kirk Douglas‘s Oscar-nominated performance in Champion (’49) — my all-time favorite prick — and Humphrey Bogart‘s in Treasure of the Sierra Madre.

The difference between these ’40s incarnations and Eisenberg’s performance is that the older guys paid a much heavier price for their selfishness. Welles’ Charles Foster Kane ended up lonely and isolated, Crawford’s Willy Stark was shot to death, Bogart’s Fred C Dobbs was killed by banditos and Douglas’s Midge Kelly died from injuries in the ring. Eisenberg ended up feeling badly about the girl he lost in the beginning of the film (and had always wanted to get back with) and was minus his best friend, but otherwise he ended up with billions. So the punishment was rather mild.

What I’ve always liked about Eisenberg’s performance is that you can feel all kinds of lonely hurt behind those curt phrases and chilly expressions, although he doesn’t overtly “express” them. It’s always the things that aren’t precisely said or performed that linger in the memory and seep in the deepest.

I’m trusting/assuming that the late Ronni Chasen will make the Oscars’ In Memoriam montage, despite the fact that no one in Eloi-land will recognize her face. Chasen really mattered to this town, so we’ll see what the Oscar producers are made of when this segment airs. Who won’t make the cut besides Tura Santana, Zelda Rubinstein, Eddie Fisher, Corey Haim and Erich Segal? I’ll be deeply offended if they don’t include Kenneth Mars, Maury Chaykin, Maria Schneider and Ronald Neame. The locks, I’m guessing, are Tony Curtis, Dennis Hopper, Jill Clayburgh, Irvin Kershner, John Barry, Arthur Penn, Dino De Laurentiis, Susannah York, Blake Edwards, Peter Yates, Gloria Stuart, Leslie Neilsen, Sally Menke, Lena Horne, Robert Culp, Lynn Redgrave, John Forsythe, Peter Graves, Anne Francis, Claude Chabrol, Pete Postlethwaite and Patricia Neal. That’s a total of 27 including Chasen and minus the unlikely five. How many names do they usually go with?

Never trust a teaser that tries to sell a sequel based on reviews of the original. That in itself suggests that The Hangover 2 (Warner Bros., 5.26) has issues.

Over the last year or so I’ve developed a small cancerous tumor because of Bradley Cooper, whose appearance on last June’s MTV Movie Awards proved that he’s a fizzy-souled showbiz whore. I was never that tickled with Zach Galifianakis‘ retard in the original, and now he looks icky-repellent with his head shaved. Ed Helms will be the only reason to see this thing. And fuck the monkey.

Clock-wise, Europe is a much better place to compose Hollywood Elsewhere riffs, and Los Angeles is probably the worst. if you’re in Cannes or Rome or Paris you can start working at 10 am and post your first story by 11 am or noon, at which point New Yorkers (i.e., six hours behind) won’t even be waking up for another hour or two, and Los Angelenos have just gone to bed. You’re way ahead of the game! But in LA you wake up every day in a losing position, always behind the New York crowd, never “first.” You might have the “most” in terms of original reporting or an interesting personality, etc., but “first” is what seems to matter to most readers. The only way you can turn L.A. to your advantage is to file at 11 pm or midnight, but I’m usually whipped at that hour.

I’m getting a deeply referenced, self-tilting, performance-art vibe from those James Franco-and-Anne Hathaway Oscar promo spots. It may as well be faced — these guys aren’t going to be that funny.

They’re obliged to be “out there,” of course, and do whatever they can, but I’m sensing very little to come in the way of machine-gun panache, nervy Billy Crystal-like broadsides, and/or Steve Martin-ish stingers. They’ve obviously decided to be the anti-Ricky Gervais duo. If you’re not willing to be cruel, what’s the point?

They’ll probably be “amusing,” okay, but all night long the invisible left-to-right crawl at the bottom of the screen will read “well…what’d you expect?” In a 2.24 Gawker piece titled “An Oscars Problem: Anne Hathaway Is Not Funny,” Richard Dawson wrote, “This is going to be a disaster. ”

Hathaway’s Madonna-as-Evita spot has me especially concerned. She’s imitating Madonna with the low-rent New Jersey accent and the “boom boom”…right?

From Gervais’s website, a sampling of Franco and Hathaway’s opening patter:

Franco: “You probably know me from 127 Hours where I play a man trapped in an enclosed space who decides he would rather cut his own arm off than stay where he was. Now that sounds ‘way out’ but wait ’til half way through this fucking ceremony and you’ll start to identify with him.”

Hathaway: “And I’m the new Catwoman. The first white woman to play that role since Michelle Pfeiffer. I want it to be an inspiration to all white people everywhere. Your dreams can come true in Hollywood too.”

Franco: “It’s a daunting task hosting The Oscars but we’re not alone. Presenting awards tonight will be a string of Hollywood legends and some other actors who have a film out in March or April.”

Hathaway: “Usually they hire comedians to host the Oscars, but tonight, instead, you get us!”