For me the funniest part of Todd Phillips‘ The Hangover was the photo sequence at the very end. That’s because it (a) revealed what had specifically gone down during the blind-drunk debauchery in Las Vegas, which looked funny, and (b) let us imagine the minute-to-minute action that happened before and after the snapping of each still. Nothing the movie depicted could match our imaginations in this regard. 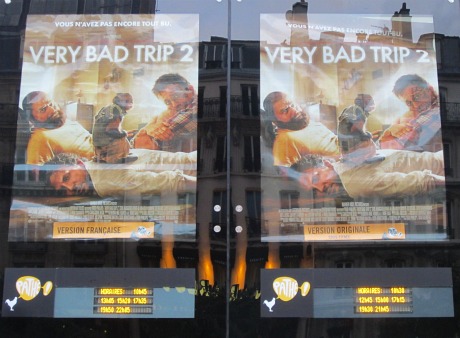 It’s the exact same deal with The Hangover, Part II, which I saw this evening at the Pathe Wepler at Place Clichy. The insanity-depicting series of photos at the very end are way funnier than anything in the film itself. Except that’s damnation with faint praise because none of the acted-out material in this Godforsaken sequel is funny. Nothing. I sat there like a tombstone through the whole thing. But the photo montage is cool. It didn’t make me laugh but I smiled a bit.

Imagining funny stuff is always…okay, often funnier than showing it. An example I’ve used before is the starving lion and the tail sandwich. A lion who’s dying for a meal is chasing a monkey around the jungle so he can eat him. Somehow there’s a lull and the monkey sneaks up beside the lion and puts the lion’s tail between two slices of bread and hands it to him. Scenario #1 shows the lion eagerly biting into the sandwich and roaring from the pain and chasing the monkey again. Not terribly funny. Scenario #2 shows the monkey handing the sandwich to the lion and then creeping away and hiding behind a tree, and after two or three seconds we hear the lion roar. Funny as hell.

The Hangover, Part II shows the lion biting into the tail and roaring really loudly and then pissing into somebody’s half-filled beer glass and then screaming “wait, what’s happening?” and then shouting “Teddy! Teddy! Where are you, Teddy?”

It’s not funny to repeat the same bits and jokes from the first film. Massive amounts of production funds are never funny, and wasting dough on a project like this is double-unfunny. Bradley Cooper isn’t funny. Ed Helms was funny in The Hangover but not here. It’s not funny when Zach Galifianakis‘s moronic man-child drives a speed boat up onto a beach at full throttle. In fact, it’s not funny to watch Galifianakis do or say anything in this film. Ken Jeong‘s cashew-sized penis isn’t funny. It’s not funny to see Paul Giamatti, who needs to grow some hair so he can return to his Miles look in Sideways, with a shaved head-top. (And looking fat.) Bangkok, which looks like a cesspool-choked combination of Jersey City, Newark and Dubai with a big canal running through it, is a deeply unfunny place. The whole film is about as funny as a preferred stock offering.

A few days ago several fanboy bloggers were shown JJ Abrams‘ Super 8 (Paramount, 6.10) and allowed to tweet their reactions. With this many cats out of the bag I guess I can say I’ve seen it too. An “almost there” version, I should add. I signed a non-disclosure form but surely at this stage I can say two brief things: (a) tonally it’s definitely a ’70s Spielberg trip through and through (although that was obvious in the first teaser), and (b) Elle Fanning, who turned 13 last month, is a real movie star.

There’s a moment when Fanning, who was good but mostly passive and nonverbal in Sofia Coppola‘s Somewhere, begins performing some dialogue for a super 8 zombie movie that her friends (one of whom is played by newcomer Joel Courtney, who’s also quite good) are shooting. And something just clicks when she lets go with that special vibe or deep-well charisma or whatever it is that some actors just have. The instant she begins saying the lines…pocket drop. A feeling of being anchored and practiced and on a certain level older than her years, and the camera knowing this. I said to myself, “Wow, she’s getting there fast.”

Kenneth Turan and Marshall Fine‘s dismissal of Terrence Malick‘s The Tree of Life, despite almost everyone falling for it in Cannes and a very strong 85% Rotten Tomatoes approval rating, tells me it may not figure that strongly in the Best Picture race.

And so what, right? Malick has never made an “Academy film,” and Life is probably, as Turan complains, too “opaque” for mainstreamers. It’ll be their loss at the end of the day. History will not look kindly. “Meh” was the farthest thing from my mind as I watched the first 40 minutes’ worth, and yet I knew, deep down, that the lack of a narrative through-line would be a stopper for more than a few.

“Look, I get it,” Fine says. “Malick makes the movies he wants to make in the way he wants to make them. He communicates visually and through indirection (as opposed to misdirection). In doing so, he summons surprising emotion, given how ephemeral his actual story-telling is. But impatience does accrue – not so much a feeling of ‘what’s the point?’ as ‘get to the point.’ The Tree of Life is a film that’s too precious and wispy, too insubstantial in its artiness, to be satisfying in virtually any way.”

I was more on the fence in my initial Cannes review. Life “does lose itself in its own impressionistic quicksand after the first half-hour,” I wrote. “It begins to drown, sink, swallow itself. The center cannot hold. But it’s entirely worth seeing (and praising) for the portions that clearly and unmistakably deliver. I’m especially referring to what people will soon be calling the 2001/Douglas Trumbull section. Who in the big-budget realm is even trying to make pure art films like this except Malick?”

According to Variety‘s Justin Kroll, Michael Mann will probably/eventually direct Go Like Hell, a period race-car film about Lee Iacocca and Carroll Shelby‘s successful attempt to beat the Ferrari team at Le Mans in 1966. Brad Pitt is reportedly interested in starring but is as yet uncommitted; if he does it I’m presuming he’ll play Shelby.

If it happens Go Like Hell will be the second expensive French race-track movie from a major American director, the first being John Frankenheimer‘s Grand Prix (’66), which I caught for the first time on DVD a couple of years ago. It feels a little bit bloated at 179 minutes but it isn’t half bad. In fact, it would be great to see a Bluray version as it was shot in 70mm.

There was also Lee H. Katzin‘s Le Mans (’71) with Steve McQueen, which bravely went with very little dialogue during the first half-hour or so and (consequently?) under-performed at the box-office. I can’t even remember if I’ve seen it or not…strange.

I suppose if I want to keep abreast I’ve no choice but to catch Very Bad Trip 2 (i.e., The Hangover Part II) at the Pathe Wepler this evening. “Largely mirthless…deeply square…cleaves numbingly to the script of the previous movie,” says N.Y. Times critic Manohla Dargis. What a thing to do while here.

I flew out of Venice’s Marco Polo airport this morning at 9:45 am. I’m now back in the Paris loft. So there’s this afternoon, tonight, all day tomorrow and Sunday morning until my Roissy bus leaves for Charles De Gaulle airport and the flight to JFK, almost exactly 48 hours hence. The following pics are my last Venice batch. 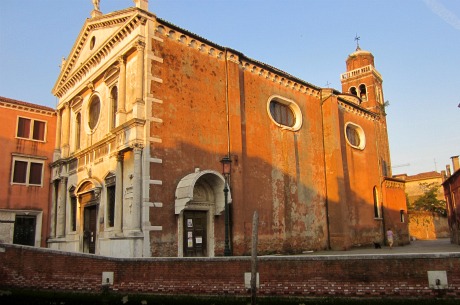 What I’d forgotten is how dead quiet Venice can be. If you stay away from the tourists in the San Marco district, that is, and keep searching your way into the smaller calles and backwater canals. There’s only the sound of the occasional barge or motorboat or taxi, and there’s even something soothing about that.

Through the barred bedroom window in the early morning, looking out at the green, overgrown back yard of my rented Venice pad (2403 Ca Guardiani in the Dorsoduro district), there’s nothing but the sound of softly chirping birds; it’s like being in some remote cottage near a Tuscan vineyard. I haven’t felt such peace and serenity since I last stayed there, in 2007. 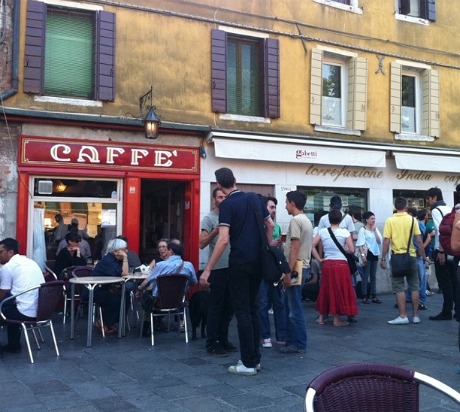 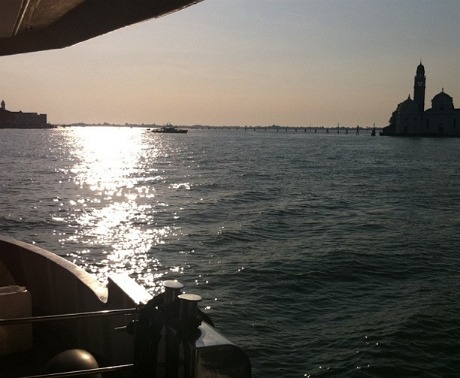 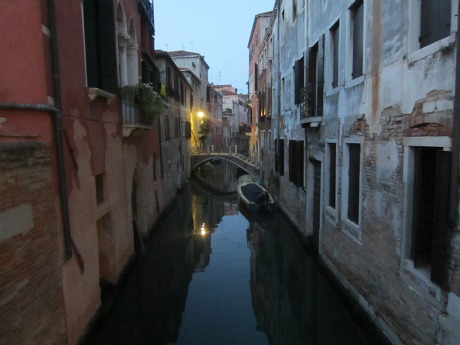 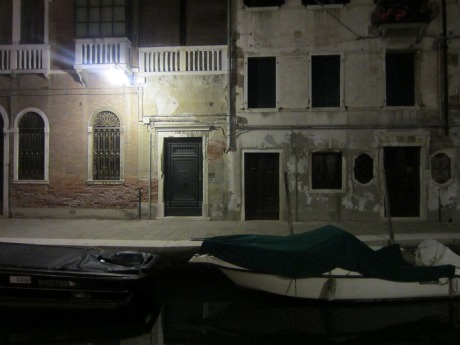