Here’s a hand-held, poor-quality video of the European redband trailer for David Fincher‘s The Girl With The Dragon Tattoo. “The Feel-Bad Movie of Christmas”! Love that Zeppelin.

Roger Ebert has derided The Hangover, Part II for using perhaps the famous Vietnam War photograph ever — a capturing of a South Vietnamese military guy shooting a Vietcong guy in the head — for laughs. He called its appearance during the still-photo section at the end “a desecration.” But Ebert didn’t complain about Woody Allen‘s using the same photo for satiric purposes in Stardust Memories . 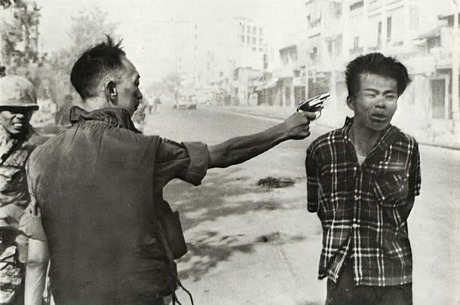 Allen’s character, a distracted film director, has a huge blowup of this photo in his living room in the film. It’s obviously a much smarter and more satiric use of the photo but it’s definitely meant to provoke and amuse.

If it’s okay for Allen to go there, you can’t fault Phillips for replicating the same photo, etc. Once a news artifact has been used in a comic-satric context, the toothpaste is out of the tube. Phillips imitated the shot to get an “oh, yeah” reaction from the audience, and Allen used the shot to say to the audience, “Look at how self-absorbed and angsty my character is.” Allen’s humor is on a much higher plane but he and Phillips basically did the same thing.

Couldn’t someone have claimed 40 years ago that Stanley Kubrick‘s using news footage of Nazi soldiers goose-stepping to the rhythm of Beethoven’s 9th in A Clockwork Orange was also a desecration?

So Ebert isn’t complaining about the photo per se being used for comic purposes — he’s complaining about the vulgarity and the coarseness of Phillips’ intent. Which most of us agree with. Phillips is shovelling mulch in this film. But I will defend to the death his right to use that photo for a laugh or whatever. Because he was only following Allen’s lead.

I’ve said two or three times that I don’t have to equate Lindsay Lohan with arrogant entitlement attitudes and self-destruction and drugs, etc. It was clear in Prairie Home Companion that she’s got that X-factor sparked, and it’s easy to believe that she leads a passionate life in all respects. She’s defintely interesting to stare at and contemplate. But until she does something besides go to court and listen to admonishments from judges then I don’t know what.

This video is supposed to invoke Brigitte Bardot and/or Liv Ullman. I would buy LiLo in a remake of Jean-Luc Godard‘s Contempt. I would buy her in a lot of things. She might yet have a chance to act in good films. But now and for the rest of her life she has to stop appearing in crap like Underground Comedy and I Know Who Killed Me and Machete and that whole cheeseball wink-wink thing. She has to go upscale and austere and…I don’t know, get married? Support a cause of some kind? Have a kid?

It suddenly turned cool yesterday. Late May into early to mid October. Jackets, sweaters, scarves. I was hoping that those dark clouds might lead to something because when Paris lets go with a good rainstorm things can get very torrential. 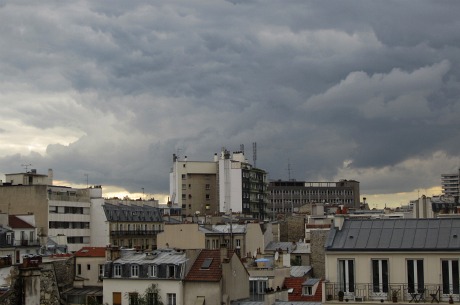 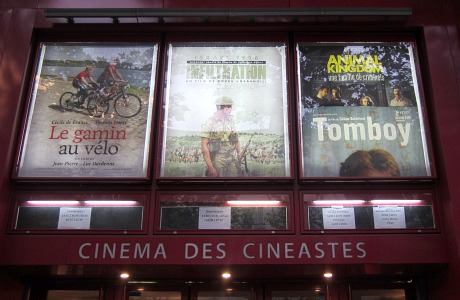 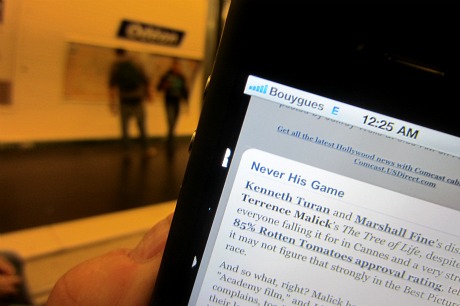 Joseph Gordon Levitt‘s 50/50 character has cancer, which means if he gets into the usual chemo and radiation he’ll be losing his hair. So…he decides to get a Full Metal Jacket Parris Island buzzcut so he won’t have to deal with it falling out in strands and clumps? I admire the brashness behind making a film with this kind of story, but this bit feels like a resignation.

It seems a fairly safe bet that 50/50 not My Life with Michael Keaton.

The pre-trailer intro explains that the story is based somewhat on the experiences of screenwriter Will Reiser (i.e., the little guy standing between costar-producer Seth Rogen and John Candy-sized producer Evan Goldberg).

The Summit marketing people are, of course, white-knuckle terrified about this thing, and about taking the blame if it under-performs or bombs. “You acquired the damn thing…it’s your fault!” “No, it’s yours…your marketing instincts are pathetic!” “Fuck you!” “No, fuck you!”

I’m With Cancer is a brave and rather cool title. Live With It is on the dull and depressing side. Filming ended in March 2010. It was probably finished in August 2010. So they’ve probably been test-screening it and biting their nails and pacing the boardroom for the last nine months. Hommina-hommina-hommina.