Support on Patreon Follow @wellshwood
12 Comments
Wait For It

Magnolia Pictures acquired North American rights to Fred Cavaye‘s thriller, “billed as an action film in the vein of Tell No One,” last February. Gilles Lellouche stars “as a man racing against time through the streets of Paris to save his pregnant, kidnapped wife,” etc.

The Lawrence of Arabia Bluray doesn’t come out until next year so Sony Home Video can say “50th anniversary” on the packaging. So N.Y. Times critic A.O. Scott is getting the jump or doesn’t care about timing or…oh, I get it: the Arab spring parallel.

Okay, so Rep. Anthony Weiner was dumb enough to tweet the bulge photo. That’s what I can’t get over — the rank stupidity of it. When Mr. Happy steps into the room, intelligence flies out the window. Thank goodness, at least, we have Andrew Breitbart and the professional right-wing hypocrite machine to remind us that sexual indiscretion is mainly practiced by liberals.

Regular, industrious, mild-mannered middle-class parents churn out mass murderers all the time…right? Totally routine, there but for the grace of God, Harris and Klebold’s parents had nothing to do with it, luck of the draw, etc. Bullshit.

With nothing else to write about and to accompany a trailer I hadn’t paid any attention to until a Donna Daniels p.r. person alerted me, I’m posting for the third time my three basic observations about Alex Gibney and Alison Ellwood‘s Magic Trip (Magnolia, VOD 7.1, theatrical 8.5). They were originally posted on 5.10.

One, Magic Trip is basically about new footage of the 1964 Merry Pranksters bus trip — that and very little else that illuminates.

Two, there’s no mention whatsoever of Tom Wolfe or his book that almost single-handedly sculpted the Kesey/magic bus legend, “The Electric Kool-Aid Acid Test.” How do you make a doc about the bus without at least mentioning Wolfe’s book, a definitive account in the same way that John Reed‘s “Ten Days That Shook The World” told the story of the 1917 Russian revolution?

And three, there’s only one mention of the word ‘enlightenment’ in the whole film and no down-deep discussion at all of what LSD did to and for people during the early to late ’60s. The latter strikes me as borderline surreal. How could Gibney not explore to at least some degree the currents churned up by LSD, which was indisputably the biggest influence upon artist-youth-spiritual seeker culture of the ’60s in a thousand different ways and wound up influencing damn near everything?

Imagine some magical circumstance by which images of Jesus of Nazareth and his disciples had been visually captured or rendered in some verite, first-hand way and then preserved and assembled for a documentary, and then the filmmaker decided to more or less ignore the fact that what these thirteen men did and said just over 2000 years ago in Judea resulted in a minor little thing called Christianity.

Slate‘s Christopher Beam and Jeremy Singer-Vine have used a database of post-1985 Rotten Tomatoes ratings to create a search engine called the Hollywood Career-O-Matic. What it basically says about career trajectories (other than re-posting the steady downward slump suffered by M. Night Shyamalan since The Sixth Sense) is that over time directors are more likely to experience critical upswings than actors. 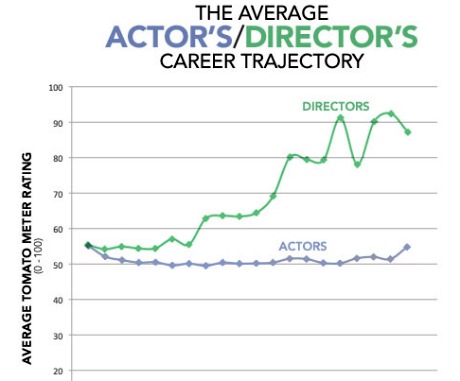 “What does the average Hollywood career look like?,” Beam and Singer-Vine ask. “In the Rotten Tomatoes database, more than 19,000 actors and 2,000 directors had their first film released in 1985 or later. The average actor’s critical reception gets slightly worse over the course of his first few movies, then plateaus. The average score for an actor’s first film is about 55 percent. By his fourth movie, that score slides to about 50 percent, where it hovers for the rest of his career.

“Directors’ careers follow a different trajectory. Like actors, a director’s first movie averages a Tomatometer rating around 55 percent. But the average ratings for the next few movies don’t drop much at all, never falling below 54 percent. Then, between the average director’s seventh and eighth movie, the Tomatometer ratings jump dramatically, from 55 percent to nearly 63 percent. That score stays steady for the average director’s ninth through 11th films and then jumps again to the 80s and 90s for the rest of his career.

“These trends seem to make sense. Most actors have to appear in good movies early in their career. Those who don’t risk being flushed out of the business. Once they’ve established themselves with a good film or two, they can safely make some bad ones. But all in all, they don’t have nearly as much control over film quality as directors do. Directors’ scores spike over time, presumably because only the best ones stick around long enough to make so many films.”

Slate‘s Hollywood Career-o-Matic tool can “map the career of any major actor or director from the last 26 years,” Beam and Siner-Vine explain. “You can also type in more than one name to plot careers side by side. For example, Paul Thomas Anderson vs. Wes Anderson vs. Pamela Anderson. Mouse over the data points to see which movies they represent.” Beam and Singer-Vine have “included only actors and directors who’ve released least five films between 1985 and March of this year, according to the RT data, to filter out thousands of bit-actors you’ve probably never heard of.”

Here’s the story according to paulreverehouse.org: “In 1774 and the Spring of 1775 Paul Revere was employed by the Boston Committee of Correspondence and the Massachusetts Committee of Safety as an express rider to carry news, messages, and copies of resolutions as far away as New York and Philadelphia.

“On the evening of April 18, 1775, Revere was sent for by Dr. Joseph Warren and instructed to ride to Lexington, Massachusetts, to warn Samuel Adams and John Hancock that British troops were marching to arrest them.

“After being rowed across the Charles River to Charlestown by two associates, Revere borrowed a horse from his friend Deacon John Larkin. While in Charlestown, he verified that the local Sons of Liberty committee had seen his pre-arranged signals. Two lanterns had been hung briefly in the bell-tower of Christ Church in Boston, indicating that troops would row “by sea” across the Charles River to Cambridge rather than marching “by land” out Boston Neck.

“On the way to Lexington, Revere alarmed the countryside, stopping at each house, and arrived in Lexington about midnight. As he approached the house where Adams and Hancock were staying, a sentry asked that he not make so much noise. ‘Noise!’ cried Revere, ‘You’ll have noise enough before long. The regulars are coming out!’

“After delivering his message, Revere was joined by a second rider, William Dawes, who had been sent on the same errand by a different route. Deciding on their own to continue on to Concord, Massachusetts, where weapons and supplies were hidden, Revere and Dawes were joined by a third rider, Dr. Samuel Prescott. Soon after, all three were arrested by a British patrol. Prescott escaped almost immediately, and Dawes soon after. Revere was held for some time and then released. Left without a horse, Revere returned to Lexington in time to witness part of the battle on the Lexington Green.”

Here’s the other version offered a couple of days ago by Sarah Palin.

I don’t necessarily agree with Emma Stone being honored as 2010’s Best Comedic Performance in Easy A, but I can tolerate the opinion. But imagine being genuinely convinced that The Twilight Saga: Eclipse was the best movie of 2010 on some level, and that Kristen Stewart and Rob Pattinson gave the year’s Best Female and Male Performances in that…God, that numbingly trite film! Jesus!

And if you weren’t genuinely convinced of this, imagine being willing to publicly and shamelessly declare this all the same on the MTV Awards. Imagine the green scum hanging in hunks and seaweed gobs on the stalagnites of your soul.

And imagine giving a Best Breakout and Biggest Badass award to Chloe Moretz for Matthew Vaughn‘s Kick-Ass while completely ignoring her even more breakoutty-badassed performance in Matt Reeves‘ Let Me In….imagine how breathtakingly stupid and shallow you’d have to be to make that call.

And imagine what kind of corporate-kowtowing whore you’d need to be to dream up the idea of giving Ellen Page the award for 2010’s Best Scared-As-Shit Performance in Inception when all she did was nail that role in a professionally assured, get-the-job-done sort of way, and at the same time ignore her truly electric superhero-geek performance in Super because of the MTV Awards’ idiotic focus on 2010 films only despite 2011 being almost half over.

And imagine giving an award to Grown-Ups costar Alexys Nycole Sanchez for 2010’s Best Movie Line (“I want to get chocolate wasted!”). Which is especially noteworthy given that Grown-Ups was directed by the notorious Dennis Dugan, whom Slate writers Christopher Beam and Jeremy Singer-Vine have just named as the Worst Director Since 1985 according to the Rotten Tomatoes careeromatic. (Dugan’s average rating is 23.6 %.)

Imagine being genuinely convinced that Reese Witherspoon deserves the MTV Generation award in the wake of having given her two least interesting performances in her two biggest failures, How Do You Know and Water for Elephants. Witherspoon’s career peaked six years ago when she won the Best Actress Oscar for Walk The Line, and she gave her best all-time performance 12 years ago in Alexander Payne‘s Election. Wait…is the MTV Generation award one of those “we know you’ve made some bad choices but we’ll always love you regardless” type deals?

Imagine being consumed by such sightlessness that you actually believe that one-note blondie Tom Felton gave a villain performance of any positive distinction in Harry Potter and the Deathly Hallows: Part 1.

If I genuinely believed that these awards were reflective of even half-serious merit (Emma Stone’s aside) I would be truly be damned and covered with invisible blisters. I would stroll around and make good money and smile all the time and vacation in Cabo San Lucas and Portugal and have children and love my ex-wives and find mysticism in my 50s, and when I die little red-eyed demons in black cloaks would snarl and growl and swarm all over me and take me down to hell.